FACT CHECK: Did Arthur Eze promise to mount 200,000 cameras in all polling units?

A screenshot making the rounds claims that the founder and Chairman of Atlas Oranto Petroleum, Prince Arthur Eze, has volunteered to mount 200,000 cameras in… 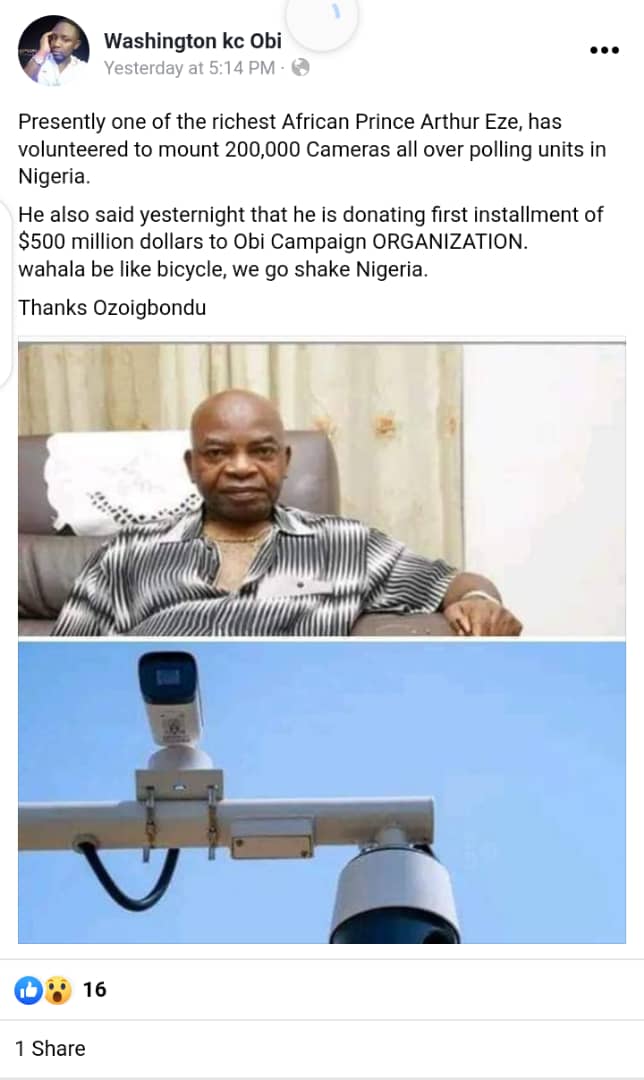 Wed, 22 Jun 2022 12:21:15 WAT
A screenshot making the rounds claims that the founder and Chairman of Atlas Oranto Petroleum, Prince Arthur Eze, has volunteered to mount 200,000 cameras in all the polling units in Nigeria.
It reads: “Presently one of the richest Africans and Prince Arthur Eze has volunteered to mount 200,000 cameras all over polling units in Nigeria and has said that he won’t be alive for Peter Obi to be rigged out. He also said yesternight that he is donating first installment of $500 million to Obi campaign organization, wahala be like bicycle, we go shake Nigeria. Thanks Ozoigbondu.”
FACT CHECK: Are gun-wielding protesters in viral video Fulanis from Nigeria?
FACT CHECK: Didn&#8217;t APC engage in vote buying as Ekiti Governor-elect claimed?
Verification
Preliminary checks by Daily Trust showed that the claim was made originally by a Facebook user, Washington kc Obi, on his page on 20th June. However, the post was edited in the screenshot and other information was added to it.

Currently there are 176,846 polling units across Nigeria as mapped out and demarcated by the Independent National Electoral Commission (INEC). This number is in contrast with the planned 200,000 cameras for all polling units stated in the claim.
Probing further, available information shows that one may pay about $600 to install four or more wireless cameras, a recording system, and Cloud and Smart capabilities. Analyzing this number and cost, it is established that the cost of setting up 200,000 cameras is equivalent to $3 million.
According to multiple sources, Arthur Eze’s net worth is estimated to be around $5.8 billion. Although the amount for installation of the cameras including the claim on donating $500 million for Obi’s presidential campaign would not be difficult for Prince Eze to provide, it should be noted that he did not make the claim as circulated by social media users and blogs.
Conclusion
Daily Trust can confirm that there is no evidence that Prince Arthur Eze made the claim. The information should be disregarded by members of the general public.
This fact check was done in partnership with the Centre for Democracy and Development (CDD)