For long, journalists have relied on eyewitnesses’ accounts for a good deal of their reportage. During the violence that erupted in the wake of the… 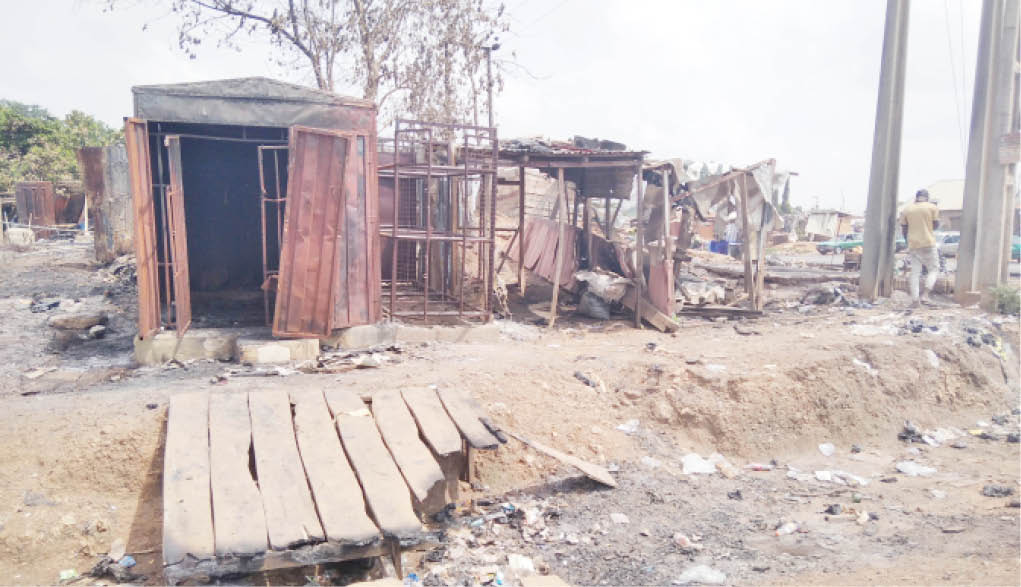 A cross-section of the roadside market destroyed in Pigba

For long, journalists have relied on eyewitnesses’ accounts for a good deal of their reportage. During the violence that erupted in the wake of the #EndSARS protests in Abuja, several ‘eyewitnesses’ on social media claimed they had seen churches and mosques torched. Those reports, as Daily Trust finds out, are far from the truth.

As the dust raised by the #EndSARS protests settles, government and private citizens have started counting their losses. The peaceful protests calling for an end to police brutality veered into violence when it was hijacked by hoodlums who attacked protesters.

Amidst the violence, there were claims of the crises degenerating into a religious conflict with the media awash with reports of churches and mosques burnt in some communities.

Abuja, the seat of power, had its share of violence and according to eyewitnesses, police highhandedness in dispersing protesters and the free rein of allegedly sponsored hoodlums led to a breakdown of law and order.

The profiling of hoodlums in Abuja as Hausa-Fulani while those in Lagos as simply thugs at first threatened the united voice with which the youth-led protest vented its anger on police brutality.

But the simmering anger that brought the youth to the street could not be slaked by pockets of divisive comments.

First, misinformation came in and then the violence.

There were unverified reports that religious buildings were torched at Apo, a suburb in Abuja and Dutse in Bwari area council, two communities severely scathed by the violence.

With the reports making it into newspapers, it indicated that journalists did not visit the scenes to ascertain the facts. Most of them relied on “eyewitness accounts” and social media posts.

One such post was by Judith Sewuese, @seweclaire, who stated that “There was serious tension around Sokale roundabout Abuja, more thugs/hoodlums came in vehicles and right now they burnt cars, water tanks, shops and a church is on fire, can’t tell if it’s @dunamis church Dutse that is on fire no (c)ite of Nigerian police.”

It can be deduced from the post that it intended to inform and warn people on what was happening at the location but not all the information was true.

It was confirmed that vehicles and roadside shops were burnt in the community, however, no church was affected, as claimed in the post.

When Daily Trust visited, the Dunamis Church at Dutse Sokale bore no sign of destruction and a church service was being held.

Also, when our reporter asked around, residents denied there was an attack on religious facilities in the community except for a pastor who was killed by a mob.

The pastor was said to be on his way to work when he was caught up in the violence. However, efforts to identify and locate his family did not yield any result as those asked said they could not figure out who he was since his wallet and other useful information about him were carted away by those who attacked him.

In the same vein, the mainstream media failed in its role of factual reportage of events.

A check at the online platform of the Nation and the Guardian Nigeria showed both published reports without quoting sources and the reports were worded similarly, suggesting that one platform plagiarized the other.

According to the report, “at least, three persons were feared killed and many others injured in the Dutse Alhaji area yesterday as thugs continued to unleash mayhem in the Federal Capital Territory (FCT), Abuja. The Dutse Makaranta Police Station was set ablaze by the suspected hoodlums. Also torched were a church and a filling station. They vandalized several vehicles and shops in the area.”

Punch was also caught up in the fad as it also said a church was razed during a clash between security operatives and hoodlums.

However, checks showed that neither a church nor a filling station was torched in the area.

Chief Gade told Daily Trust that the police were trying to quell the violence at Apo Junction and Kabusa when another clash erupted in his community.

For a Twitter user, Phoebe Ozioma, @Phiozy, the clash led to “Redeem church at Apo Waru, Abuja burnt down.” While a Daily Trust report on Tuesday, October 20, said it learnt that a mosque was burnt down in Pigba Sama area of Apo while “eyewitnesses” claimed a church in Waru area was also set on fire.

To verify this, our porter visited the community and confirmed that a mosque was burnt in Pigba. The mosque was located in a roadside market thus was caught up in the burning spree by violent hoodlums.

A search for the church burnt did not yield any result when our correspondent visited Waru. But the District head said a church was attacked with just the window smashed.

So, was the burning as a result of a lack of religious tolerance in the community? Chief Gade said it was not due to religious intolerance but a tribal clash as Igbos and Hausas in the community targeted businesses owned by one another.

“The whole event was between Hausa and Igbos living in the community,” said the Village Head of Pigba, Chief James Dogo.

He stated that the burning of the car stands at Apo Mechanic Village spilt over into the community.

“A Mercedes car selling herbal medicine was set ablaze after the car stands that belonged to mostly Igbos in the community were set alight. Thereafter, the taxi used by the Hausa and a settlement that was in the market was set ablaze, which then affected the mosque.

He stated that the Hausa speakers engaged in reprisal attacks by burning some shops belonging to Igbo traders, including his own, which was rented out.

“The burning was vice versa. I was by the roadside trying to calm the situation but was hit and had to go back to my house when I was informed of my loss. But I learnt that one of the hoodlums who was involved in the burning at the mechanic village was chased and ran into the community for safety at his brother’s,” he said.

Chief Dogo said the hoodlums who instigated the violence were not from the community but ended up destabilizing the peaceful coexistence residents had enjoyed there.

He added that he tried to maintain neutrality as the head of the community and had to lodge some people who were vulnerable during the event at his home.

“Some Igbo boys and Hausa who had their shops destroyed slept in my house that Monday night. I had to camp them in my house because I discovered that if they were on their own that day, something terrible would have happened,” he said.

He explained that calm was finally restored after soldiers were deployed to the community adding that series of meetings have been initiated for peaceful resolution of the crises.

As residents of the affected communities begin to rebuild their lives, journalists need to go beyond relying on statements of eyewitnesses. The credibility of the media depends on its accurate and factual report of events, as such all reports need to be verified to uphold the core of principles of journalism.