In recent times, the quality of Nigerian graduates has come under question, with many saying a large chunk of those churned out of the university… 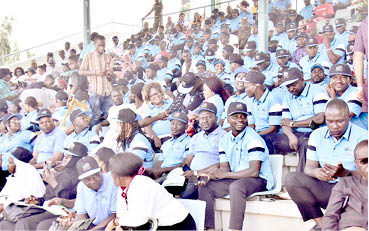 In recent times, the quality of Nigerian graduates has come under question, with many saying a large chunk of those churned out of the university system yearly does not meet the requirements of industries.

However, some think otherwise. They believe that there is nothing wrong with Nigerian graduates and that they can compete favourably with others elsewhere.

Irrespective of the high number of graduates with First Class, Second Class Upper and other honours being churned out, especially from public universities, the unemployment rate has been on the increase as many could not secure white-collar jobs.

It is no longer news that the Nigerian university system has been bedevilled with challenges of poor infrastructure, inadequate lecturers, poor equipment, lack of laboratories, poor funding and, the more critical problem at the moment, the incessant strikes by the Academic Staff Union of Universities (ASUU) over the failure of the government to meet their demands and proper university funding.

As a result, the quality of education has also taken a dive for the worse compared to what was obtained in the 70s – a situation that has placed Nigeria as one of the top countries with the highest education migrants.

This is against what obtained in the past when children of both the poor and rich studied in many Nigerian universities and obtained quality education.

However, experts, educationists and students have raised concerns on the quality of Nigerian graduates as a result of the many challenges they have to go through to attain a first degree.

A student of the University of Abuja, Ferdinand Azu, said before, he would have argued that it is not true that the quality of graduates is low, but with what is going in the education system now, “I think those that are going to graduate henceforth are going to be of much lower quality.”

“We learn under harsh environments and strict conditions, and as if that is not enough, we go on strike for months, and by the time we are back to school, they will use one or two weeks to rush us to prepare for examinations. So lectures that should have taken months are done in under two weeks. How do we learn what we are supposed to,” he wondered.

He said, however, that: “We are intelligent but many factors are working against us. I have seen students who are considered dull but abroad they do well and some even get recognition because the conditions of study are favourable there.”

Azu also said with the challenge of ASUU, more low-quality graduates will soon flood the country.

Another student, who wants to be identified as Mary, said the quality of graduates will continue to be low until the right things are done.

“We have lecturers who would not be serious until the dying minutes; they would come and rush students, and in most cases, the course outlines are not covered. So they set exams on what they are able to cover and ask students to read others,” she said.

To worsen the matter, now with the ASUU strike, Mary said the calendar is destabilized. “Once they call off, they will rush students: at the end of the day, the aim will be to pass and graduate, but not to gain adequate knowledge.”

“Many of us forget many things after examination. You can imagine now we have been at home for months, with some of us engaging in businesses and others learning skills. And many are definitely not thinking about studies anymore because they are making some little money,” she said.

Mary believes that if the quality is low now, then those to be graduated later will be even lower. She pleaded that ASUU calls off the strike so that “we can at least graduate and face another phase of our lives.”

An educationist, Michael Sule, told the Daily Trust that it is not surprising that Nigerian universities produce poor-quality graduates because they have to contend with unmotivated academic staff.

He noted that the government was not helping matters as it engaged in white elephant projects, leaving the educational section to suffer.

“The poor quality of graduates is a simple reflection of the quality of the academic staff of our universities today,” he said.

He said our universities have been underfunded for decades and, like a talented but under-achieving football team, they fail to achieve goals because the country hasn’t invested enough in the structure, facilities, and people.

“Of course, decades of neglect will not be remedied in a year. There are competing demands for government funds, but there must be a strong political will to improve universities yearly and make education a long-term priority. That will help Nigerian graduates to be competent and productive outside the university,” he said.

For Professor Ben Ugwoke of the University of Abuja, the quality of graduates from universities is a function of many factors.

He said, the first is the admission criteria and that the conduct of admissions on a quota system determined by regional and or ethno-religious basis instead of merit has a negative impact on education.

“In this country, admission to study certain professional courses like medicine, engineering, law, architecture and some others in some public universities is the exclusive preserve of people who are from certain backgrounds, rather than allowing a merit-driven system to flourish,” he said.

“What quality would you expect from a system that tramples on merit, but celebrates mediocrity in the name of a quota system created on parameters that have no bearing on excellence in education?’ he asked.

Another factor that affects the quality of graduates, according to him, is their performance in the world of work is the adequacy or otherwise of the curriculum of study.

“There seems to be a wide gap between industry requirements and the curriculum currently in use in Nigerian universities. The National Universities Commission (NUC) must necessarily match industry needs with curricula. Yes, there must be a total overhaul of the current content of the courses or subject offerings in our universities to fit their graduates for the highest performance in their places of work,” he said.

“Yes, there is a difference between our curriculum and what other countries do offer in their undergraduate programmes. There is so much emphasis on theory in our curriculum, but this places our graduates in a vantage position in research conduct.”

He said they could easily explain why results obtained are the way they are and this ability is not so much entrenched in students from other climes where the emphasis is on meeting industry needs through skills. “I conclude by saying our students compete favourably well in other climes, even with what you call the challenges of our university education system.”

He, however, refuted that ASUU strikes may further dwindle the quality of graduates, saying, “The only negative effect is the age of graduation of students from the university. I do not think strikes negatively affect the performance of graduates because the content that ought to be covered during strike periods is still covered the moment strikes are suspended.”

Meanwhile, Prof. Nasiru Idris of Nasarawa State University, Keffi, has a different opinion, saying the types of graduates Nigerian universities produce are well in line with the requirements of industries not only in Nigeria but also globally.

He said the university curriculum in Nigeria has met the minimum requirements as stipulated by most industries.

While noting that theories in classes are complemented by practical work in laboratories and field work, he said all professional courses have mandatory industrial training in year four, which is taught by the staff of the industries during the students’ training programme for either six months or one year.

On the ASUU strike affecting the quality of graduates, he said: “The university system has its uniqueness. This is because when ASUU is on strike, the system is paused until the strike action is suspended.

Therefore, academic activities will resume where they stopped. As far as I am concerned, with information technology in place today, a serious student will even acquire more information about his courses upon school resumption.“