It was excitement galore on Monday when President Muhammadu Buhari, commissioned the much talked about $1.5 billion Lekki Deep Seaport, in Lagos.  The Lekki Deep… 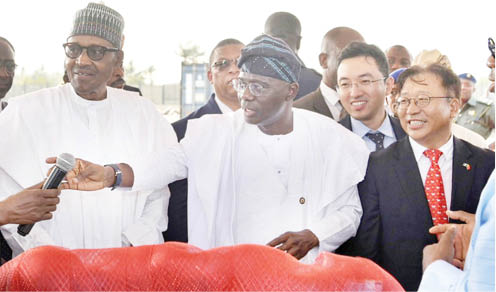 It was excitement galore on Monday when President Muhammadu Buhari, commissioned the much talked about $1.5 billion Lekki Deep Seaport, in Lagos.

The Lekki Deep Sea Port which encompasses an investment in excess of $1.5 billion is a joint venture between the Federal Government through the Nigerian Ports Authority (NPA), Lagos State Government, the Tolarams Group (the owner of the Lagos Free Zone), and China Harbour Engineering Company.

The development of Lekki Deep Sea Port was conceptualized to meet significant gap in projected demand and capacity. Market studies indicate that the demand for containers is expected to grow at a CAGR of 12.9 per cent  up to 2025. However, given the expansion constraints on the existing infrastructure, the capacity in Lagos is incapable to meet the growing demand. The capacity shortfall for container terminal facilities in Lagos is projected to be 0.8 million TEUs in 2016 going up to 5.5 million TEUs in 2025. The strategic location, flexible and optimized layout and modern facilities provide Lekki Port a distinct competitive edge over any other port facility in the West African region.

According to the owners of the port, Lekki Port LFTZ Enterprose Ltd, in addition to bridging the capacity deficit, Lekki Deep Sea Port will have significant positive impact estimated at USD 361 billion over the term of concession. It is expected to contribute more than USD 200 billion to the government exchequer and create close to 170,000 new jobs. Furthermore, Lekki Port will spur the economic development around the Lekki sub-region and the wider Lagos State through rapid industrialization.

NIGERIA DAILY: Rail, Road, Air Overwhelmed, Where Do Nigerians Turn To For Transportation?

The Project enjoys a development structure that is first of its kind in Nigeria. This is the single largest private investment in infrastructure in Nigeria being developed on non-recourse project finance basis with majority of financing being raised internationally.

Other economic impact expected from the port include Direct and induced business revenue impact of US$ 158 billion, qualitative impact on manufacturing, trade and commercial Sservices Sector

The port has three terminals, which are the container terminal, the liquid terminal and the dry bulk terminal.

According to the promoters, the container terminal has an initial draft of 14 metres, with the potential for further dredging to 16.5 metres. The terminal is able to handle 2.5 million twenty-foot standard containers per year.

The deep-sea port of Lekki is the first port in Nigeria with ship-to-shore cranes. It has three of these container gantry cranes; they belong to the “Super-post-Panamax” group – this means that they can reach and unload the rearmost row of containers even if the container ship is wider than the Panama Canal (49 m or 160 ft maximum boat beam).

The STS cranes have a fixed rail at the quayside. They can lift 65 tons in twin-lift mode, 50 tons in single-lift mode or 85 tons under a hook.

The port’s computerised system will allow container identification and clearance from the office, and human interaction will be minimal in the physical operations

When the phase 2 is completed, the deep sea port will have three liquid berths. The liquid cargo terminal will handle vessels up to 45,000 DWT (dead weight tonnage) and can expand to reach a capacity of 160,000 DWT.

Liquids (like petrol or diesel) will be handled at a tank farm near the port. The docking area is equipped with loading arms. It is also connected by pipelines along the breakwater.

The bulk terminal with available quay length of 300m can accommodate a Panamax class vessel (75,000 DWT).

The President, who arrived the port in company of the state Governor, Mt. Babajide Sanwo-Olu, around 4.40pm inspected the  quay side, the ship yo shore (STS) cranes and the breakwaters before he eventually commissioned the port.

Daily Trust reports that the port would be ready for commercial operations before the end of the second quarter of 2023. The first vessels which brought the STS cranes berthed at the port in July 2022.

The CMA CMG vessel that arrived the port on Sunday with empty containers was to test run the port facility would be the second vessel to berth at the port.

Before the commissioning, the President was received by Lagos State Governor, Mr. Babajide Sanwo-Olu, his deputy, Dr. Obafemi Hamzat and members of the State Executive Council.

Speaking at the commissioning Lagos State governor, Mr. Babajide Sanwo-Olu, described the project as the biggest infrastructure in the whole of West Africa, adding  that it would generate thousands of jobs in the country.

He said the multi- billion naira project was a collaboration between the Federal Government and Lagos State government as well as the private stakeholders.

He expressed joy that the execution of the project which took off under Buhari’s administration was completed during his tenure.

He, therefore, thanked the President for his commitment to development of the country and appreciated all those contributed immensely to bringing the project to reality.

In his goodwill, the Managing Director, Nigerian Ports Authority (NPA), Mohammed Bello-Koko, said port is indeed a dream come true, not only for Lagos State but for the entire country because of its capacity to grow the economy of the nation and to grow it’s propensity to create over 170,000 jobs

“Some African countries have approached us to say that they would want to be bringing in their cargos through Lekki Deep Seaport. We are still discussing with them,” he said

“I tell you that Lekki Deep Seaport is just the beginning of many good things to happen to Nigeria. I want to thank President Muhammadu Buhari for actualizing this dream” he said.

Also speaking, the Director General of the Nigerian Maritimer Administration and Safety Agency (NIMASA), Dr. Bashir Jamoh, Bashir Jamoh, thanked God for making it possible for him to witness the emergence of one of the best ports in Africa.

According to him, the maritime industry is one of the key area to pursue in quest for the development of Nigerian economy.

The Executive Secretary, Nigeria Shippers Council (NSC), Emmanuel Jime promised to strictly monitor the efficiency of the kind of services that will be delivered at the port.

Commissioner for Commerce and Industry, Mrs Lola Akande, said the port would  complement the infrastructure development in Lagos State, and further strengthen the description  of Lagos as industrial hub of Africa.