Premier League strugglers Wolves have finally got their man, appointing “number one choice” the former Sevilla and Spain boss Julen Lopetegui as their new manager… 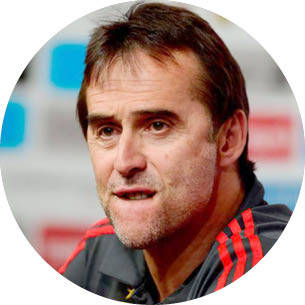 Premier League strugglers Wolves have finally got their man, appointing “number one choice” the former Sevilla and Spain boss Julen Lopetegui as their new manager on Saturday.

“The vastly experienced Spaniard, who has worked in coaching and management for nearly 20 years, will begin his first Premier League role on Monday 14th November,” a club statement confirmed.

The 56-year-old replaces Bruno Lage who was sacked last month after a run of one win in 15 Premier League matches, going back to last season.

Wolves chairman Jeff Shi said: “Julen is a top coach, with excellent experience at an elite level of the game, and we are very pleased to have agreed a deal to bring him to Wolves.

“Since the very beginning, Julen has been our number one choice to manage Wolves, and we look forward to welcoming him and his team when they join us in the coming weeks.”

Wolves, languishing one off the foot of the table, are currently under the care of interim manager Steve Davis.

He was expected to remain in temporary charge until the new year after QPR manager Michael Beale rejected the chance to move to Molineux.

Lopetegui had also initially snubbed an approach for personal reasons, before changing his mind.

He was the national coach for two years but was abruptly let go on the eve of the 2018 World Cup for accepting to take over at Real Madrid once Spain’s interest in the tournament was over.

The Real Madrid post did not work out well as he lasted just 138 days in the job, the end coming after a chastening 5-1 Clasico defeat by Barcelona.

Lopetegui was most recently sacked after a three-year spell with Sevilla in October, the axe falling after a 4-1 home thrashing by Borussia Dortmund in the Champions League.

A former goalkeeper – Lopetegui played for Real Madrid and Barcelona and won one cap for Spain – he arrived in June 2019 and took the Andalusian side to a record sixth Europa League title in his first season.

Wolves will be hoping he can bring some of that magic to Molineux, with the Chinese-owned midlands club hosting Brighton later Saturday with a meagre record of two wins from 13 outings this term leaving them on 10 points, one ahead of bottom-side Nottingham Forest.

Three familiar faces await him at his new workplace.