Shocking footage of football legend and current Cameroon FA President, Samuel Eto’o attacking a man outside a stadium at the World Cup in Qatar has… 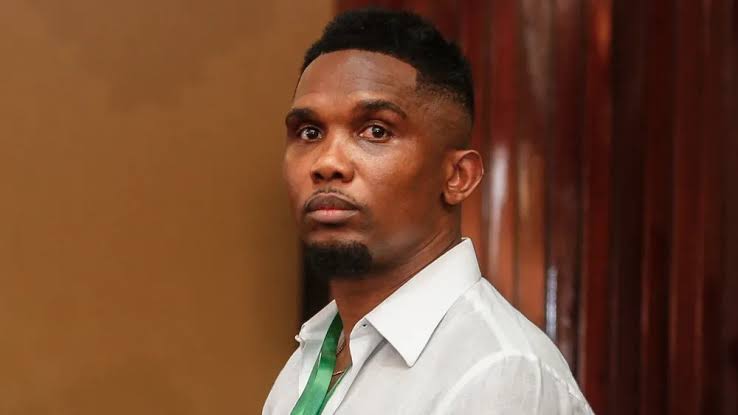 Shocking footage of football legend and current Cameroon FA President, Samuel Eto’o attacking a man outside a stadium at the World Cup in Qatar has emerged online.

The clip shows the former Barcelona, Inter Milan and Chelsea striker leaving Stadium 974 in Doha, after watching Brazil romp to victory against South Korea in their round-of-16 match.

While leaving Stadium 974 after the match, Eto’o initially seemed to be content taking selfies with fans as he walked.

But in the footage, the 41-year-old became agitated after exchanging words with a man holding a camera.

A clearly fired-up Eto’o walked down the camera man before being initially held back by four other onlookers.

While the man with the camera, who is said to be a YouTuber according to the Daily Mail, was being led away, he stopped to crouch down, just as Eto’o shook off those trying to calm him.

In a shocking scene, the former Chelsea frontman ran up to the YouTuber, and kneed him full in the head.

Despite the force of the blow, the man managed to quickly rise to his feet, with Eto’o being led away from the scene.

After the incident, it emerged that it may have been sparked by an argument regarding Cameroon’s qualification for the World Cup.

The Indomitable Lions booked their place in Qatar with a victory over Algeria earlier this year.

Algeria were left furious with the refereeing during the second leg of the play-off.

Eto’o, who won 118 caps for his country between 1997 and 2014, is now president of Cameroon’s Football Federation.

He has been in Qatar watching his team, and decided to attend last night’s match despite Cameroon having been knocked out last week.

The Indomitable Lions lost 1-0 to Switzerland before drawing 3-3 with Serbia.

A creditable 1-0 win over Brazil last Friday was not enough to see them through to the round of 16.

In addition to his role with the Cameroon Football Federation, Eto’o has also been in Qatar in his role as a “legacy ambassador” for the tournament.

The former striker has been seen rubbing shoulders with FIFA president Gianni Infantino.