#EndSARS: Many victims unaccounted for, unpaid after billions of naira compensation award

Two years after the #EndSARS protests in Nigeria, in which the establishment of the judicial panels of inquiry to determine the extent of human rights… 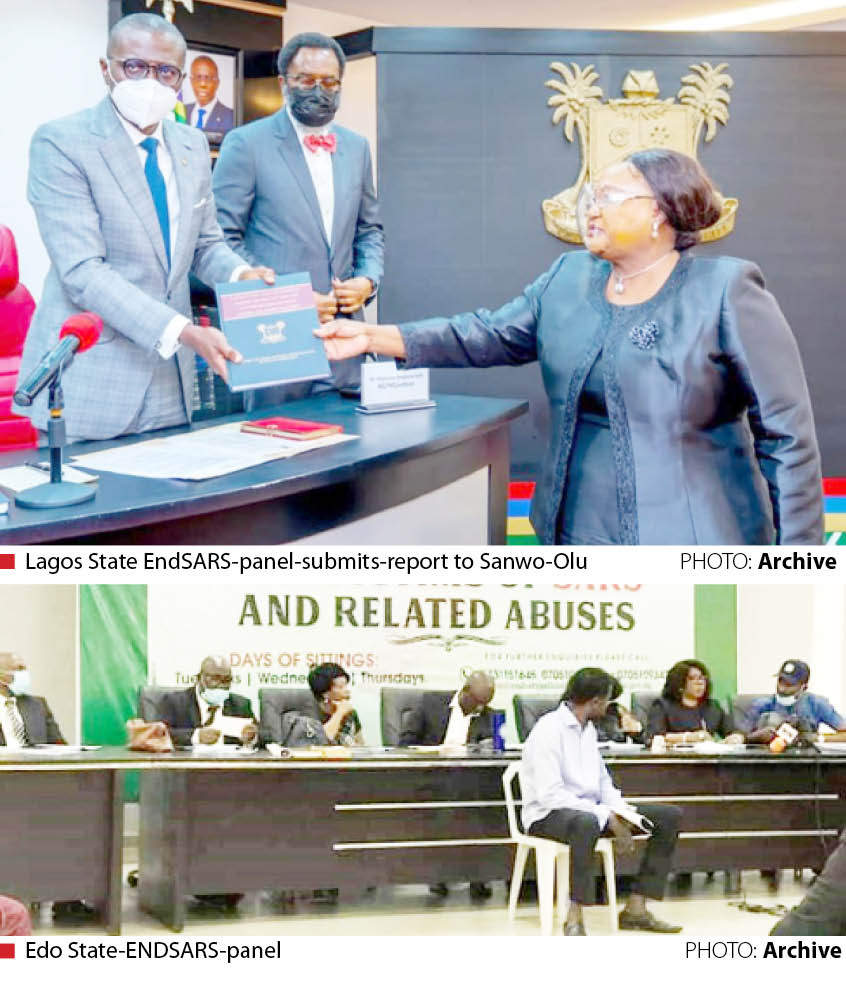 Two years after the #EndSARS protests in Nigeria, in which the establishment of the judicial panels of inquiry to determine the extent of human rights abuses, awarded billions in compensation, many of the victims have not been rewarded.

The report submitted by panels in many states of the federation has also not been implemented.

For instance, while states like Bayelsa, Rivers, Abia and Imo, did not pay compensation to victims of the #EndSARS protest despite receiving reports of the Judicial Panels of Inquiry (JPIs), Lagos, Kwara and Ekiti paid to the tune of N410m, N180m and N21m respectively.

Only seven states – Borno, Yobe, Zamfara, Kebbi, Jigawa, Niger and Sokoto, did not set up the panel on police violations of human rights.

To commemorate the deadly events of October 2020, memorial rallies were billed to hold on Wednesday in Jos, Port Harcourt, London, Toronto and Montreal, and the Lekki Toll Gate in Lagos.

The Lagos panel submitted a 309-page report to the Lagos State governor, Mr. Babajide Sanwo-Olu, which indicted the army, police, and the Lekki Concession Company (LCC) for various crimes, ranging from killing innocent protesters to attempting to conceal evidence.

The federal and Lagos State governments had at various times maintained that there were no deaths at the Lekki tollgate, effectively absolving themselves of any blame in the October 20, 2020 incident.

However, the panel of inquiry found that 48 casualties were recorded at the tollgate, including 11 deaths, several missing persons, and many injured persons. It said 96 other corpses were presented to it by a forensic pathologist, Professor John Obafunwa.

The incident attracted international attention with the United Nations (UN) and the United States, among others calling on both the federal and Lagos State governments to ensure the implementation of the White Paper on the report.

Reading the position of activists on the memorial of the October 20, 2020, #EndSARS protests on Wednesday, Ayokunle Oni made a six-point demand, which among others asked the Federal Government of Nigeria to respect the dead and heal the wounds of the events of that day “by tendering an unreserved apology with a “Never Again” commitment.”

“It has been established by a government-instituted panel that beyond all reasonable doubt, there was a massacre of harmless citizens on 20.10.2020, at Lekki Toll Gate and other parts of Lagos. It can also be said without any doubt that Nigerians were killed in different states as well, at different times during the mass movement,” he said.

The activists demanded compensation for all #EndSARS victims and family members for the deaths, injuries and physiological or mental ill health suffered by thousands of protesters.

He said, “The killers in uniform who murdered unarmed, peaceful citizens at the barricades are not unknown. The Lagos State Judicial Panel of Inquiry named some of them. They must be brought to justice. We must stop the culture of impunity and state terrorism. To do this, those who killed peaceful protesters at the Lekki Tollgate and elsewhere during the #EndSARS protests must be prosecuted.

“We thus unequivocally call for open trials of every ranking officer involved in the despicable killings. We make bold to say that since the Nuremberg trials of Nazi war criminals, a universal consensus has been established that there can be no excuse for carrying out heinous crimes, such as massacres.”

“Government should rise to its duty and make known the important lesson the society is supposed to learn from that incident, come forward with the white paper as soon as possible and pay compensation to those who have been found deserving,” he said.

On his part, Comrade Patrick Eholor, human rights activist and the founder of One Love Foundation, described the non-implementations of the panel reports as anti-people.

“If the governor was serious, he ought to have known that people lost their lives, properties were destroyed. There would have been a white paper report to conclude investigations and compensate victims.”

Also speaking, Comrade Ralph Okhiria, the former chairman of the Edo State council of the Nigeria Union of Journalists (NUJ) and a member of the panel, expressed concerns that more than one year after the submission of the panel, the state government was yet to implement the recommendations.

“As one of the members of the panel, I am concerned that the governor is yet to implement the recommendations arrived at for whatever reason which we don’t know.”

Recall that the judicial panel under Justice Ada Ehigiamusoe (rtd) had recommended N288 million as compensation for victims of police excesses in Edo State.

Also speaking, Marshal Abubakar Esq of Femi Falana Chambers confirmed to Daily Trust Saturday that many of their clients, who were victims of the #EndSARS protest and other cases of police brutality, were not paid compensation.

‘Some protesters still in detention’

The group also seeks the immediate release of all arrested protesters and justice for all arrested victims of police brutality and compensation for their families, as well as setting up an independent body to oversee the investigation of all reported police misconduct (within 10 days).

The group said about 32 people are still being incarcerated over the #EndSARS peaceful protests with more lists yet to be uncovered.

“Thus, we demand the immediate release and dropping of all charges against every #EndSARS victim already identified as being incarcerated for no just cause; enabling full access to prison records for concerned lawyers and NGOs to document all those incarcerated on bogus charges to facilitate their release.”

The Amnesty International has disclosed that no fewer than 40 protesters are still being detained in jails since 2020.

More revelations about the #EndSARS killings came at the ongoing Corona’s Court hearing in Lagos when a witness, whose name was shielded from the public, testified that 150 inmates of the Nigeria Correctional Centre Ikoyi were shot dead by a special squad.

The president of the African Women Lawyers Association, Amanda Demechi Asagba, who is representing some of the victims of the attacks in court, told Daily Trust Saturday that the correctional centre’s authorities, however, denied the figures but admitted 20 inmates were shot.

According to the witness, who said he worked at the educational unit, for Muharam Sisters, an NGO, and taught the English language to inmates of the correctional centre, he heard gunshots in his cell D5 on October 22, 2020, at about 11.59pm and rushed out to see an armed squad shooting at inmates.

“After all the shooting, we were transferred by an armed squad. We were told that the last person in the queue would be shot, which was what happened.

“They also shot Ifeanyi, governor of Cell D7 when we were transferred to the cell. Some of us were chosen to carry the dead bodies to the hospital within the centre.

“There were more than 150 corpses excluding the injured, after which we observed starvation for two weeks with no food and little water.”

The witness mentioned Promise Nnuigwe from Cell B2, Raphael Olusola (D8) and Ifeanyi (D7) as inmates who were among those killed that day, that he could remember.

He said that before the incident that day, there was calm and peace in the centre.

Further hearing at the court was adjourned to 19th and 20th December 2022.

Why states have not paid

In Rivers State, the state government did not pay any victim of the #EndSARS protests as Governor Nyesom Wike made it clear on the day of the inauguration that there would be no payment of compensation for victims. The government, however, doled out N20m each to families of police and other law enforcement personnel who lost their lives in the hands of hoodlums.

The Commissioner for Information in Edo State, Andrew Emwanta, said he cannot comment on why the state government has not paid the compensation awarded to EndSARS victims.