Hoodlums were again on rampage Thursday morning at about 11am, when over one hundred youths stormed the Asaba High Court complex on Ibusa road by… 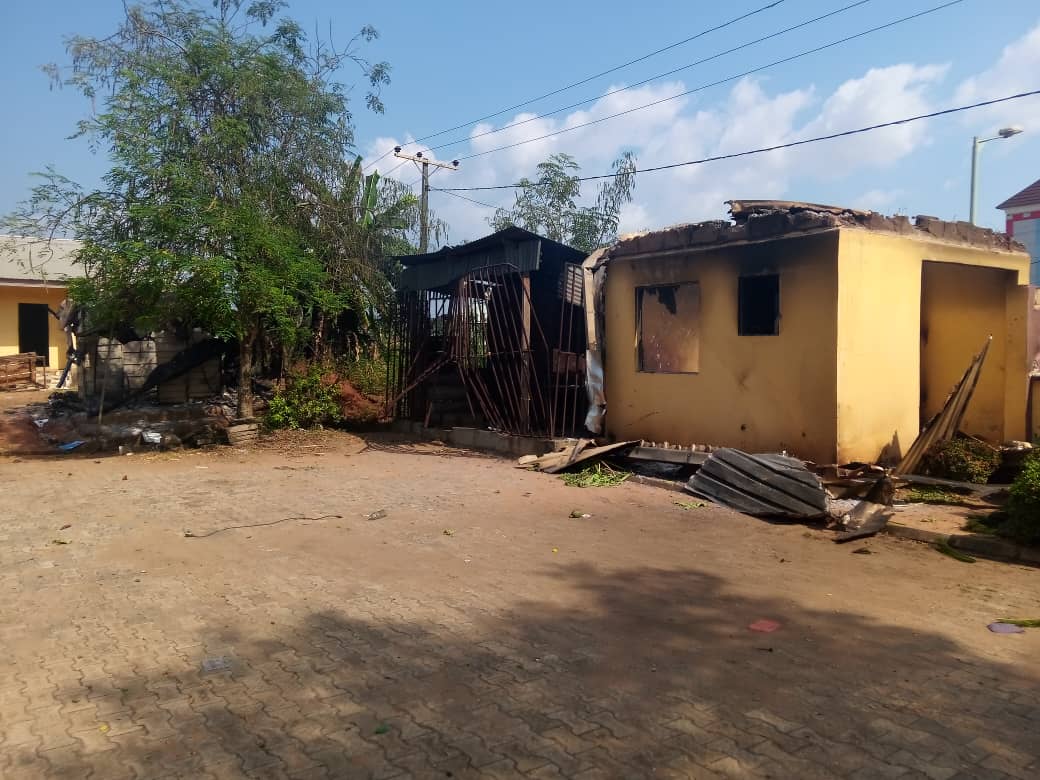 A part of the bunt Asaba High Court complex

Hoodlums were again on rampage Thursday morning at about 11am, when over one hundred youths stormed the Asaba High Court complex on Ibusa road by Koka expressway junction and set the entire complex on fire.

Daily Trust reliably gathered that two male staff of the court, who had intervened to retrieve some vital documents which the arsonists heaped on the main road to set them fire, were hacked to death.

According to an eyewitness, the staff had snatched some of the files from the burning heap of rubble and ran towards the complex perimeter fence but both of them were pursued by the mob and macheted to death.

Another eyewitness lamented the bizarre development, saying that the rampaging hoodlums had an uninterrupted two hours, causing havoc at the court complex.

When Daily Trust visited the scene, a detachment of soldiers had mounted guard at the precincts of the smoking court but vehicular and pedestrian movements were not restricted.

Also, the state Fire Service team had arrived belatedly as there was nothing useful left from the fire that could be recovered.

While the fire raged, the rampaging hoodlums proceeded to the heart of the city chanting protest songs.

Delta State Governor, Senator (Dr) Ifeanyi Okowa, had imposed a 48-hour curfew in the state following Wednesday night’s arson and destruction of government property in Asaba by the anarchists disguising as protesters.

The governor had said the curfew would commence at 6 p.m. Thursday, while also announcing the closure of public and private primary and secondary schools in the state until November 2, 2020.

He noted that the peaceful protests by #ENDSARS protesters had been hijacked by suspected criminals, and stated that the state government would not watch the elements to have a field day.

He appealed to parents and guardians to ensure that their children and wards were properly accounted for, and urged traditional rulers and opinion leaders to lend their voices to the appeal.

He urged youth leaders, community mobilisers and social media influencers to have a rethink on the protest in the interest of the nation.

“My dear people of Delta State, it has become necessary for me to address you following the unfortunate turn of events in our nation.

“In all my communications with you in the last two weeks, I have consistently maintained that the #ENDSARS protest is a laudable one that has drawn national attention and outcry to the brutalities Nigerians, particularly the youths, have endured in the hands of the now disbanded Special Anti-Robbery Squad.

“I commend our youths for rising to the occasion and organising themselves in such an impressive and spectacular fashion.

“The nation heard your voices loud and clear, and all that now remains is for both the National and sub-national governments to take appropriate remedial measures, which includes embarking on total and comprehensive reform of the Nigerian Police and our governance systems.

“Unfortunately, unlike what we are seeing in the last two weeks, cases of arson, looting and other violent conducts have crept in.

“It does appear that the #ENDSARS protest has been hijacked by some misguided and opportunistic elements.

“This sad situation threatens to plunge the state into chaos and anarchy.

“It is a clear and present danger that we must stop from happening; only last night, some government buildings were burnt in Asaba,’’ he said.

Okowa stated that following the directive of the National Economic Council, he had inaugurated a Judicial Panel of Enquiry to investigate cases of police brutality in the State, and had also set up a Victims Support Fund.

He expressed confidence that justice would be served and that grieving families would be able to have succour when the panel concluded its work.

He appealed to the youths to remain calm, law-abiding and give peace a chance.