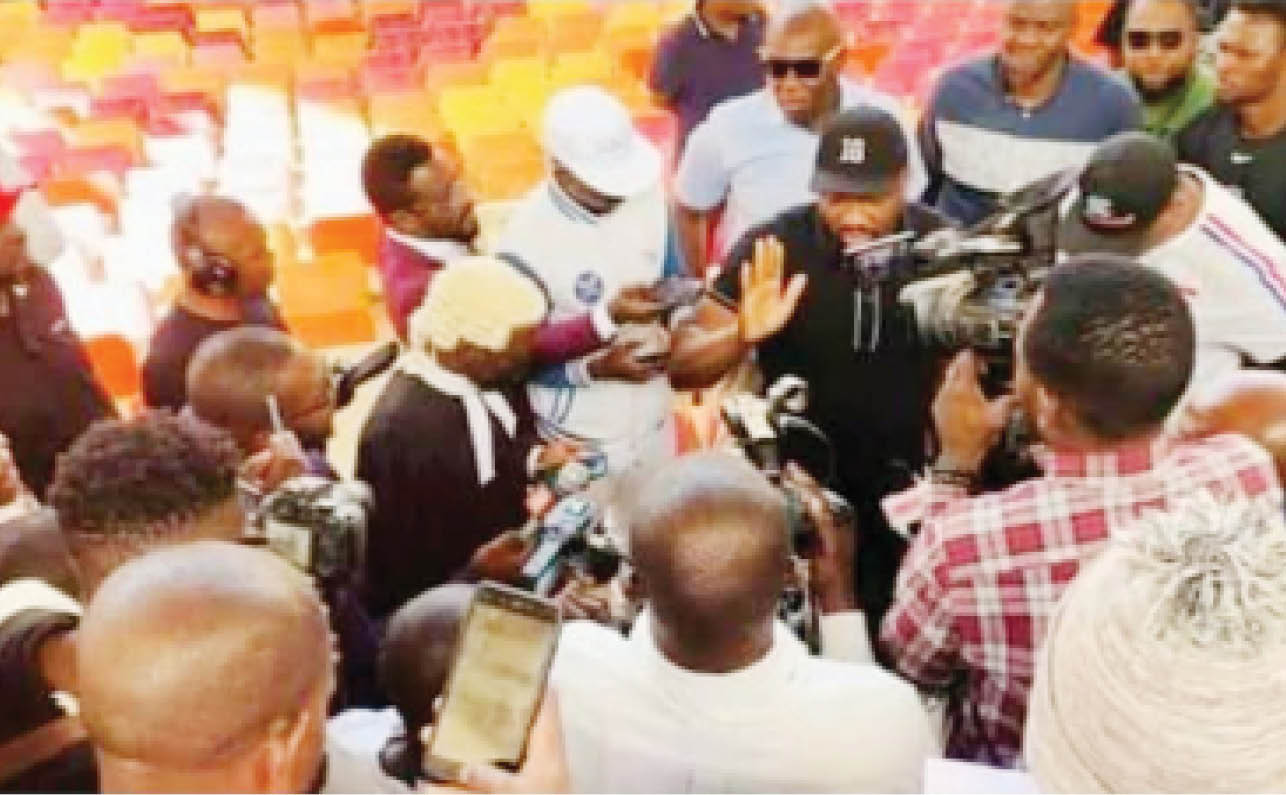 Most of the sports federations are expected to operate in line with the constitutions approved by the international bodies they are affiliated to, but the federations are usually enmeshed in crises due to leadership tussles.

It is almost impossible to witness rancor-free sports federation elections in the country. This unfortunate development has impacted negatively on sports development. Those entrusted with the running of the federations spend more time chasing after shadows while neglecting their primary responsibility of developing their respective sports.

Daily Trust on Sunday, therefore, takes a critical look at the affairs of some of the sports federations in Nigeria that have become synonymous with crises.

Unarguably, football is the number one sport in Nigeria. It is followed and supported with passion by Nigerians, who have continued to show unwavering support for it, even in bad times.

Unfortunately, football, which unites the country and is said to serve as the opium of the poor Nigerian masses, is constantly in the news for the wrong reasons.

At the moment, there seems to be false serenity in Nigerian football. This is because Ambassador Chris Giwa, who had vowed to unseat the incumbent NFF president, Amaju Pinnick, must have decided to channel his energy and resources into other profitable ventures.

It would be recalled that soon after the Super Eagles’ unsatisfactory performance at the 2014 World Cup in Brazil, the then NFF president, Aminu Maigari, made moves to seek a second term in office, but following pressure on him, which included threat of arrest and prosecution for corruption, he sheathed his ambition. He subsequently threw his weight behind the one-time chairman of the Delta State Football Association, Amaju Pinnick, who eventually emerged the NFF president at the controversial election that was held in his hometown, Warri.

His main challenger, Ambassador Giwa, instantly went to the Federal High Court to challenge his election as NFF president. The court eventually sacked Pinnick and ordered that the litigant should take charge of the running of Nigerian football.

Expectedly, there were concerns that FIFA would ban Nigeria and the Super Eagles would be ruled out of international competitions. So, after Giwa held sway briefly, there was presidential intervention.

A series of meetings took place between the warring factions and the Ministry of Sports. There were reports that an agreement had been reached for Giwa to be compensated with an appointment. However, he didn’t get any appointment. How Pinnick got off the hook is still not clear.

Although Pinnick’s re-election in 2018 in Katsina State was not as contentious as the 2014 election, there were certainly clandestine moves to stop him from retaining his plum job. But having ‘bought’ the congress as it was widely believed, Pinnick was able to secure the second term that had eluded his predecessors like Alhaji Ibrahim Galadima, Alhaji Sani Lulu Abdullahi and Alhaji Aminu Maigari.

At the moment, there is an uneasy calm in Nigerian football. Although Pinnick has not come out to say he is interested in running for a third term, the feeling among football stakeholders is that he wants to continue in office.

When the controversial emergency NFF congress, which was held on August 8, 2021 in Benin City, approved the proposal by its executive committee for an amendment of the 2020 statues, those opposed to Pinnick’s alleged third term ambition concluded that the amendment was for tenure elongation.

It was against this background that a group led by Pinnck’s most vocal critic, Harrsion Jalla, petitioned the Presidency, the Federal Ministry of Sports and FIFA to oppose the proposed amendment of the NFF statues. That action didn’t go down well with some supporters of the NFF president, who have since embarked on mobilisation of support to neutralise any form of opposition against the alleged third term ambition.

There are concerns that if the amendment is carried out, the present board of the NFF would stay beyond its expiry date of September 2022. It is said that the plan is to move the next NFF election to 2023 so that it would be held after the World Cup in Qatar.

Presently, Nigerian football stakeholders are waiting with bated breaths to see the next move by Pinnick, who had declared publicly that he won’t be gunning for a third term.

What is going on in Nigerian football now is a silent war as the different factions continue to plot their graphs ahead of the next NFF election.

The Athletics Federation of Nigeria (AFN) has also had its own fair share of crises that have continued to torment it. Beginning from 2017, the federation, which was established in 1944, has not known absolute peace. It all started with the election of Ibrahim Gusau as president when Solomon Dalung was the minister of sports.

Gusau’s action triggered a series of battle for leadership that lasted up to 2021. Supported by Dalung, Gusau was said to have masterminded the suspension of Olamide, on the allegation that he was involved in a doping scandal as levelled against him by Folasade Abugan.

After Olamide’s suspension, the integrity of the AFN leadership under Gusau was brought to question when the case of the World Athletics’ missing money erupted. In order to exonerate himself, Gusau personally invited anti-graft agencies to investigate the matter, and this obviously upset some of the top officials in the Federal Ministry of Sports.

Curiously, the suspension of Olamide was lifted and he was restored to his position on the board of the AFN. The first thing he did was to ensure that Gusau was removed as president. He named himself the new president of the federation. In addition, he became the good boy of the new Minister of Sports, Sunday Dare, who had inherited the crisis. Meanwhile, Gusau became an outcast, maybe for daring to order an investigation into the missing World Athletics money. Two factional presidents had inevitably emerged.

After a series of intervention by the World and Africa Athletics governing bodies, it was agreed that a fresh election that would unify the warring factions be held on June 14, 2021, in line with the 2017 constitution of the AFN.

Following irreconcilable differences over the constitution, the Gusau – led board, which refused to back down, conducted its election in Birnin-Kebbi, while the other faction backed by the Federal Ministry of Sports conducted its own election in Abuja and produced the chairman of the Delta State Sports Commission, Chief Tonobok Okowa, as president.

Before the two factional elections, Olamide, who felt he was used and dumped by the sports ministry, attempted to rock the electoral process by accusing the ministry of dabbling into internal the affairs of the AFN.

Gusau, who is holding firmly to the AFN constitutions of 2017 and 2019, is insistent that the election in Abuja is illegal. He believes that only the president of the AFN can authorise the convening of the congress of the federation.

But in a surprise twist, the World Athletics, during the 2020 Tokyo Olympics, tacitly endorsed Okowa by sending to him, the password for the official email of the federation to open correspondence between both bodies. The World Athletics would later say it recognised the Abuja election that produced Okowa as AFN president, leaving Gusau in a quagmire.

In 2009, the NBBF had no constitution, so the Ministry of Sports under Malam Bolaji Abdullahi appointed Malam Tijani Umar to serve as the federation’s president. In 2013 when he sought re-election, the sports ministry, in conjunction with the International Basketball Federation (FIBA), had drawn up guidelines for the election.

Interestingly, Musa Kida, an engineer, then a member of the FIBA Finance Committee, decided to run against the incumbent, Tijani Umar. Under controversial circumstances, Umar secured a second term, which led to more crises in the NBBF.

However, upon assumption of duty as minister of sports in 2015, Solomon Dalung decided to set up a sports reform committee to come up with a viable framework on how sports federations in the country should conduct their affairs, including elections.

It was this reform committee that recommended that for basketball, instead of only 11 delegates, all the 36 states of the federation and Abuja should be directly involved in voting in the elections. The recommendation was adopted by the Ministry of Sorts.

Towards another election in 2017, amidst the raging controversy over the Kwese league sponsorship money, amounting to millions of naira, Umar convened a general meeting to pass as draft constitution, which had in it a clause for life presidency of the NBBF. This angered most basketball stakeholders, who in turn kicked against it.

Clarion calls by aggrieved members for the Umar-led executive to reconvene another meeting to review the document fell on deaf ears. Consequently, both the sports ministry and the FIBA refused to recognise the constitution.

Thus, as the 2017 election approached, the ministry, convinced that the NBBF had no constitution, went ahead to organise the election in Abuja, which was supervised by the Nigeria Olympics Committee (NOC). While Umar held a parallel election in Kano, Kida was returned unopposed in Abuja.

That led to the emergence of two factional presidents, an unfortunate development that has impacted negatively on the development of the sport.

Backed by the ministry, Kida took charge of national teams while Umar was in control of the domestic league. At a point, Umar and Kwese, sponsors of the NBBF league, went to court to stop Kida from organising the domestic league. This stalled domestic basketball league for four years.

Things became so messy that Nigeria suffered an international embarrassment when the two factions presented two national teams at a tournament that was held in Benin Republic.

The FIBA, in its wisdom held separate meetings with Umar, the Kida-led NBBF, the Ministry of Sports and the NOC. In the end, the international body recognised the Kida-led NBBF and included his name on its website.

As further validation, when the NOC held its election in Yola, Adamawa state, FIBA impressed on the NOC that the legitimate NBBF leadership is the one led by Kida. Subsequently, the NOC allowed the NBBF to participate in the election.

With the dust not fully settled, the 2021 NBBF election was to be held in Benin City on November 30. The process was on, but following unresolved issues bothering on constitution and guidelines for the election, the Federal Ministry of Sports, which had announced that the 2017 constitution as sanctioned by the FIBA would be used for the election, turned round and ordered an indefinite suspension of the electoral process.

In a quick reaction to the position of the ministry, Kida threatened to go ahead with the election as planned, but after a series of meetings with the government and other stakeholders, he backtracked.

It is said that he was a guest of one of the anti-graft agencies following allegations of corruption levelled against him by the opposition camp. There have been accusations and counteraccusations over money that accrued to the NBBF during the tenures of Umar and Kida.

While the two warring factions have gone back to the drawing board to fine-tune strategies, the Ministry of Sports is currently overseeing the activities of the federation. It is now clear that the crisis in the NBBF is far from over.

The endless crises in the above mentioned sports federations are not peculiar to them. The only difference is the intensity and severity. For instance, the Badminton Federation of Nigeria (BFN) is presently engulfed in a leadership crisis. Some of the aggrieved members have dragged the immediate past president of the sports federation to a Federal High Court in Abuja. The court has since ordered that Chief Francis Orbih and his recently elected executive committee members should stop parading themselves as board members of the Badminton Federation of Nigeria.

Sadly, most of these crises, which have enveloped the sports federations, are borne out of selfish interests. Unfortunately, such avoidable crises have continued to stifle the growth of sports in Nigeria