In recent times, the North West region of Nigerian has come under terror attacks, leaving residents displaced and impoverished. Daily Trust on Sunday tells the… 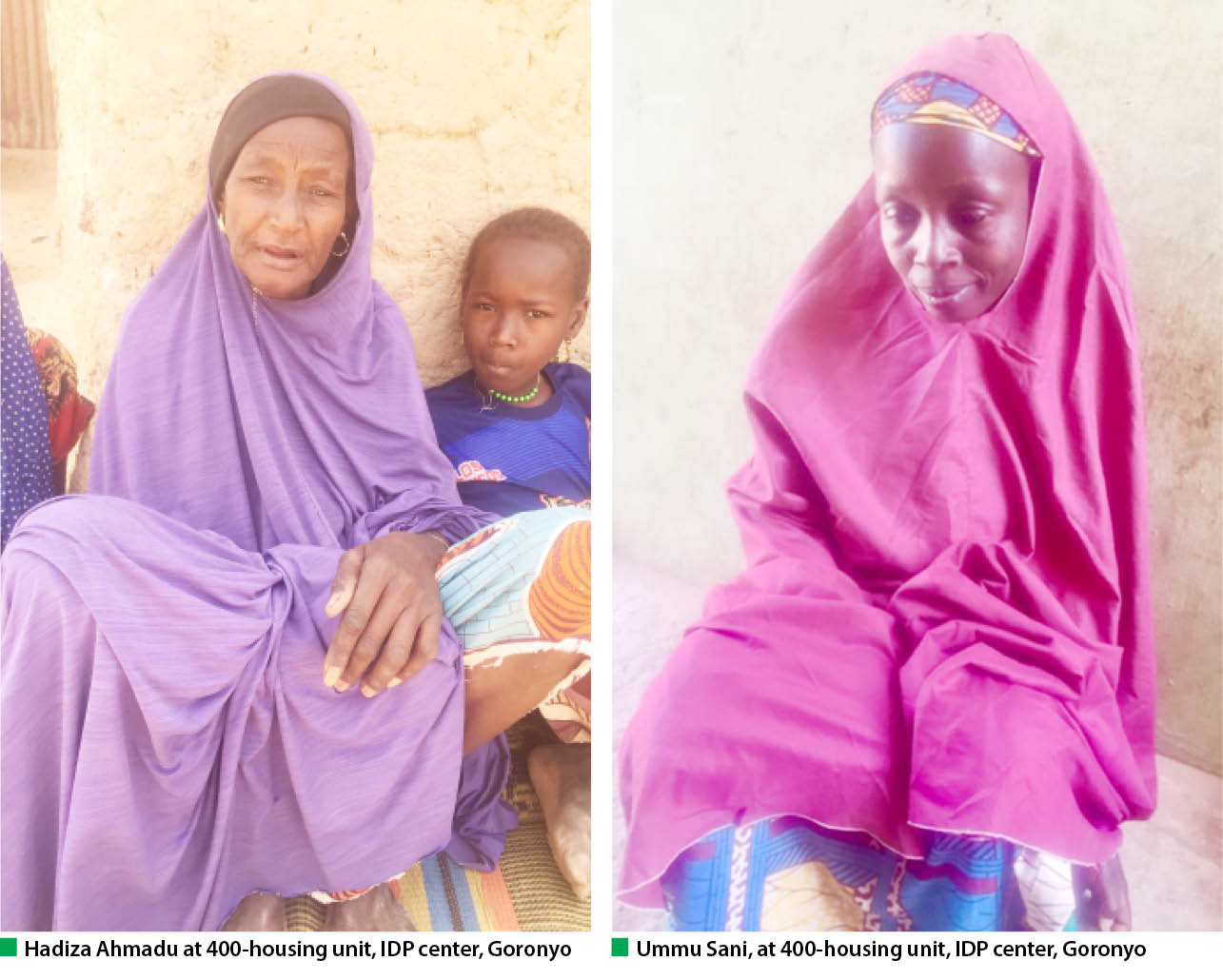 In recent times, the North West region of Nigerian has come under terror attacks, leaving residents displaced and impoverished. Daily Trust on Sunday tells the stories of widows who have lost their husbands to these attacks and how they fend for themselves amidst the rising insecurity.

Hadiza Ahmadu, 43, crouches in a rooted mat at a displaced persons’ camp named ‘400-housing units’, in Goronyo Local Government Area. She glares helplessly at the sky, shaking her head  before she could re-enact how her husband was killed in his village in Sokoto, North West Nigeria, by a group of terrorists, known locally as bandits.

The horrific scene she witnessed at the time of the attack sticks in her memory. It happened when the terror group came into their town after her husband arrived from night prayer, sought to eat and sleep. But was killed.

“They came into our village Danjibo in Goronyo Local Government at about 8pm on that day and entered our house, picked out my husband amidst my children, and shot him. He just came back from prayer and I was expecting him to eat and sleep,” she said.

Sokoto State has been continually affected by terror group attacks, particularly in places like Goronyo Local Government Area, which is 62kms from the state’s capital.

The attacks had led to huge loss of lives and property. Thousands of people, including the women that survived the attacks, were displaced to an IDP camp  provided by the state government.

The conflict has become a long-running struggle between the government of the country and numerous gangs and ethnic militias, which worsen the insecurity. According to Armed Conflict Location & Event Data Project (ACLED), the bandits killed nearly 2,600 people in 2021, an increase of over 250 percent from 2020.

After losing husbands, we pilfer firewood for living

Hadiza’s husband was killed by a terror group last year and since then, she’s been facing hardship with seven children. She recalled how things were fine when her late husband’s farming business provided over N40,000 monthly to cater for the family.

“We were living fine at Danjibo village, and my husband made about N40,000 to cater for me and my seven children. But now, I and my children have been suffering here since bandits killed my husband and destroyed our village,” Hadiza told Daily Trust on Sunday.

After fleeing, with no means to feed seven children, she and two displaced widows decided to depart the IDP camp to a nearby woodland – stealing firewood from the lumberjacks and selling them to earn money to buy food. “We make between N200 and N500 daily, yet it’s not enough to buy food,” she said.

“The continuous killing of men has resulted in lots of widows around as well as fatherless children. Additionally, we’ve seen large abductions of women by bandits who use them as sex slaves. So, there have been reported incidents of high cases of HIV infections and unwanted pregnancies, especially in the North West region. And today, we currently have over 500,000 women displaced across the region,” said Olajumoke Ayandele, a Postdoctoral Research Fellow at New York University Centre for the Study of Africa and the African Diaspora (CSAAD).

Olajumoke told Daily Trust on Sunday that the banditry attacks have social economic effects because market places were attacked, which affected most of the women feeding their families.

“We have seen the government respond with regards to shutting down the market places, and this has affected the livelihoods of a lot of them who are market women, and who take care of their families based on this income. That has been shot down in trying to address and solve the banditry attacks,” said Olajumoke.

Ummu Sani’s loss is heartbreaking. She isn’t mourning her husband alone but can’t halt breathing without seeing her kidnapped child again. The time was 10.50pm on a Thursday in July. Three strange men with black veil entered Danjibo village and everywhere was scattered. Ummu couldn’t run because of her child.

She is worried; however, two masked men entered her compound. They pointed guns at them but Ummu Sani, 45, knelt, pleaded but the men refused to listen.

“When they started killing people, I kept my children while waiting for my husband to come back. But I began to worry when I noticed that one of my children was missing.” They killed her husband and took away her child.

Dr Okhidievbie Oamien Roy, a military veteran and National Secretary For Retired Nigerian Armed Forces, said: “There are challenges about how we treat women, children and about the value we place in lives. So, before banditry, suicide bombing was predominant and women, young girls, children were used as the victims. Many of them are being intimidated because their husbands are dead. In areas like Sokoto, men marry more than one wife. So, you can imagine killing five or six men who have like three wives each. You can see the number of widows they are creating. And in those areas, too, when people want to get married, due to religion and culture, they marry young girls. It’s difficult for widows to remarry because men are looking out for young ones.”

“Those widows may be facing trauma, mental health and lots.  So, the Nigerian government should really partner with any kind of organization that is interested in giving them money to go back to trade. You must check them for any kind of diseases, monitor their mental status, make sure they have appropriate mental status and those that don’t, must walk out medical processes, psychological processes, to try to bring them back to stability,” he added.

Ummu’s remaining three children grew up without any scars, but the terror attack which pushed them out of their village to the IDP camp has created unhealed wound to their lives.

After her husband was killed in their village, she said there’s nobody to take care of her and the children again. The money she raises from firewood isn’t sustainable; which is why the children move around the town looking for food.

“I can’t stop them from begging around for food because they need to eat. Sometimes, I buy cassava flakes in the morning, then have nothing to provide for them throughout that day again. Before my husband was killed, he was taking care of everything including foods, clothes. But now, there’s nobody except God,” she said.

“We experienced lots of attacks in Danjibo village. A lot of people were killed and properties lost. Before we all left the village to the IDP Camp, the bandits tried to kill me and my wives; they even demanded money and phones,” Danjibo village head, Aliyu Issa, 50, said.

Aliyu told Daily Trust on Sunday that during the last attack in his village, many people were killed. He was on a sickbed and couldn’t do anything.

“Doing the last attack, I couldn’t do anything because I was sick. After they kidnapped and killed some, they promised to come back later in the night. But people departed to save their lives,” he said.

“I plead that the government should come to our aid, especially those whose husbands were killed by bandits. We are suffering, and nothing is being done to help us.”

The state government has not been proactive in assisting the victims. When contacted, the Sokoto State Commissioner for Information, Bello Muhammad, told this reporter that he can’t give full details of everything. But that the state government has provided palliative items to the Goronyo casualties and it’s being handled by the commissioner for Careers and Security Matters, Col. Garba Moyi (retd).

However, Moyi did not respond to several calls on his phone and the questions sent to him through text message.