The 11th graduation ceremony of American University of Nigeria (AUN) for the classes of 2020 and 2021 in Yola, Adamawa State on Saturday came with… 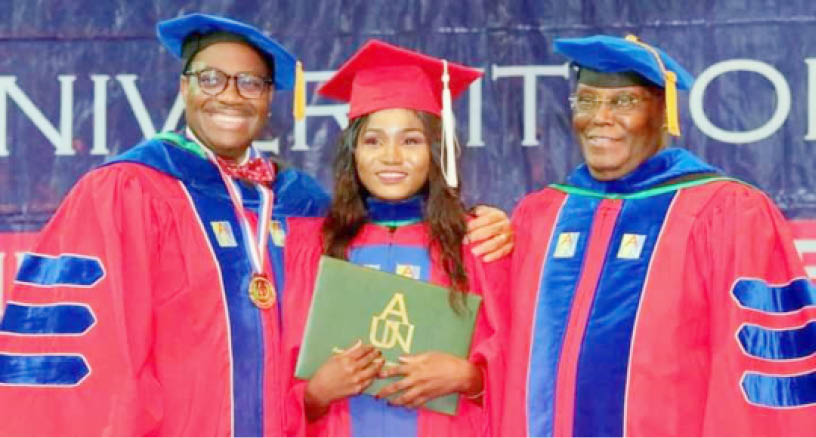 The 11th graduation ceremony of American University of Nigeria (AUN) for the classes of 2020 and 2021 in Yola, Adamawa State on Saturday came with much excitement for both graduands and parents who witnessed the milestones in the strides of wards.

April 14, 2014, left a deep scar on the collective conscience of Nigeria. On that fateful day, the world listened to the heartbreaking news of Boko Haram insurgents’ brazen abduction of 276 teenage schoolgirls from their dormitory in Chibok, Borno State.

A few of the girls succeeded in escaping as they were being led into the dreaded Sambisa Forest while dozens more were later freed after government-backed negotiations. Miss Mary Katambi was among those lucky ones that escaped on the night of their abduction.

On Saturday, July 10, 2021, Mary received a degree in Accounting from the America University of Nigeria, Yola. She was among a total of 475 students who bagged various graduate and post-graduate degrees in different fields in the school.

Seven years after the unfortunate abduction, Mary has grown into an adult with a university degree, leaving her traumatized past where it belongs.

The AUN founder and former Vice President of Nigeria, Atiku Abubakar, captioned a photo he took with her on Facebook thus: “Mary Katambi, I’m proud that seven years after your release from Boko Haram captivity, you’ve beaten the odds to graduate with a degree in accounting from the American University of Nigeria. The best years are still ahead of you.”

The post received many positive comments with many commending her doggedness to beat the odds in spite of her harrowing experience.

While receiving her degree, Mary said she would never forget her sad experience with Boko Haram but was grateful to AUN which has helped hone her determination to forge ahead in life.

“I don’t want to be looking for a job,” she said. “I want to run a business and create jobs for Nigerian youth.”

President of AUN, Margee Ensign said: “When I went to pick up the first group of Chibok girls about seven years ago, they were traumatised, scared, missing friends and family and not honestly prepared for a world-class education.”

She said it took some time “for us and them to make sure that we are giving them everything they need.”

Given the realities of where they came from, with no labs and English, it was remarkable how far they have gone.

“Mary on that stage getting a degree after what they lived through is a demonstration of strength, resilience and commitment,” Ensign noted. “She taught us all how to survive and thrive in the face of adversity. She and her colleagues deserve everything we can do for them so they can get the life they want. I am so proud of her,” she added.

Another highlight of the AUN graduation was that the female students took most of the top awards. Three females emerged as the valedictorians and two class speakers with only one male valedictorian.

According to the AUN Executive Director of Communications, Mr Daniel Okereke, this has been the trend for a long while now because the boys have shifted their attention to other extra-curricular activities that are non-academic.

He said most of the best graduating students are females and it is not surprising as they were putting more effort towards academic excellence.

For Fatima Rilwan, the Valedictorian for Class of 2020, a graduate of Computer Science, AUN was not her first-choice school as her plan was to do a semester and then move elsewhere to study Medicine and Surgery. Fatima changed her plan and stayed on as she was “impressed by the academic resources designed to support students, especially the writing and Mathematics centres.”

She said: “I also participated in the work-study programmes that enable students to gain practical working experience while studying.

Fatima, who bagged the First Class Honours, however, said her greatest feat aside from academic excellence was learning to give back to society through the Almajiri programme where they taught street children.

For the Class of 2021 valedictorian, Abdulrazaq Momoh, a graduate of Petroleum Chemistry, his impressions of the school included the constant power supply, 24/7 internet access and welcoming student life.

He said at AUN, you learn to work under pressure and still achieve your goals. “My AUN experience has been a positive one. The strict grading scale made me prioritise, focus, work hard and push myself further than I would ordinarily have done.”

The occasion also saw the President of African Development Bank Group, Dr Akinwumi A. Adesina, being conferred with a Doctor of Humane Letters.

Dr. Adesina, who was also the Commencement Speaker, was honoured for his exemplary service in the public sector, according to Ensign.

Ms Ensign said his record of service epitomises AUN’s motto: ‘Excellence, Integrity, and Service, for the collective good of the people of Nigeria, of Africa and of the world’. In many ways, he stands for what AUN stands for as Africa’s development university. We are honoured to honour a truly Nigerian and African hero.”

Dr. Adesina, in response, said he sees the award as an additional responsibility for him to do more for humanity. “I have devoted my life to it as it is important to change other people’s lives. It is a call to do more and I will and promise to be a great ambassador to the university,” he pledged.

To the graduating students, he said from what he saw at the event, having listened to them, they are smart, well trained and have eyes for the future not just to change Nigeria but to take on the world.

He said the future of Nigeria depends on what it does today with its dynamic youth population. “This demographic advantage must be turned into a first-rate and well-trained workforce, for Nigeria, for the region and for the world,” he said.

Former Vice President Atiku Abubakar said he has removed 45,000 families out of poverty in the region while collaborating more to empower women, adding: “When you want to fight poverty, empower women.”

He said through his Micro Finance Bank, he has been supporting women and that the recovery of loans from women is 90 per cent.

The former vice president, however, advised the AfDB president to review how they send money to the public sectors where it is stolen and to rather consider more of the private sector.