Electricity grid bounces back at 4,000MW after pipeline fire 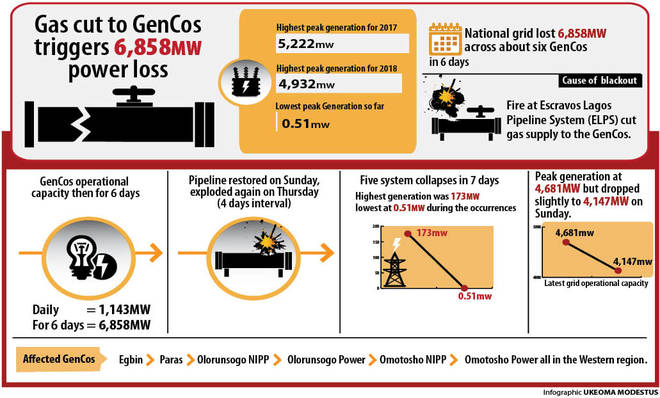 The peak generation as at Thursday morning stood at 4,372 which was a far improvement from the 3,600MW attained the previous week when the first pipeline fire occurred.

The latest 4,372MW peak generation was recorded earlier before NNPC announced the fresh explosion to the pipeline. However, the record of Friday generation shows that peak generation rose to 4,817MW with lowest generation at 3,776MW.

Except for the Olorunsogo NIPP which was still down around the Western region, the other five GenCos which were previously affected were operating last Friday but at low level, the record shows.

Ten days after the ELPS was burnt by bush fire and restored on Sunday, NNPC on Thursday reported that the same pipeline has been ruptured again by an explosion.

A statement by its spokesman, Ndu Ughamadu said the fresh incidence occurred along Egbokodo-Omadino, in Warri South Local Government Area of Delta State.

NNPC said, its Group Managing Director, Dr. Maikanti Baru, has directed that repair works should be executed immediately on the pipeline.

The GMD further directed that gas supply from other sources like Oben, Oredo, Sapele, Ughelli and Utorogu be stepped up to augment any shortfalls as repair works have commenced on the pipeline.

The Daily Trust reports that the two system collapses occurred at less than 24 hours interval. Independent data obtained from the Nigeria Electricity System Operator (NSO) shows that the peak generation of electricity was at 4,710MW on Tuesday being the first day of work in 2018, before the system collapsed after the frequency rose to a high 50.75 Hertz (Hz).

Officials at the transmission section of the power sector said the national electricity grid would have withstood the Odukpani GenCo trip off if generation along Western region were available.