No fewer than 1,525 people were killed in election-related violence across the country in the last five election cycles. As a report by the Tony… 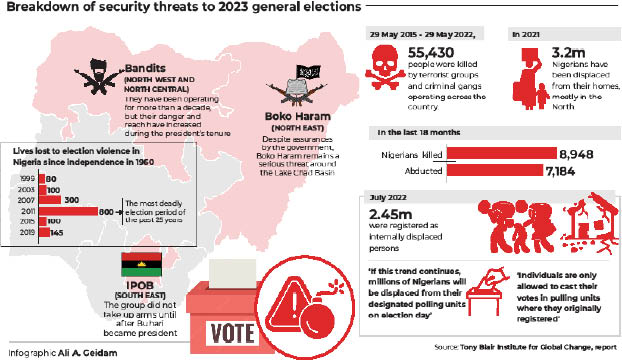 No fewer than 1,525 people were killed in election-related violence across the country in the last five election cycles. As a report by the Tony Blair Institute has revealed.

The institute has also has raised fears that the 2023 elections may equally be characterised by serious disruption from violence, particularly by terrorist bodies like Boko Haram, the Indigenous Peoples of Biafra (IPOB) and bandits.

On November 17, the Inspector General of Police, Usman Baba, raised the alarm that the country witnessed 52 violent cases in 50 days, warning that if not promptly halted the situation could affect the country’s electoral processes.

The report, exclusively obtained by Daily Trust, indicates that the highest number of lives lost during elections was in 2011, in which 800 people were killed. This was closely followed by the 2007 elections, which claimed 300 lives while those of 2019 and 2015 led to the killing of 145 and 100 people respectively.

According to the report, during the Buhari administration between 29 May 2015 and 29 May 2022-55,430 people were killed by terrorist groups and criminal gangs operating across the country.

In the 2003 elections, 100 lives were lost while in 1999 when the country conducted elections that ushered in the current democratic dispensation, a total of 80 people were killed.

Findings reveal that the bloodiest election period followed the outcome of the 2011 election, which favoured the then-incumbent president, Goodluck Jonathan.

However, the declaration that the main opposition candidate, Buhari, had lost resulted in three days of rioting and communal unrest that left at least 800 people dead and 65,000 displaced.

Although there were no documented widespread riots or communal clashes in 2015 and 2019, the EU Election Observation Missions had assessed the 2019 election to be “Increasingly marred by violence and intimidation of voters and INEC officials, primarily by party supporters”.

The EU had equally reported that approximately 145 people were killed in election-related violence in 2019, higher than the estimated 100 killed during the 2015 general election.

In the 2019 election, the main candidates, Muhammadu Buhari and Atiku Abubakar, were both Fulani Muslims from the North, a dynamic that helped de-escalate tensions in the wake of the election. Similarly, in 2015, former President Jonathan’s concession of the election even before the final results were declared was believed to have helped avoid the violent scenes of 2011.

Although the two main contenders for president in the 2023 election, Tinubu and Atiku, are both Muslim, they do not share the same tribal and regional similarities as Buhari and Atiku. Furthermore, the upcoming presidential election has two additional serious candidates, Peter Obi, a Christian from the South East, and Rabi’u Kwankwaso, a Muslim from the North West, both of whose supporters are ardent and ideologically loyal.

Observers say unless concerted efforts are made to maintain peace and ensure politicians respect the outcome of the election, 2023 may see a post-election scenario similar to that of 2011.

In its latest report, a copy of which Daily Trust exclusively obtained, the Tony Blair Institute raised concerns that the 2023 elections are under threat of serious disruption from violence by Boko Haram, IPOB and bandits.

The report titled ‘Democracy Under Threat: Why the Security Risks to Nigeria’s 2023 Elections must not be Overlooked’, said, “While peaceful and credible elections have never been a foregone conclusion in Nigeria, there are additional threats next year, with the biggest among them the violent activities of several non-state armed groups who have publicly expressed a wish to scupper the country’s vulnerable democracy.”

Bulama Bukarti, a Senior Fellow in Tony Blair’s Extremism Policy Unit who authored the report said: “Boko Haram, which has attempted to disrupt past elections and has expanded its operations since the last cycle, remains a threat while others – the Indigenous People of Biafra (IPOB) and “bandit” gangs – have emerged with sophistication and lethality that should raise concerns.”

Speaking further on threats to security ahead of the 2023 polls, Bukarti said: “Muhammadu Buhari, the outgoing president, came to power in 2015 on three campaign promises: tackling insecurity, fighting corruption and growing the economy. In his first few months in office, he took major steps to contain and thwart Boko Haram, which had become one of the deadliest terrorist groups in the world.

“However, as security forces were dismantling and pushing Boko Haram back to the fringes of the Lake Chad region, two other serious threats were escalating. While the secessionist IPOB predates the Buhari administration, the group did not pick up arms until well after he became president. Similarly, criminal gangs or, as they are known locally, “bandits” have been operating for more than a decade, but their danger and reach have increased during the president’s tenure. Today, these acute security threats are turning Nigeria into a nation at war with itself, albeit without any formal declaration.”

A public affairs analyst, Comrade Achike Chude, said the major problem being envisaged ahead of the election is the issue of insecurity, noting that the government doesn’t appear well prepared to tackle the security challenge head-on.

He said, “We have been having elections in Nigeria from 1999 till date, each election had its risk and so there is always this expectation and at the same time the apprehension about how the election would turn out.

For off-cycle elections like governorship, the danger might not be as much because when it comes to the issue of security, the government is always able to deploy enough security. But when you now have a general election and you know you don’t have this number of security men, what are you going to do?

“So as we go into this election next February, we have a problem and the major problem is the issue of security.”

Jude who is the Deputy Chairman of the Joint Action Front (JAF), a civil society organisation, expressed shock over the attacks on INEC offices in Osun and Ogun states, saying the attacks were initially confined to the South-East.

He noted that the consistent attacks pose a danger to the election and pointed accusing fingers at politicians, adding, “If we are arresting the perpetrators of the attacks, we must also go after those who sent them.”