A team of operatives of the Department of State Services (DSS), officials of the Central Bank of Nigeria (CBN) and officers of the Nigeria Security… 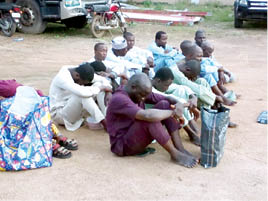 A team of operatives of the Department of State Services (DSS), officials of the Central Bank of Nigeria (CBN) and officers of the Nigeria Security and Civil Defence Corps (NSCDC) has clamped down on vendors of new naira notes in Kano.

During the operation around Central Hotel, Kano, 14 suspects, including a woman, were arrested for selling new naira notes.

The suspects, including an octogenarian, Alhaji Ubandi Hotoro (82), were paraded yesterday at the state command of NSCDC.

The state’s Commandant of NSCDC, Adamu Zakari, said the clampdown on the new naira notes vendors was hinged on Section 20 of the CBN Act, as it related to counterfeiting, hawking and selling naira notes, coins or any other note issued by the apex bank.

He said, “Investigation has commenced to ascertain the source of the new naira notes recovered from the suspects.”

He further said, “For the avoidance of doubt, the act of spraying naira notes at occasions, soiling and writing on them, squeezing them, as well as counterfeiting them were abuse of the naira punishable by law.”

City & Crime gathered that the suspects for example sell a bundle of N50 notes, which is N5,000, at N7,000, and that their customers are mostly party goers for the purpose of spraying the notes.