There was a mild drama on Wednesday as the senator representing Lagos West, Solomon Olamilekan Adeola, broke down in tears after he was presented with… 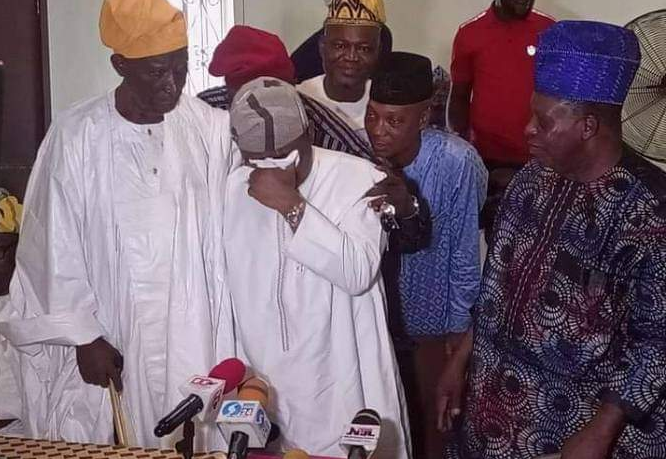 There was a mild drama on Wednesday as the senator representing Lagos West, Solomon Olamilekan Adeola, broke down in tears after he was presented with nomination form of the All Progressives Congress (APC) to contest for Ogun West senatorial ticket.

Adeola, popularly known as Yayi, had transferred his voting right and the All Progressives Congress (APC) membership from Lagos to Ogun State, as part of his ambition to run for Senate of Ogun West.

But on Wednesday some APC leaders from Yewa under the auspices of West to West for Dapo Abiodun (W2W4DA) presented senatorial expression of interest and nomination forms to the Lagos West Senator in his hometown in Ilaro.

Chief Mufutau Ajibola, a member of the Governor Elders Forum who presented the form to the Senator on behalf of the group noted that the forms were purchased with contribution from members of the group and sympathizers.

Ajibola said the fund was contributed by 71 people within 48 hours.

According to him, most of them were civil servants, professionals in the private sector, business men, community leaders and Ogun West indigenes in diaspora.

He said “A total of 71 people across the length and breadth of Ogun West, most of them here present cutting across public servants, professionals in the private sector, business men, community leaders and Ogun West indigenes in diaspora voluntarily donated to fund the procurement of the forms raising the needed amount under 48 hours between 3pm on Monday 18th and Wednesday 20th 2022.

“Just as we had young people in their 30s contributing, we also had elders in the 80s putting their hard-earned money into this project. This is an unprecedented feat signifying a new trajectory of collectivity and brotherhood in Ogun West Senatorial district.”

The Senator, who betrayed emotions while receiving the senatorial forms, said he was overwhelmed by the gesture.

Adeola said he became teary because of the obstacles he faced when he returned home and aspired to the party’s ticket.

He said he was called “unprintable names” by his opponents, who also sponsored written and verbal attacks to destabilise him.

“I thank God Almighty for a day like this, I am short of words. Today, I am more than happy and I am more than grateful to God for my people have taken this bold step and think that the best thing to do is to buy my nomination forms for the Senate of Ogun West . It is more than enough for me.”

“I vividly remember when I decided to return home , it was tough. I asked myself what I am about to do, is it the right thing or the wrong thing? Initially when I saw the heavy resistance that was given to me across the length and breadth of my land. I was afraid. They said I am not a Yewa man. All sorts of lies, all sorts of confusion everywhere.

“Even the then Governor sponsored my people against me , they told me that I am from Ekiti , that I am not from Yewa and they did that rigorously, campaigned with it, said all sorts of things about it. My people did not believe me  I had to go to another Senatorial district, that is why you hear that Yayi is popular in other senatorial districts then because they believed in me that I was from Yewa, but today my people have accepted the fact that I am from Yewa . I am now more popular in Yewa, Ogun West than any other state.

“You have shown to me today that there is no cause to regret my decision to return back home. I must say this, I am overwhelmed.”