As this year’s harvest period commences, sweet potatoes farmers, sellers and processors are smiling to the bank as the sale of the crop booms in… 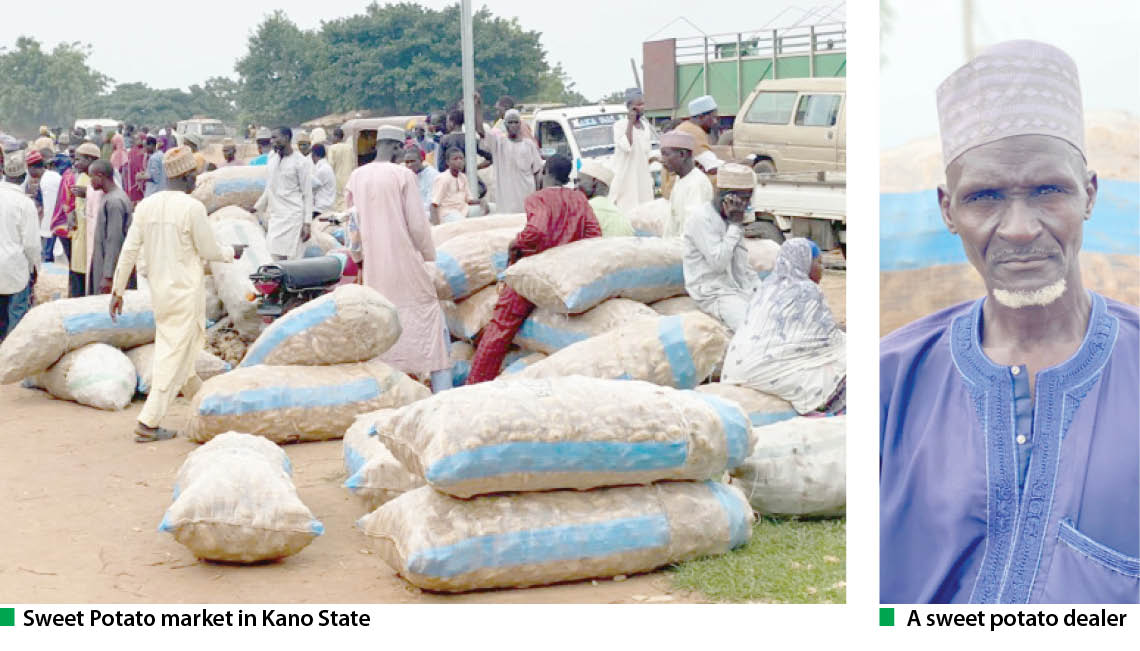 As this year’s harvest period commences, sweet potatoes farmers, sellers and processors are smiling to the bank as the sale of the crop booms in Rimingado Local Government Area of Kano State.

When our correspondent visited the market, hundreds of people, including women and children, were busy making purchases and loading the crop for their various places of business, especially to the cities where they process it into different forms.

Several people earn from different activities in the potato value chain, such as farmers, dealers, processors, porters, vehicles owners and even the consumers.

Most of the harvests come from villages within the local government like Gulu, Jili, Dawakin Gulu, with Gulu being the major source of sweet potatoes.

“Gulu is the hub of sweet potato farming in this region. We all rely on them. From there, sweet potato is supplied to this market and people buy from here for distribution to other places, including some states outside Kano,” one of the leaders of the market, Aminu Lawan, said.

Although he couldn’t give the exact number of people earning a living from the market, the leader said over 1000 people were estimated to come to the market for several engagements on a weekly basis.

Speaking to our correspondent, one of the dealers and a farmer of sweet potato, Haruna Musa, said he had been in the business since childhood and that he goes to the farms, buys directly from the farmers and brings to the market.

The dealer said he usually sells over a hundred sacks of sweet potato daily and during its peak time, the quantity doubles.

According to him, they take it to places like Babura, Daura, Danbatta, Mai Aduwa, Mashi and other markets from their Rimingado major market.

“During the peak period, I often sell about 200 sacks, sometimes up to 250. The least I buy or sell is 100 sacks a day and I take it to each of the markets I told you about.

“Potato farming and selling is what made me who I am today, even my first marriage and that of my children were from what I got from the business. It is the business that caters for me and my family, and I am grateful for that,” he said.

Another dealer, Amadu Abdu, said he was in the business from the time sweet potato was sold in kobos in basket to the present time they are selling in sacks.

He said the market, which is usually every Wednesday, has been existing for over 40 years and several people come to buy in sacks and trucks, with few who buy half sacks.

“We sell between 20 and 30 small trucks (kurkura) weekly, for now, because the season has just begun. But as harvesting progresses, we will sell about 100 trucks in a single day.”

He said people from Katsina and some parts of Jigawa State also patronize the sweet potatoes market.

For Aliyu Jibrin, who supplies sweet potato to cities, his top customers are women who fry it for commercial purposes and residents who buy to eat at home.

On the challenges they face in the business, one of the dealers said apart from the cost of farm input and transportation, they need a permanent marketplace.

“Of course, we have challenges, but our main problem for now is that we do not have a specific location for this business. We have been given notice to leave this place because it has been allocated to some people to build shops. If the authorities will allocate a place to us, we would not be moving from one place to another. So far, we have been in four places and this is the fifth place.