Did Lamido, his daughter and son contest PDP primaries?

Claim: A viral post has recently surfaced suggesting that the former governor of Jigawa State, Sule Lamido, his daughter and son won primarie to contested… 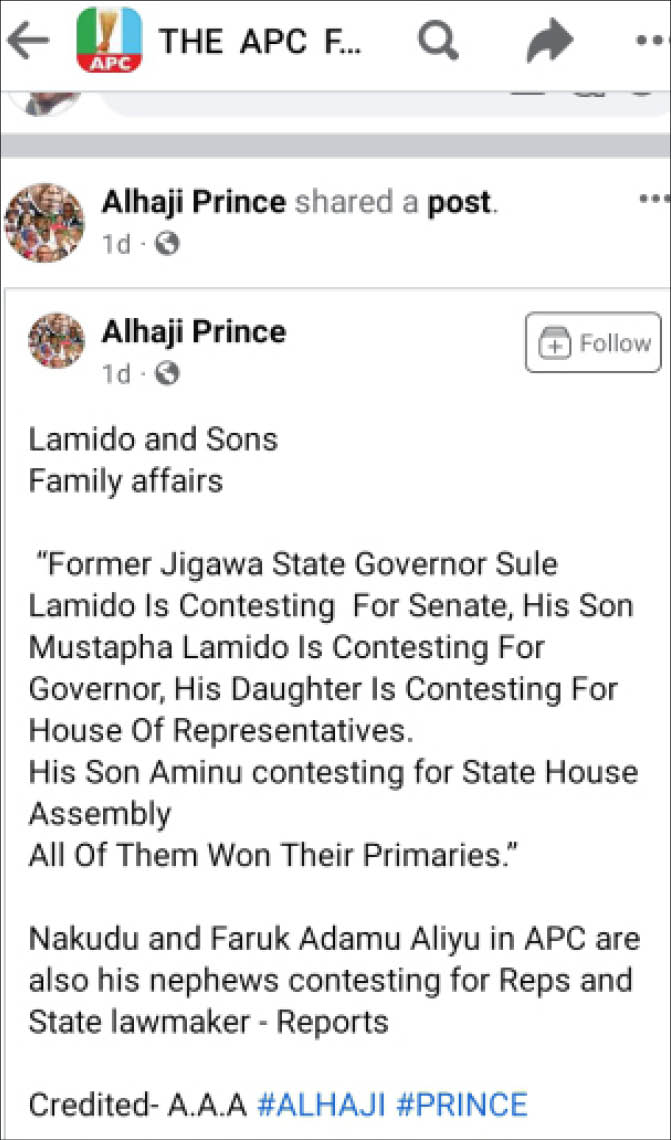 Did Lamido, his daughter and son contest PDP primaries?

Claim: A viral post has recently surfaced suggesting that the former governor of Jigawa State, Sule Lamido, his daughter and son won primarie to contested and won for Senate, governorship and House of Representatives position in Jigawa State.

Following the of primary elections that would determine whose names to appear on the ballot paper during the 2023, there has been widely spread claim that the family of a former governor of Jigawa has began scheming to turn the state into a family affair with him and two of his children winning their primaries under the platform of the People’s Democratic Party (PDP) a Facebook user with the moniker, Alhaji Prince posted that “ Lamido and Sons Family affairs. Former Jigawa State  Governor, Sule Lamido, is contesting For Senate, His son, Mustapha Lamido, is contesting For Governor, His daughter is contesting For House of Representatives. His Son Aminu contesting for State House Assembly. All of them won their primaries.”

He continued “Nakudu and Faruk Adamu Aliyu in APC are also his nephews contesting for Reps and State lawmaker.”

Another netizen posted that “Sule Lamido won for Senate, his son won for Governor and his daughter won for Rep. All under PDP in Jigawa state. If this is Tinubu, some people will visit UN headquarters to submit petition of threat to Democracy,” reads one of The post which has generated several reaction from Nigerians.

Similarly, on his facebook page, Engr. Hameed Olalekan while reacting to the post said, “And Yorubas want to kill Tinubu?”

A twitter user with the name, Bashir Iliya stated “They are Barwos”

While a Twitter user, Kemi Biodun, replied by saying “Greedy fellows and tomorrow they will be complaining about Tinubu”

Another Twitter user,  Chiedu Ani said “In the land of the blind, a one eyed man is a king, Greediness,”

The claim is coming at the background of children of serving and former governors coming out victorious in party primaries they contested to vie for elective positions come 2023.

In the same vein,  Okowa-Daramola, daughter of the Governor of Delta State, Ifeanyi Okowa won the race to contest for House of Representatives’ to represent Ika, North East ticket.

However, Orode Uduaghan daughter of the former Governor of Delta State, Emmanuel Uduadaugh lost her bid to represent Warri North in House of Representatives’ while in Ethiope West federal constituency, Erhiatake Ibori-Suenu, daughter of former Governor James Ibori of the same state, forced a re-rum having polling the same number of votes with her opponent all under the platform of PDP.

Checks by Daily Trust  has shown that the former governor did not contest for any election in Jigawa State likewise his daughter.

However, at the recently concluded primary elections of the People’s Democratic Party in Jigawa state, the governor’s son, Mustapha Lamido won the PDP’s Gubernatorial ticket.

On 25th, he was elected the governorship candidate of the opposition Peoples’ Democratic Party (PDP) in the state. Mustapha Lamido defeated his challenger, Sale Shehu, a former junior Minister for Works by 829 to zero votes. Mustapha expressed joy at the victory saying, “I most sincerely accept this nomination with humility, modesty and determination.”

He described the congress as historic stating that “as we move to the next stage of campaign and elections, I ask you to trust me, work with me, campaign with me and vote for me so that we can make the state great again. And I count on you to come out massively to vote for PDP.

“I urge all of us to avoid politics of division and disunity. The interest of the state is far and above any personal or sectional interest.

“To our traditional rulers and elders, I have great respect for them and will consult them regularly on issues that will assist in moving the state forward. I pledge to campaign peacefully, but vigorously, I therefore ask for your support and prayers,” he said.

The claim that former governor Sule Lamido, his daughter and son contested and won the PDP tickets is misleading as only his son clinched the PDP ticket.