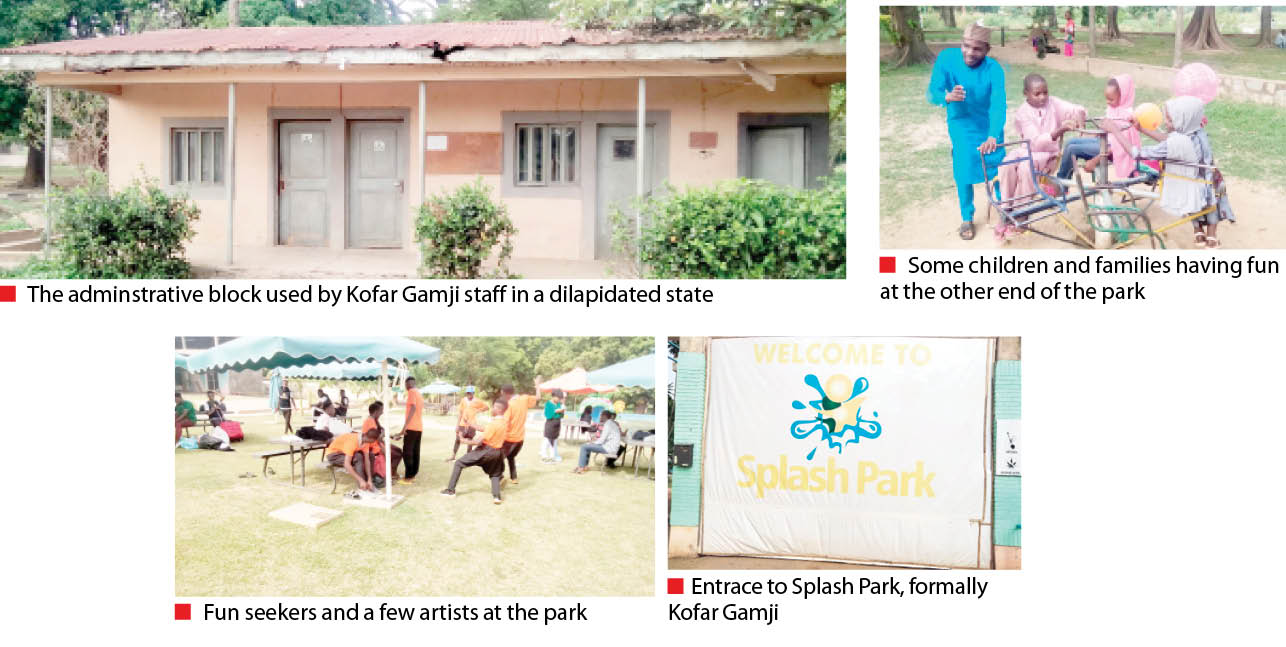 Fun seekers in Kaduna metropolis have continued to entertain concerns over the inability of managers of the former Kofar Gamji Park now Splash Park to fully transform the park many years after its take over. Daily Trust Saturday reports.

Before the concession, Kofar Gamji used to be a beehive of activities, especially during the weekend as the park provided some kind of recreation for families.

On the downside, in the past, the park became a meeting point for drug addicts and miscreants, forcing families to stop patronising it because it was capable of having bad influence on their wards. This, our correspondent gathered informed the decision of the new managers to hike the entrance fee from N100 to N600 in order to deter miscreants from gaining entrance.

Daily Trust Saturday reports that with the handing over of the park to a private company, fun seekers in the state had high expectations that a lot will change and upgraded in the park, but to their dismay, this has not happened.

Our correspondent recalls that before the concession, the park was equipped with amusement rides, including a carousel, swing and a lodge, but the park presently has only a water slide and a water fountain even though the management said its upgrade work was stalled due to flooding.

“What you are seeing now, the water slide and water fountain are all part of Phase 1. Phase 2 is expected to have a lazy river ride, but because of the volume of water that flows into the park during the rainy season and causes flood, we have not been able to start that phase,” the manager of the park, Suleiman Adamu, said.

Our correspondent, who visited the park twice, observed that though there were a few families and children at the park, the number was not encouraging, especially when compared to the Kofar Gamji days.

There is also no power supply, and manual receipts instead of electronic ones are given to fun seekers asking them to come back when power is restored. Also, the fountains and slides could not be used due to lack of power and the children were left with no option but to swim in the shallow pools.

Children playing under the watchful eyes of their parents in boat rides, pools were seen wearing life jackets as a precaution.

The park’s zoo, which used to have animals like lion, ostrich and a cheetah, is under lock and the crocodile pit is also empty. The animals were said to have been moved to another location by the state government.

Daily Trust Saturday  also observed that other side attractions introduced in the park include horse riding with a horse named Ameera, a food court, football field and 5-dimensional visual games.

The stage where budding artistes converge to promote their songs and draw large crowds to the park is now empty, though plans are underway to draw in new artistes to preform.

Apart from the safety barrier on the Lord Lugard Foot Bridge, the bridge looks dilapidated, with overgrown grasses just like many old structures at the park. There is also no fence or written instructions to warn visitors against unauthorised access to the river.

The former administrative block and other buildings, including the changing rooms and toilets that are being used, are all in a dilapidated state.

Our corresponden observed that erosion caused by the volume of water which floods the park due to lack of proper drainage on the main road is also a major factor and has affected the expanded lawn that could have provided a conducive environment for picnics and relaxation.

A mother, who was at the park with her husband and four children, said she did not know if she will continue coming to the park.

According to Mrs Elizabeth Okafor, “As you can see, I am at the park with my husband and our four children; we just decided to leave our house and come out for a picnic. The experience has not been very pleasant because the power went off over an hour ago and the management said they did not realise the diesel had finished.

“It took them over two hours to get diesel and power the water slides and fountains which is why the children are here. I think the management needs to put in more effort because after paying a gate fee of N600 each and paying N2,000 and N1,500 for rides, I think I should get my money’s worth.”

She, however, commended the management for being very security and safety conscious in the pools and park environment, adding “I stopped coming to the park after I witnessed a fight between rival gangs over a girl when it was still Kofar Gamji.”

Some parents, who spoke to our correspondent, expressed mixed feelings on the new state of the park. While some were happy about the change, others felt the former park was better.

Nafisa Sulieman, who brought her three children to the park, said they had fun and enjoyed the family time at the park.

“It was really fun because in Kaduna, there are very limited places you can go with the kids, it’s either an ice cream joint or a restaurant so this was very refreshing for me and my kids. Another thing I would like to add is that the environment is very safe and serene, you can be working while your kids are enjoying themselves.”

She, however, appealed to the management to build more structures and upgrade the place so that families can spend more time in the park which will also mean more money for the government.

For Haruna Mohammed who just got married a few months ago, he said, “I am here to just have a quiet time with my new bride. We came to the park not for the water rides but for the nice lawn, trees and serene environment. We have our food and drinks as well as music; it’s all about spending time together quietly which is something you cannot get in other public places.”

Although Maimuna Idris, a mother of five, expressed satisfaction with the new look of the park, she lamented that the fees demanded for access to the facilities were on the high side; forcing her to spend more than she budgeted for.

“We paid gate fees of N600 to come in; that is alright, but they should have allowed us to enjoy the facilities at low prices. The prices of the pools are expensive; you have to pay different amounts to access each pool, at the end, I spend huge amount of money.”

On future plans for the park, the manager, Suleiman Adamu, said a lazy river ride is under way, adding that flood is delaying the project.

“During the rainy season, there is a flood that comes to the park from a drainage that extends from the main road. The water floods the whole place and sometimes, we don’t operate the facility for a whole week.”

He said they have written to relevant state government agencies and are waiting for their response.

He noted that the journey so far has been good since they took over in November 2018 through a partnership with the state government.

On the hike in entrance fee, he said, “The purpose for inflating the fees was to ensure adequate security for the fun seekers. We intentionally decided to increase the entrance fee to N600 to wade off touts who used to come to the park. Since the fee was increased, the park has not encountered any form of thuggery or security breach,” he said.

On the zoo and plans for new artistes to perform at the park, he said the state government decided to move the animals away from the park and there is a DJ who performs at the park on Sundays and festive seasons.

On patronage, he said they have no issues. “Our number one priority is to make sure that every customer that enters the park is safe, so even if only one person is able to come, we are okay with that.”