Despite the extension of landing permits granted to Nigeria by the Kingdom of Saudi Arabia, there is still uncertainty over the fate of more than… 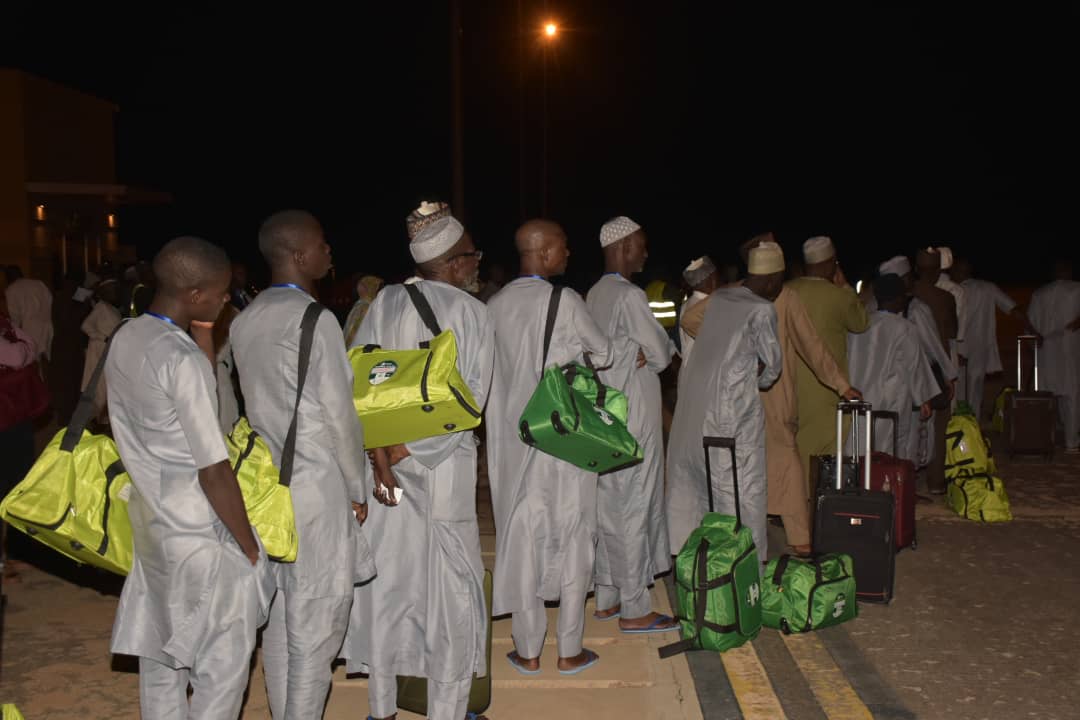 The last batch of Bauchi state pilgrims boarding an aircraft to Saudi Arabia.

Despite the extension of landing permits granted to Nigeria by the Kingdom of Saudi Arabia, there is still uncertainty over the fate of more than 8,000 intending pilgrims as they await their airlift just 24 hours to the closure of airports in Saudi Arabia.

Daily Trust reports that the National Hajj Commission of Nigeria (NAHCON) announced cheering news on Monday that Saudi had granted a 48-hour extension to Nigeria to airlift all its intending pilgrims.

With the extension, the landing permit for flights conveying intending pilgrims, which was to close Monday would now close on Wednesday.

While this came as a relief to many intending pilgrims stranded across the country, there is still apprehension among some of the pilgrims as the deadline inches nearer.

Checks by our correspondent showed that as of Monday morning, 27,359 pilgrims have been airlifted out of the 33,971 state pilgrims while about 5,641 intending pilgrims are yet to be airlifted.

The funds would have enabled them to pay for visa processing, accommodation and feeding, among others.

While NAHCON said it has transferred the money to the operators’ accounts in Saudi Arabia, a number of the operators, about 51 of them, could not confirm the payment. Each tour operator had 50 pilgrims each allocated to them by NAHCON.

Daily Trust gathered that some of the operators had to source dollars from the black market to fund their accounts in Saudi Arabia in order to process their pilgrims.

But one of the affected tour operators who spoke with our correspondent on the condition of anonymity said he had already notified his pilgrims that they would miss the Hajj this year.

“I have already informed my intending pilgrims that I won’t be going for Hajj this year. This matter is beyond us. Up till now, there is no solution and about 2,800 would not be able to perform Hajj. In addition, we are running into serious debt with the flight bookings we have done.”

National President of the Association of Hajj and Umrah Operators of Nigeria (AHUON), Alhaji Nasidi Yahaya said, “We have not resolved a lot of issues as I am talking to you. Of course, a lot of our pilgrims will miss the exercise. Although they said they have arranged for rescue flights. We are waiting to see it happen.

“But all the same, it has never been the usual thing. Some tour operators tried to source money from the parallel market, which is too bad to put into their banks so that they would not fail people. This is terrible; we have never seen a thing like this before.”

But as the tour operators are confronted with the reality of their pilgrims missing the hajj exercise, thousands of state pilgrims are in limbo over the date of their departure to the holy land despite the extension.

NAHCON through its Assistant Director, Public Affairs, Fatima Sanda Usara, disclosed in a statement that the General Authority for Civil Aviation (GACA) approved the extension of landing permit for Nigerian hajj carriers, saying the extension started from July 6 for one of the airlines and 4th and 5th have been approved for others.

NAHCON sought the extension to enable it to transport its remaining pilgrims into the Kingdom for the 2022 hajj.

Usara disclosed that of the 43,008 pilgrims expected to arrive in Saudi Arabia from Nigeria, 27,359, inclusive of 527 staff as well as committees and board members, under the government quota have been conveyed.

Similarly, over 5,000 out of the 8,097 tour operators’ pilgrims with valid visas were moved through scheduled flights and other arrangements.

She said the extension was necessitated by excessive flight cancellations and flight delays, saying, “Data has shown that, from 10th to 13th of June, nine flights were cancelled due to reasons ranging from inability to secure BTA, insufficient funds for visas, unavailable PCR test results, etc.

“In total, 13 flights were cancelled with another 57 delayed take-offs. Seven of which are in two digits, with the highest being 24 hours’ delay, followed by 23 hours delay, 22 hours and lowest in this category are twice 10-hour delays. Only 13 flights left on schedule out of the 65 outbound flights so far witnessed from the country.”

NAHCON, however, assured that despite the “difficult situation”, no pilgrim would be left behind “as long as that individual has valid travel documents.”

“To buttress this fact, frequency of outbound flights improved to seven take-offs yesterday and at full capacity too. Thankfully, one of the carriers, FlyNas, with its four aircraft, will fly four times daily thereby moving 1,732 each day,” the airline added.

NAHCON, therefore, appealed to pilgrims “To be calm and to remain prepared for onward conveyance for the 2022 Hajj.”

While regretting the tension and stress intending pilgrims might have experienced during this outbound journey to the holy land, the statement quoted the NAHCON’s Chairman, Alhaji Zikrullah Kunle Hassan as commending Nigerian pilgrim’s resilience while praying that they all attain Hajj Mabrur whose reward is Jannat ul Firdaus.

Despite the assurance, there is still uncertainty in the air as about 8,000 pilgrims are yet to be airlifted 24 hours before the deadline.

For instance, in Kano, which has the highest number of pilgrims, there are at least 1,254 intending pilgrims that are yet to be airlifted.

So far, 975 intending pilgrims have departed the state for the holy land with the third flight leaving the Aminu Kano International Airport Sunday night.

The state was initially given 2,229 slots before the National Hajj Commission of Nigeria added 58 slots for Jaiz Hajj Scheme beneficiaries.

Daily Trust however gathered from the Kano State Pilgrims Welfare Board that pilgrims from 14 out of 44 LGAs had been airlifted with the state hoping to airlift the remaining 1254 before Tuesday.

The Executive Secretary of Kano State Pilgrims Welfare Board, Alhaji Mohammad Abba Danbatta attributed the slow pace of the airlift of Kano pilgrims to Saudi Arabia to the incapability of the air carrier, Azman Air, assigned by NAHCON to airlift the pilgrims.

Danbatta, who stated this while addressing journalists in Kano on Monday, said before the commencement of the airlift of pilgrims to Saudi Arabia, the board had formally written to NAHCON seeking its approval to allow Max Air to airlift its pilgrims as against Azman Air that was allocated to the state.

He said the board made the request because Max Air had performed the same exercise for many years without any hindrance.

But despite its request, NAHCON assigned Azman Air, which is relatively new in the business, the task of airlifting its over 2000 intending pilgrims.

“Yesterday (Sunday), Azman directed us to call our pilgrims for airlift to Saudi Arabia, we summoned over 400 pilgrims for screening at the camp, and the pilgrims were left stranded for over 24 hours,” Dambatta lamented, adding that after NAHCON was intimated of the latest development, it agreed that Azman Air cannot fulfill the assignment and resolved to hire an air carrier company from Saudi Arabia named FlyNAS, with two aircraft that can contain over 400 pilgrims each at a time.

On his part, the Public Relations Officer of Azman Air, Nuruddeen Mohammad said they were directed by NAHCON to concentrate on the airlift of Kaduna pilgrims, saying they will collaborate with another airline to airlift all Kano pilgrims within the stipulated time.

A hajj stakeholder who spoke to our correspondent on the condition of anonymity stated that there is no magic that can be performed to meet up with the airlift of all the remaining pilgrims.

“Even despite the extension, there is no way we can meet up the target even if we are airlifting 1,000 every day. We just have to accept the reality that some of our pilgrims would miss this year’s exercise.

“They granted us an extension but I foresee that with that extension, we should be seeing some flight updates but nothing is happening. By tomorrow (today), the extension will remain 24 hours. This is a reality we have to face, we just pray that those who would not be able to make it will just see it as an act of God and pray against next year.”

Another hajj stakeholder, Abdulfattah Abdussalam, said NAHCON should have activated extra flights to fly pilgrims out before it is too late.

When contacted, the NAHCON’s spokesperson in a response to our correspondent’s enquiry if all the pilgrims would be airlifted before July 6, simply said, “In Sha Allah” (God’s willing).

Also, Executive Director of Max Air, Barr. Shehu Wadda assured that the airline would do its best to airlift all the pilgrims assigned to it.

He said, “By the grace of Almighty Allah, we will do our best. It is the way we started, they (pilgrims) were not coming out and there were a lot of logistics issues. This year’s Hajj is a special one but we are putting our efforts into it.”