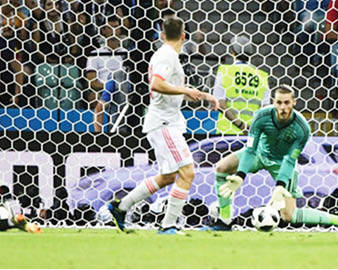 Another costly error from David de Gea dealt Manchester United’s chances of Champions League football a potentially fatal blow as Chelsea consolidated their place in the Premier League top four with a 1-1 draw at Old Trafford.

A point halts a run of seven defeats in nine games for United, but does little for Ole Gunnar Solskjaer’s men’s chances of overhauling Chelsea, who remain three points ahead of the Red Devils and with a superior goal difference.

Arsenal’s defeat by Leicester earlier on Sunday means Maurizio Sarri’s men move two points ahead of the Gunners with two games of the campaign to go.

Solskjaer made five changes from the side beaten comfortably by Manchester City in midweek.

However, it was the one the Norwegian did not make, and insisted he would not countenance, in dropping De Gea that came back to haunt him after a positive start from the hosts.

Romelu Lukaku was one of those recalled to the starting line-up and should have rewarded his manager inside five minutes with the opener as he got in behind the Chelsea defence, but allowed Kepa Arrizabalaga to narrow the angle and block.

Lukaku quickly made amends as United scored from open play for the first time in two minutes short of nine hours.

The Belgian’s lofted pass picked out the run of Luke Shaw from left-back and his cut-back found Mata to roll into an unguarded net against his former side.

Eric Bailly then headed inches wide from a corner as Chelsea seemed destined to complete a clean sweep of five defeats away to top six opposition this season.

However, they were given a lifeline two minutes before halftime as De Gea’s miserable run continued.