Trailer drivers on Friday blocked the Abuja–Lokoja dual carriageway in protest against the closure of Obajana Cement Plant by the Kogi State Government. The blockage… 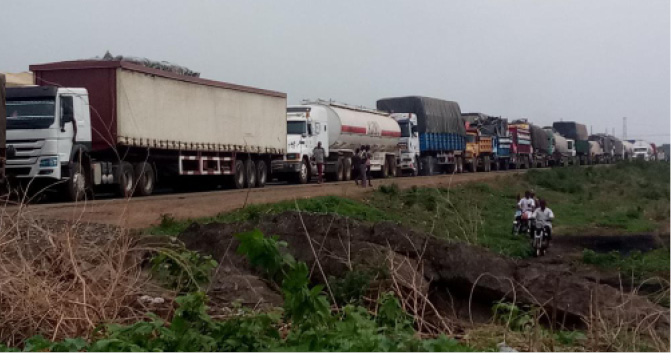 Trailer drivers on Friday blocked the Abuja–Lokoja dual carriageway in protest against the closure of Obajana Cement Plant by the Kogi State Government.

The blockage at Koton-Karfe end of the highway that was bedeviled with flood water challenge for almost a week has compounded the woes of motorists playing the route.

Our reporter observed on Friday that every vehicular movement on the highway was brought to an abrupt end as a result of the action of the protesters.

Consequently, long queues of vehicles were built up, while social and economic activities in the area were halted.

A motorist, Mallam Usman Odaudu, who cut short his journey and returned back to Lokoja on Friday afternoon, said the situation had gone beyond control for now.

“We were contending with Ravaging flooding that has taken over the bridge at kotonkarfei end of this highway over a week now, with it attendant consequences.

“This afternoon to our surprise , trailer drivers , claiming to be protesting over closure of Dangote cement factory took their vehicles and blocked the two main lines on the highway, making whatever efforts being made for motorists to cross over the flooded area to nothing,” an angry motorist from Lokoja lamented.

According to him, the protesting drivers have vowed not to suspend their protest until the Kogi State government reopens the cement plant that had been shut for three days.