The Federal Operations Unit, Zone A, of the Nigeria Customs Service (NCS), on Wednesday, said it intercepted 3,116 cutlasses being smuggled into Nigeria by criminal… 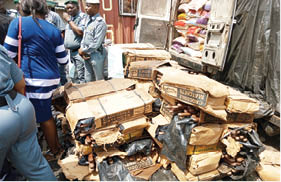 The Federal Operations Unit, Zone A, of the Nigeria Customs Service (NCS), on Wednesday, said it intercepted 3,116 cutlasses being smuggled into Nigeria by criminal gangs ahead of the 2023 electioneering campaigns.

It said that the cutlasses which were smuggled in from Ghana were intercepted in a hot in a border town in Ogun State, and that 11 suspects were arrested, with different seizures made within the same period.

Addressing newsmen on the activities of the unit in the month of October, the acting Controller, Kehinde Ejibunu, said officers, having understood the unrepentant nature of some economic saboteurs’ increased desperation to smuggle and their quest to acquire wealth ahead of the festive period, blocked all areas used by smugglers to bring in contraband.

He said that on October 22, 2022, based on credible intelligence, operatives of the unit, while on patrol stumbled into a thatched house deep inside a forest.

He explained that, “When they entered the hut they discovered cartons of brand new machetes without any End User Certificate (EUC). The team evaluated the items and brought them to the unit’s headquarters in Ikeja. When they were counted, it was discovered to be 3,116 pieces of cutlasses.

“We have discovered in the past that during electioneering campaigns, urchins use brand new machetes to inflict terror on opposition aspirants and their members.

“Officers also intercepted 53,759 litres of petrol, 96kg of Indian and 700 rolls of cigarettes.

“Eleven suspects have been arrested for their involvement in the various seizures.”