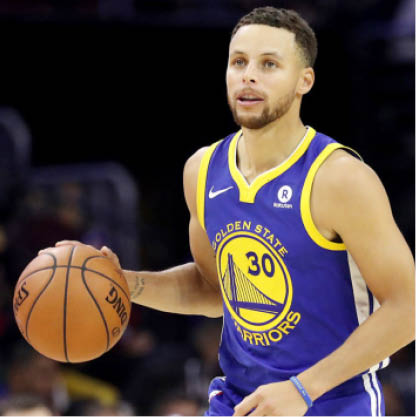 Stephen Curry produced a dazzling 43-point display as the Golden State Warriors battled past the Boston Celtics 107-97 to level the NBA Finals series at 2-2 on Friday.

With the Warriors needing a victory at Boston’s TD Garden to avoid going down 3-1 in the best-of-seven series, Curry delivered one of the best performances of his glittering career to reignite Golden State’s hopes of a seventh championship.

Curry had entered game four with concerns swirling over his fitness after suffering a knock to his foot in the Warriors’ game three defeat on Wednesday.

But the 34-year-old two-time NBA Most Valuable Player emphatically laid to rest any doubts about his fitness as he single-handedly hauled Golden State back into the finals with game five back in San Francisco on Monday.

Curry finished with 43 points, 10 rebounds and four assists on a night when Golden State again struggled to find their offensive rhythm for long periods against a powerful Boston line-up.

Klay Thompson added 18 points for the Warriors while Andrew Wiggins produced 17 points and 16 rebounds in a crucial contribution. Jordan Poole added 14 from the bench.

“A lot of pride in our group, a lot of talk over the last 48 hours about how we can get back into this series,” said Curry.

“It’s crazy because I still feel we can play a little bit better. But to win on the road and get the home-court advantage back, is big for this group.

“We’ve been here six times, we’ve got a lot of experience of staying confident and composed.

“I’m just thankful for everyone on our team because we brought a lot of toughness and physicality tonight.

“We knew how big this game was. For us to come out and do what we did and go home. That five-and-a-half-hour flight home got a little better after tonight.”

Boston had led by four points at 94-90 with just under five minutes remaining before a Wiggins layup and a Thompson three-pointer put Golden State up 95-94.

Curry then extended the lead with a layup to make it 97-94 before driving in the dagger with a three-pointer to leave the Warriors 100-94 ahead.

Al Horford cut the deficit for Boston with a corner three, but Kevon Looney’s layup restored the Warriors’ five-point cushion.

Curry then closed out the game, cleverly drawing fouls from Boston to nail five points from the free-throw line.