Goalkeeper Dominik Livakovic was the hero for Croatia, saving three penalties in the shootout as his side beat Japan to reach the World Cup quarterfinals… 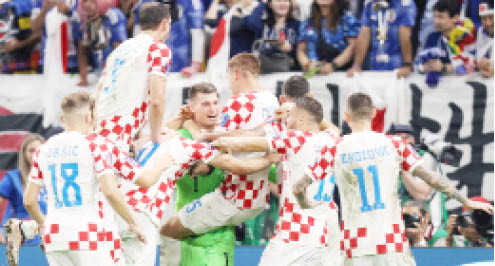 Goalkeeper Dominik Livakovic was the hero for Croatia, saving three penalties in the shootout as his side beat Japan to reach the World Cup quarterfinals on Monday while Brazil enjoyed a thumping win over South Korea.

Japan had already beaten European heavyweights Germany and Spain in Qatar and they looked on track to take down 2018 runners-up Croatia when Daizen Maeda put them ahead just before halftime.

But Ivan Perisic brought Croatia level in the 55th minute with an impressive header from Dejan Lovren’s cross and a hard-fought match became the first of this World Cup to go into extra-time.

When neither side could break the deadlock, the tie also produced the first penalty shootout of Qatar 2022.

Livakovic, the hero of the hour, said: “I don’t think they were difficult penalties to save, they weren’t perfect penalties, and thank God for that.”

Meanwhile, World Cup favourites Brazil, produced a performance to delight fans and terrify potential opponents as they ripped through South Korea with four first-half goals to secure a hugely impressive 4-1 victory in their last 16 clash.

They were ahead after seven minutes when Raphinha’s low cross reached Vinicius Jr and he expertly lifted the ball above the charging goalkeeper and three defenders.

Five minutes later it was 2-0 with a Neymar penalty and Richarlison added a brilliant third after a spell of juggling then a razor combination with Marquinhos and Thiago Silva that had Brazil’s delirious fans dancing and neutrals everywhere purring.

Lucas Paqueta volleyed in the fourth after 36 minutes and the five-time champions played the second half as an exhibition, denied more goals only by impressive Korean goalkeeper Kim Seung-gyu, as they turned their attention to Friday’s quarterfinal meeting with Croatia.

Korea worked tirelessly and bravely to try to limit the damage and were rewarded for their own attacking efforts when Paik Seung-ho smashed in a brilliant long-range shot beyond Alisson 13 minutes from time.