The Kano State Consumer Protection Commission (CPC) has confiscated carrion at an abattoir at Unguwa Uku, Yan Awaki Market in Tarauni LGA.  In a statement,… 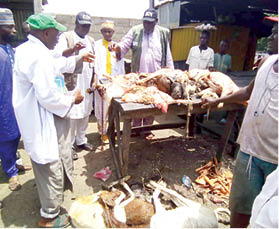 In a statement, the CPC’s spokesman, Musbahu Yakasai, said they received complaints from concerned citizens that the meat of dead animals were brought to the abattoir.

The statement revealed that a Special Assistant (SA) Governor Abdullahi Ganduje, Salisu Muhammad, on behalf of the acting Managing Director of CPC, Baffa Babba Danagundi, made the confiscation.

The statement reads in part: “We received complaints from some patriotic individuals that some dead animals were slaughtered somewhere and brought into the slaughterhouse for meat production.

“The commission acted accordingly and successfully withdrew the dead meat from the place when a veterinary doctor tested and confirmed most of them were dead before they were brought in.”

He added that the commission would investigate and punish the defaulters according to the law.