Consumption of spices among Nigerians is becoming popular and consistent day-by-day. It has become one of the major ingredients used in cooking and making tea,… 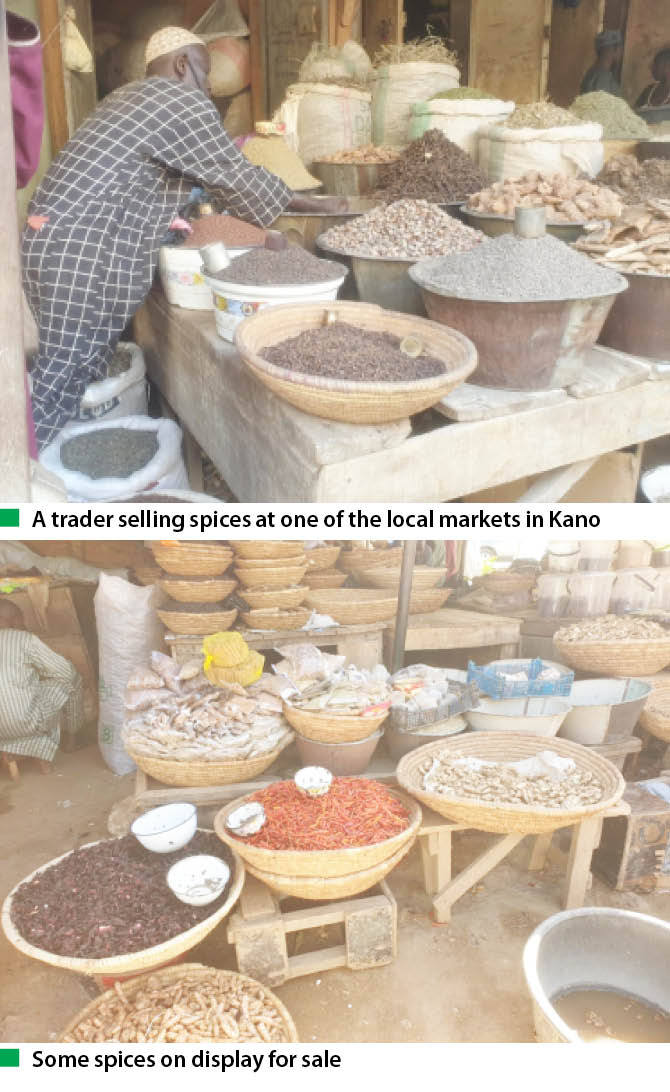 Consumption of spices among Nigerians is becoming popular and consistent day-by-day. It has become one of the major ingredients used in cooking and making tea, as well as other drinks, particularly in northern Nigeria. With spices, women now find it easier to make delicious foods with an aroma that may lead to unprepared patronage.

The extent to which spices are used makes it possible for more business opportunities, thereby becoming an avenue for huge revenue and income generation, aside from providing employment opportunities among people.

As one of the sectors of agricultural produce, spices are now farmed in bulk, with many farmers specialising on it.

Although they were highly patronised by mostly big restaurants and big tea palaces, it is gathered that nowadays, small restaurants and other people are using spices in their foods, especially during weddings and other festival celebrations. It is said that to some extent, people now prefer spices in their cooking than ingredients that were known to be used in cooking.

In a visit to some of the markets where only spices are sold in the state and the whole region, different types were seen, with many of them imported.

Spices that were known to be consumed by Arabs, Europeans and some sub-Saharans Africans are now consumed by Nigerians and even becoming some of the basic ingredients needed for cooking.

Daily Trust on Sunday gathered that majority of the people are using spices to cook jollof rice or stew, as well as make tea.

It was also gathered that some of the spices are used for medicinal values, besides adding aroma to food; hence they are now widely accepted by women.

It was also gathered that most of the spices consumed by majority of the people are ginger, clove, thyme, cinnamon, black pepper, turmeric, fenugreek, cardamom, black seed, scent leaf, garlic, nutmeg, among many others.

According to some dealers, there are over 100 varieties of spices in the market and each variety is patronised for different purposes.

Speaking to Daily Trust on Sunday, one of the major dealers in Kurmi market, which is the hub of spices in Kano, Alhaji Shafiu Kurmi, said he had been in the business for over 40 years but it had never witnessed rapid boom until these years when people are getting attracted to it.

Majority of the people that are into the business who were mainly selling ginger, cloves and pepper are now into spices, which attract more sales than only ginger and cloves.

He said while some spices are farmed in Nigeria, others that are more expensive are imported from mostly Arabian countries like Egypt, Dubai and some parts of Morocco. He said others were also imported from India, while few were from European countries.

According to him, some are purchased from Cameroon, Niger Republic, Mali and other African countries.

“Each place has its own specific spices. Here in Nigeria, we have ginger and turmeric, which are mostly from Kaduna. Some other places have their own too. Some people come from different places to buy from us. We have customers from Mali, Chad and Niger Republic who come to buy mostly ginger, turmeric, cloves and other spices from us. We also buy what they have in their various regions,” he said.

Although he could not estimate the amount they made in a week, Alhaji Shafi’u said that every week they recorded a significant number of sales and he thanked God as the business had paid him for these long periods. He said he had achieved a lot through the spices business, and presently, he has three more shops in the market.

“Our goods are measured in different ways. Some will buy sacks, some half of a sack while some will buy in measurement from plates (mudu). Even women come to buy few of the products. So it is difficult to estimate our earnings, but in a day one can sell spices of up to N200,000. Sometimes it can be more than that amount or below, it depends on the level of patronage.”

He said the only way their profits could be determined would be after a yearly review, adding that every year they count up to N1million as profit.

Speaking about local consumption of spices, a retailer in Rimi Market, Musa Abubakar Muhammad, said majority of their customers were women, and they normally bought in wholesale or retail. He added that women that are into local curry making and food selling were mostly their customers as they patronise them frequently.

“When a woman said we should give spices for cooking we know what to give her. There are about 10 spices that are used in cooking, like ginger, nutmeg, garlic, coriander, shammar, girfa, bare leaf and so on. For making tea, they buy cinnamon, cardamom, ginger, cloves, mint leaf, girfa, lemongrass, among others.

Muhammad added that there are other segments the women use spices, which is for newly wedded wives who are about to go to their matrimonial homes. It is also used for medicinal values for many illnesses affecting human beings.

For the spices market at Yankaba market, many of the traders said they earned a living in the business through the little purchase from people who came to purchase vegetables from the market.

“We are not the dealers but every day we record huge sales from our customers who buy little of the spices. We measure milk tin, mudu, and even half of a tea,” one of them, Haruna Kamshi, who spent 15 days in the business said.

“Lawan Bashir, who also sells spices in the popular Yankura market, said they normally bought from Yankaba, Kurmi and other markets in Kano, adding that sometimes they get some from Maiduguri and some parts of Niger.

He added that they usually recorded huge sales at the end of the month when salaries are paid as most of their customers are on salaried jobs. He also said that sometimes they would get huge patronage from women who are into curry business.