Despite the fact that the Constitution of the Federal Republic of Nigeria stipulates independent operations among the three arms of government, which are the executive,… 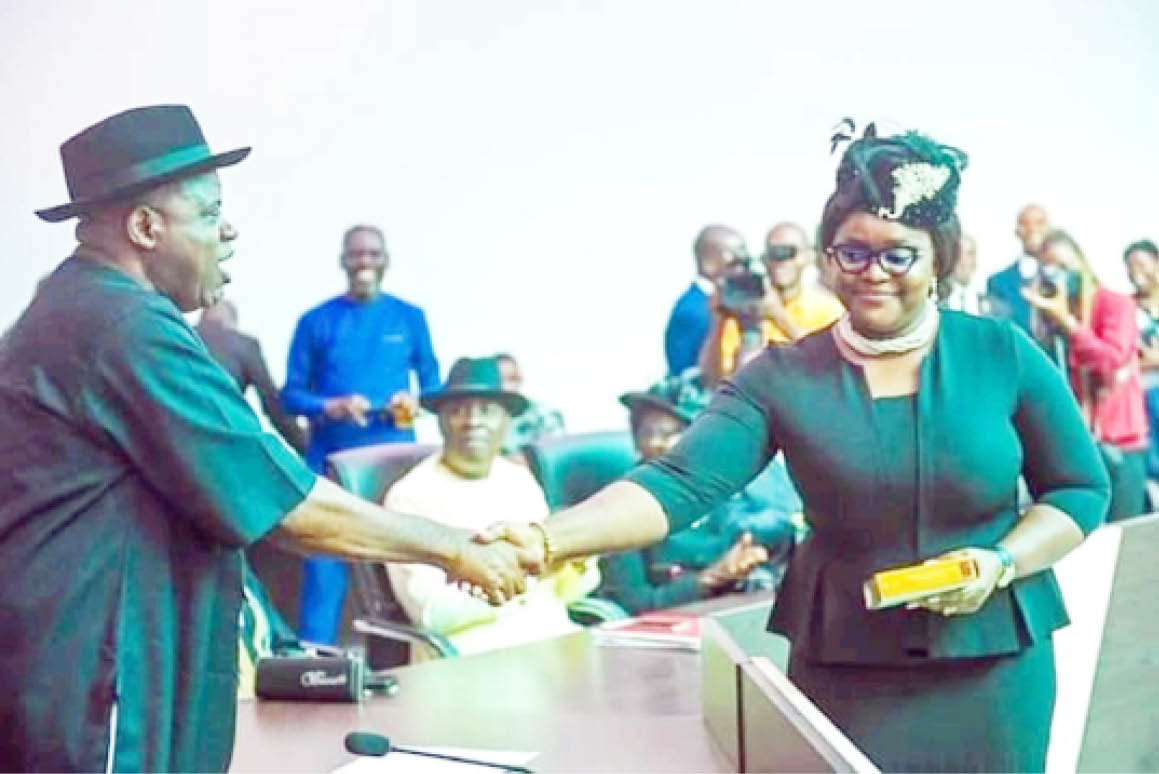 Gov Douye Diri in a handshake with the wife, Mrs Patience Zuofa-Diri, during her swearing in as judge at the executive chambers, Government House, Yenagoa

Despite the fact that the Constitution of the Federal Republic of Nigeria stipulates independent operations among the three arms of government, which are the executive, the judiciary and the legislature, Nigerians are worried over the recent appointment and swearing-in of Mrs Patience Zuofa-Diri, wife of the Bayelsa State Governor, Douye Diri, as a state high court judge by her husband.

Though Section 318 of the constitution is very explicit on the appointment of state high court judges, Daily Trust gathered that the concern of the masses is the politics behind the appointment of Mrs Diri as a judge while her husband is serving as the head of the executive in the state.

At different times, there have been situations where governors’ wives serve as judges in different levels of the judiciary, but which are different from the situation in Bayelsa in the sense that none of those wives/judges were appointed by their husbands as serving governors.

While some Nigerians have described the action of Gov Diri in recommending his wife for such appointment as “nepotism”, others see it as a feat achieved on merit.

Mrs Patience Diri had been working in the state’s Ministry of Justice for years before her husband was sworn in as governor in February 2020. She was a senior director in the ministry before her elevation.

Speaking during the swearing in of Mrs Diri and three others as judges of the state high court recently, Gov Diri promised that his administration resolved not to compromise the neutrality and independence of the judiciary as it was the last hope of the common man.

The other judges swore in are a former Registrar of the Bayelsa State High Court, James Lookie; a law lecturer at the Niger Delta University, Dr Simon Amaduobogha; and legal practitioner, Mrs Christine Enegesi. They were all recommended by the National Judicial Council (NJC) to be appointed as judges.

Urging the new judges to serve the people with unfailing honour and commitment, Gov Diri said his administration prioritised the judiciary in view of the significant role it played in society, noting that they were found suitable for the exalted office after meeting some strict protocols.

He said, “These are strongholds of justice, protectors of liberty, symbol of law and order, custodians of the rule of law and embodiment of the hopes and dreams of our people. And if they can be treated with such impunity, then we are all much poorer for it.

“It is germane to restate that separation of powers should not in any way suggest division. In the end, we have a shared obligation to serve the people of Bayelsa State. We are one government united by one common purpose to deliver the hopes and dreams of the people of the state.”

According to him, the procedure from clearing up to the final stage of the appointment has nothing to do with the governor because the recommendation was done by the Chief Judge (CJ) of the state and as was provided for in Section 318 of the Constitution of the Federal Republic of Nigeria.

He, however, said although the case of Mrs Diri could not rule away the fears of Nigerians knowing the circumstances Gov Diri came into power.

He explained that: “The appointment of Bayelsa State Governor’s wife as a judge of the state high court is more legal than political because of the tedious procedures involved in the appointment before it is confirmed by the governor.

“The procedure has nothing to do with the governor from clearing up to the final stage of the appointment, the recommendation for the office of judge in the state is provided for in a virtue of section 318 of the constitution of the Federal Republic of Nigeria as well as the guideline for the procedure for the appointment of a judiciary officers.

“The recommendation is made by the state Judicial Service Commission, in case of appointment of the state high court judge, the question the public should ask is whether the person is qualified or if there are persons who are more qualified than her,” he said.

A human rights crusader and member of Civil Liberty Organisation, Bayelsa State chapter, David-West Bekinwariy, said if Mrs Diri merited the appointment and the normal procedures were followed there was no constitutional breach but urged the judge to ensure that she discharged her functions without interference.

He, however, expressed worry over the situation where every governor whose wife is affiliated with the judiciary would want to make them judges using executive powers, saying the trend should be checked.

He said, “Ordinarily, my position should be that her recommendation to the position of a judge should be pending till the tenure of the husband elapses. She shouldn’t have been recommended while the husband is serving as governor. She should rather remain in the ministry or progress to a permanent secretary, but if legally speaking, she is qualified to be a judge, she should not be denied her privileges because the husband is a governor.”

Daily Trust further gathered that Mrs Diri, who has since been sworn in as a judge will understudy another senior judge for three months according to the practice in the judiciary before she will be assigned by the CJ to a court of her own.