Elders and chiefs of Egbudu-Akah, an agrarian community in Aniocha South local government area of Delta State have blamed the Delta State Government for the… 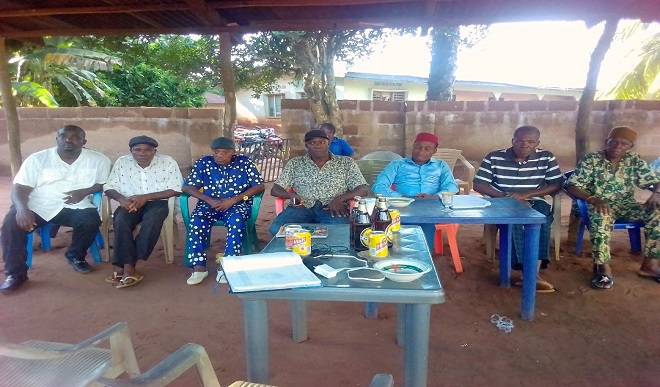 Elders and chiefs of Egbudu-Akah, an agrarian community in Aniocha South local government area of Delta State have blamed the Delta State Government for the death of their son, Obi Paul Nzemeke Obi Okolie.

The community leaders also accused the state government of instigating insecurity and communal crises that have witnessed loss of lives and destruction of properties worth millions of Naira.

According to the elders, kingmakers and council of chiefs, the government deliberately undermined the customs and traditions of Egbudu-Akah on kingship process and installation by giving official recognition and encouragement to Prince Paul Obiokolie to desecrate the sacred throne which had resulted in his death.

Daily Trust correspondent, who visited the bereaved community at the weekend for the burial and interment rites of the late scion of the Obi Okolie ruling family, gathered that the community resisted plans to inter him within the palace precincts as the custom of Egbudu-Akah demands that kings be so interred.

When our correspondent arrived the remote community, over ten trucks of Army and anti-riot police squads were seen zooming off as palpable tension clung the air when it was learnt that supporters of the late traditional ruler had planned to inter him with his royal ancestors within the precincts of the palace. He was however buried at his personal residence.

But the elders, chiefs and community leaders vowed that they will never allow the late Obi Okolie to be buried within the palace, as it was regarded a sacrilege, insisting that the deceased was not their king and was never accepted as their traditional ruler, despite government’s official recognition.

The late Obi Paul Obi Okolie, had been embroiled in intense tussle over the royal stool with his half brother, Solomon Oguagu, who seemingly has the backing of Umu-Illoh royal family, the kingmakers and majority of community.

The Onishe (Kingmaker) of Egbudu-Akah, Chief Stephen Osiegbu told Daily Trust that after the death of the former king, HRH Obi Alfred Okolie (JP), the palace chiefs and heads of the three quarters that comprised Egbudu-Akah including Olene quarters, which is Ogbe-Onishe (King makers) had followed due customary and traditional processes to choose and instal Prince Solomon Oguagu as the new Obi of Egbudu-Akah, who sits on the throne to commence the burial rights of his father, the late king.

"We were baffled to observe a rebellion from Paul and some of his brothers that the stool belongs to him as the first son and he went on to plan and did another funeral for the late king, claiming he had been installed king.

"While, we were finding amicable approach to resolve the tussle over the throne, the Delta State Government, through the Office of the Deputy Governor hurriedly and callously gave the staff of office to Prince Paul Obi Okolie without consulting or clarifying from the elders who are custodians of our customs. Last time we saw him in this community was that same day of presentation of Staff of Office to him. Now where is he today?” the Onishe said.

An 84 year-old head of the Umu-Illoh ruling family, Elder Francis Enemokwu told our correspondent that he has the prerogative to announce and present the would-be king to the Onishe (Kingmaker) after thorough selection process.

"Aside being the head of the Umu-Illoh ruling house, I am the next direct family member in line to their father, the late king Alfred Obiokolie (JP). It is sacrilegious to fight for the stool; any member of the family who struggles for the stool, when he is not the rightful person to ascend the throne will be met with mysterious calamity and the consequence is abominable death as it has happened to Paul.

"I saw when all of them were born and so I am in a proper position to tell the circumstances of their birth. Our tradition is a variant of direct primogeniture. You may be indeed the son, but the circumstances of your birth could disqualify you from ascending the throne.

"Basically, our tradition disallows a male child born by an adopted wife like in the case of Paul, though he was the first son, but the mother was first married by their father’s elder brother who even had a son, Emmanuel an elder half brother of Paul, who is even still alive.

"But in the case of Solomon, the mother was the virgin wife of their father, the late king. He was barely one year and six months old when he was removed from Egbudu-Akah community away from the king and the palace, to the palace of Idumuje-Ugboko, for royal tutelage and upbringing as Egbudu-Akah custom demands. So from birth he was being prepared as king and that is why I presented him to the kingmakers and the community on the demise of our late king", head of Umu-Illoh ruling family recounted.

Obi Solomon Oguagu, who was installed traditional ruler on 20th October, 2016, told Daily Trust that they woke up to a military siege since Wednesday last week, patrolling the length and breadth of the community to and fro Ekuku-Agbor, the neighbouring town of Ika South local government area.

"We’ve been seeing trucks of Army and the Police in the community since the past three days and this has always created tension and forced indigenes to flee to their farms and bushes. We had summoned communal labour to maintain the only earth road leading to the community, but the current insecurity has driven our men into hiding as usual.

"Today (Saturday) is market day but our women cannot go to market because of fear, assault and harassments so we are afraid to move freely. We were not told why they besieged our community so I put a phone call to the DPO of Nsukwa Division, the Deputy Commissioner of Police and even our Councillor in the council but none of them told me the reason for the heavy security presence in the community for the past three days", the community ruler explained.

He continued: "Although this is not strange since my installation as the Obi of Egbudu-Akah on 20th October, 2016. The military invasion usually come as many as 17 trucks and anytime they invade the community, my people run into the bushes and they keep interrupting economic and normal life of our people.

Obi Oguagu said the people became apprehensive following the arrest and detention of scores of chiefs and elders, including himself in police custody for about four months over alleged charges of murder, conspiracy, arson and breach of peace, security.

On the rumoured installation of the late Paul Nzemeke’s son, Augustine as heir apparent to the throne, Obi Oguagu averred that it is not possible as the gods of the land has sounded in unambiguous note, adding that Prince Paul’s death is a lesson even the deaf could hear.

But counsel to late Obi Paul Nzemeke Obiokolie, Barr Afam Ochei, asserted that Egbudu-Akah customary laws and tradition upholds primogeniture in the ascension to the community’s throne and therefore Prince Augustine Nzemeke Obiokolie has undergone installation rites precedent to his father’s burial and internment rites on Saturday, adding that processes are underway to confer on him government’s recognition with Staff of Office.