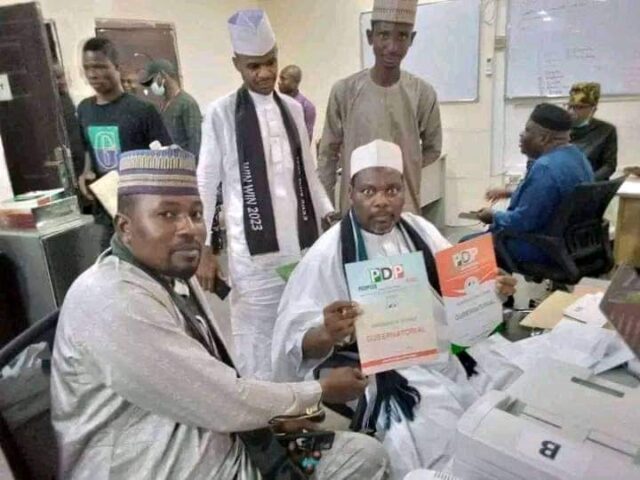 A former Commissioner of Works and Infrastructural Development in Kano State, Engineer Mua’zu Magaji, has picked the PDP governorship form, saying the All Progressive Congress (APC) has woefully failed Nigerians at all level.

Magaji was relieved from office twice by Governor Ganduje for ‘celebrating’ the death of Abba Kyari and for attacking the Buhari-led administration.

He was later dragged to court by Ganduje for alleged defamation of character, a matter that is still before the court.

Briefing journalists, shortly after he purchased the 2023 Kano State Gubernatorial Nomination and Expression form, under the Peoples Democratic Party (PDP), Magaji said he resolved to contest for the Governorship position after consultation and support from political key stakeholders in Kano as well as the youth across the 44 Local Government Areas.

He pointed out that ruling APC has nothing to show or campaign to Nigerians, particularly in Kano State where citizens placed a high expectation on the Abdullahi Umar Ganduje-led administration.

”I can tell you that I have vast experiences in different aspects of life from administration, managing resources, international connection and above all giving opportunity to the youths to be prosperous. We gave all we have to the ruling APC to succeed at all levels.

“We contributed immensely with the expectation that President Muhammadu Buhari at the National level and Abdullahi Umar Ganduje will develop the country and Kano State politically, economically and socially, but sincerely speaking, there is nothing to write home about.”

He lamented that the issue of insecurity, destitution and unemployment is rising at an alarming rate without any effort to address it.