Column No.6: Why stop at just two ministers?

Nigeria has an abundance of brains, to the point that other nations blatantly ‘steal’ from us 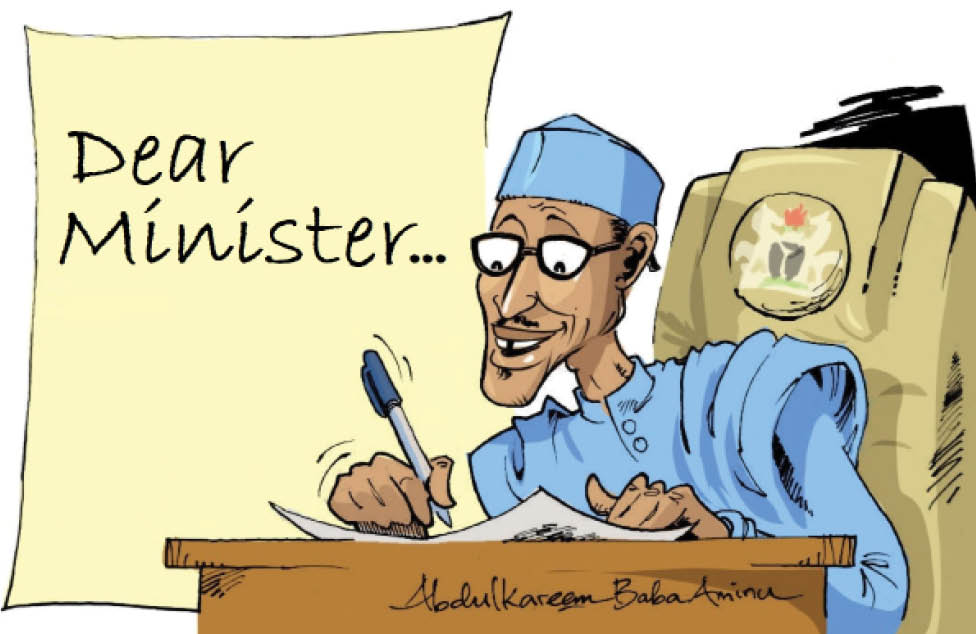 When the news broke that President Muhammadu Buhari had sacked two ministers, I was not even mildly interested. After all, a large chunk of his current cabinet elicits nothing but sighs of boredom and exasperation from Nigerians, myself included. And for good reason, too. This is because almost every sector in the nation is struggling with a legion of problems, with many of the people supervising their relevant ministries coming across as overburdened, or even clueless. The sack of the Minister of Agriculture and Rural Development, Alhaji Sabo Nanono, and that of Power, Engineer Sale Mamman became known during the weekly Federal Executive Council (NEC), a first since the president came to power in 2015. It is particularly intriguing when one considers that both ministers are his long-time associates.

Does anyone remember Babatunde Fashola’s stint as a 3-ministry minister? Probably yes, and most likely for all the wrong reasons. I also won’t bore anyone with how long it took for the president to pick his ministers when he first got elected, so I don’t digress further. While it immediately looks like there suddenly is some form of reckoning for those who don’t perform, it would certainly make more sense if the process is shown to Nigerians in a proper, transparent manner. This would help show that the whole thing is done in good faith, and not for optics of some sort. While there are a couple of performing ministers, as well as some up-and-doing heads of parastatals and key agencies, I will not mention them here so it is not misconstrued. I also won’t name the non-performers, chiefly because they are quite obvious, and known by name and action, or inaction.

Nigeria has an abundance of brains, to the point that other nations blatantly ‘steal’ from us. We also have no shortage of brilliance in all fields imaginable. We have enough technocrats to run any project of any scale. Our main problem has been that of overall management, which we can overcome simply by putting square pegs in square holes. We have no shortage of manpower, but we have a severe drought of work done. Instead of leading and managing from a vantage point, ministers are running around with parastatals dangling on their sides like amulets and charms, themselves like headless chickens coming up with one ineffective policy after another, all imploding under the sheer weight of a lack of will to execute by those who should. To call this kind of culture shameless is an insult on shamelessness, honestly speaking.

Part of the solution remains that more ministers should go, and get replaced by more forward-thinking, team-playing individuals who will deliver. If two can go, why not more? I know there’s the notion that more are on their way out, but I am personally tired of what the government should do being projected as mere notions. The mantra all along should have been ‘perform well or go’, with a super-generous window of six months or a year for each new minister. If it sounds drastic, well I’d say drastic times call for drastic measures. And I look to the almost-casually referenced Cabinet Office with hope – and probably-unfounded optimism – that the right thing will always be done.

The reactions in the media and even online were interesting to say the least. While I’ve been knocking the Federal Government in this piece, I’m still firmly of the opinion that kudos – not knocks – should be given to the Presidency for making the right moves. Many of the aforementioned reactions went as far as saying it has to do with politics, but I doubt that. We shouldn’t allow unfounded views and unproven theories blind us when what appears to be a good move has been played. While I won’t cheer on, I certainly don’t recommend jeers. We should as a people learn look at things in a positive light, even if I’m first to admit it’s difficult to maintain a sunny mindset in this our Nigeria of today.

As the media is flooded with all kinds of reports and leaks regarding the double-whammy sacks of Nanono and Mamman, all I can do is hope that the right amount of thought and consideration went into the replacement of the two sacked ministers with that of Environment, Dr. Mohammad Mahmood Abubakar and that of State, Works and Housing, Engr. Abubakar D. Aliyu, respectively. While it will certainly result in a domino effect, it is left to see if the outcome will be positive, or otherwise. I repeat: More heads should roll, and not the few good ones we have. ‘Too little, too late,’ some would say. But I’d counter with ‘better late than never’. After all, do we have any other choice?