The Rotary Club in Kano State has donated a fully equipped medical laboratory to Kawaji community. The President of Rotary in Kano, Akin Opeyemi, said… 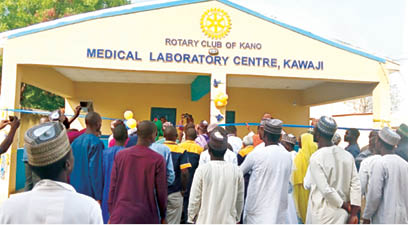 The Rotary Club in Kano State has donated a fully equipped medical laboratory to Kawaji community.

The President of Rotary in Kano, Akin Opeyemi, said while the club was committed to social development intervention projects, the last time a building was carried out was 12 years ago at Sharada, hence the need to have another came after consultations last year to have a lab project for the benefit of humanity.

He said the laboratory became necessary looking at its dire need by most communities across the state, noting that Kawaji was blessed to have been identified and selected for the project after examination of the facility.

He, therefore, called on the members of the community to maintain and make judicious use of the facility for the benefit of all.

The District Head of Kawaji, Umaru Adamu Kawaji, who officially inaugurated the project, commended the club for identifying with his community, while assuring continued support and prayers for the intervention.