For seven straight years, Governor Ben Ayade of Cross River State has made the headlines over the state’s annual budget. Known for adopting jaw-breaking phrases… 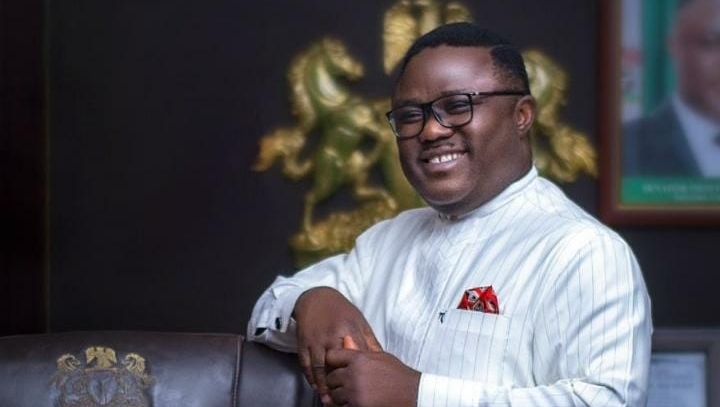 For seven straight years, Governor Ben Ayade of Cross River State has made the headlines over the state’s annual budget.

Known for adopting jaw-breaking phrases for the budget titles, the Professor, who is in his second and final term in office, has been repeatedly accused of “reducing the fiscal procedure to an annual comic spectacle.”

This week, the governor returned to the public scene with one of those high-sounding budget names that set the social media space buzzing. To some commentators, Ayade’s budgets were, like in the words of legendary playwright, William Shakespeare, “full of sound and fury signifying nothing”.

Below are the seven budgets christened by Ayade, since he became governor, and the drama that followed:

Ayade’s first budget as Governor of the state was christened ‘Budget of Deep Vision”. He proposed a budget of N350 billion for the 2016 fiscal year which represented an increase of 273.7 per cent over the 2015 appropriation bill of the government of Liyel Imoke, his predecessor.

He explained that the budget was structured on deliberate principle of capital/recurrent budget ratio of 84 percent to 16 percent in order to meet the demands.

Ayade’s 2017 budget was christened ‘“Budget of Infinite Transposition”’ and it was pegged at N701 billion. Its highpoint was the promise by the Governor to build an expensive 275 km ‘super highway’, that will cost the state N648billion and the Bakassi deep seaport billed at USD 2billion.

Ayade had said during the presentation of the budget that “If after four years I have not achieved the superhighway I promised, then I am not Ayade. I am going to shock the country. I promised that I will deliver. I will not fail the people.”

But did he deliver in the end? Not quite.

Ayade went for broke in 2018 by having a N1.3 trillion budget of ‘Kinetic Crystallization.’ He said the budget was designed to add value to the socio-economic development and well-being of the people of the state, adding that it would ‘crystallise’ what the state had achieved in the past two years of his administration.

During the presentation of the 2018 budget, the governor was reportedly in tears and requested a cleric in the audience to hold the signed copy of the budget in his hand and lead everyone present in prayers for divine intervention to make the budget achievable.

The N1.043 trillion 2019 budget of Ayade was tagged ‘Qabalistic Densification.’

While presenting the budget before the State House of Assembly, Ayade had said the budget was meant to drive the industrialisation agenda of his administration.

According to him, the budget was designed to drive the realisation of at least one industrial project in each local government area of the state with a view to creating wealth and move the people away from poverty.

However, the All Progressives Congress (APC) which was an opposition party then said the budget was unrealistic and had reduced the state to a laughing stock.

Explaining the meaning of ‘Olimpotic Meritemasis,’ Ayade said the budget was anchored “in the spiritual force which is the third energy,” stressing that Meritemasis is an active cell that stimulates growth in a young plant, which in this case represents the state.”

The 2021 budget was tagged ‘Budget of Blush and Bliss” and according to the governor, it was aimed at improving the welfare of residents of the state.

In the breakdown of the N277.7 billion appropriation bill sent to the State House of Assembly, N192billion was pegged for recurrent expenditure which represents 69 per cent of the budget.

“31 per cent of the budget is now being reduced and left for basic expenditure which is the sum of N85.1 billion.

“The 31 per cent is to deal with infrastructure, water resources, foreign relationship, information system, climate change and also strengthen our social media unit’’.

The governor’s 2022 Budget estimated at N276 billion was tagged “budget of Conjugated Agglutination.”

In it, “the sum of N106 billion is reserved for recurrent expenditure while N170 billion will go for capital projects.

Ayade said his government will not embark on any new projects, but will ensure that all the outstanding ones projects are completed.

“The 2022 budget tries to marry reality, certainty, aspiration and hope. It is a budget that will ensure that all the projects embarked upon are completed.”

Experts’ views on the budgets

They have also frowned at his style of budget presentation each year where breakdowns are hardly made available to the public.

In a phone interview with Daily Trust on Sunday, former Commissioner for Justice and Attorney-General of the state, Attah Ochinke said, “I can hardly have any views about the 2021 budget. What’s trending about it is the comical title of the budget: Conjugated Agglutination, which distracts people. The details of the budget are not available.  Therefore, it lacks substance. When such come out, we can then engage such.”

Ochinke who is also chairman of Nigeria Bar Association Calabar branch, said, “As it is, it does not allow for assessment and critique of the various estimates and proposals.”

Also reacting, a youth leader and chairman of Young Progressives Party (YPP), Anthony Bissong Attah, said the budget is a departure from the previous trillion-naira projection, and yet a far cry from reality.

He stressed that it would have been better to peg it at N87 Billion knowing the economic situation of the state.

“For a state whose combined federal allocation and Internally Generated Revenue is less than 50 billion naira annually, it would have been more realistic to peg the budget at 87 billion naira at most. I’d thought that previous budget performance would guide the preparation of this new budget.”

“The argument that the budget is intended to be utilised to complete existing projects is also very weak. You can’t spend over six years building and abandoning projects just to wake up to complete them in election year. We can’t continue to do the same thing every year and expect a different result.”

While it’s not certain that the latest budget will be fully implemented, one thing looks 98 percent clear, Ayade will make the headlines over next year’s budget title as it has become a trend for the governor.

Critical stakeholders and some other citizens of the state are of the view that perhaps, Ayade ought to be more concerned about impact and implementation of his budgets than the bombastic titles he gives the documents year in year out.