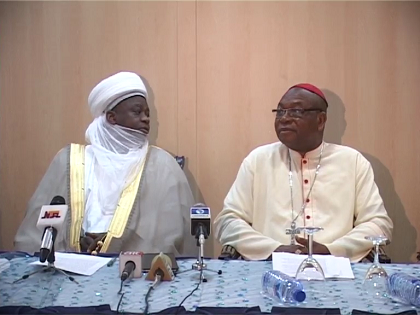 The Muslim Rights Concern (MURIC) has condemned the leadership of  Christian Association of Nigeria (CAN) for faulting the claims by the Sultan of Sokoto and President General, Nigerian Supreme Council for Islamic Affairs (NSCIA), Alhaji Muhammad Sa’ad Abubakar that Christians were not persecuted in Nigeria.

READ: Persecution of Christians: We stand by our position – CAN

He also said that CAN did not table any complaint of persecution at the Nigerian Inter-Religious Council (NIREC) which is the official National interfaith platform for treating such matters.

“MURIC takes serious objection to the response of CAN to the Sultan. Imagine CAN president, Dr. Samson Ayokunle arguing that the Sultan should have waited for the next meeting of NIREC to fault his (Ayokunle’s) claim instead of debunking it publicly. How reasonable is that? How can the Sultan wait for a private forum to fault a lie that was told in public? Are the discussions in NIREC in the public domain?

“Those who make provocative statements in public should not expect a pat in the back in the privacy of their offices. As you make your bed, so you will lie on it.

“The Sultan is a notable bridge-builder primus inter pareil and a peace-maker nulli secundus. If some religious leaders specialize in creating tension, the Sultan’s vocation is dousing tension. If some leaders are adept at inciting their followers, the Sultan is always there to calm nerves. He is level-headed and has never incited Muslims. Not even once. He is well known as an advocate of peace. This explains why he is called the Sultan of the people.

“Is it fair to blame such a man for telling you the truth? MURIC will not stand akimbo while CAN weaves its web of lies around the Sultan. CAN lied by saying Christians are the targets of Boko Haram and bandits.  That is a lie from the pit of Jahannam and CAN knows it,” Akintola said.

According to him, Zamfara State is widely known as the base of banditry, and wondered how many Christians are in Zamfara.