Chelsea are considering making a bid for Arsenal captain Pierre-Emerick Aubameyang in the summer. Arsenal have reportedly accepted that the Gabon star will not accept… 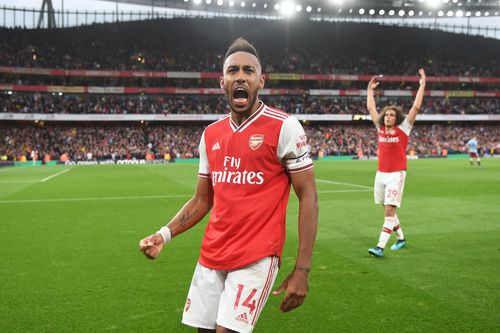 Chelsea are considering making a bid for Arsenal captain Pierre-Emerick Aubameyang in the summer.

Arsenal have reportedly accepted that the Gabon star will not accept a new contract and would be willing to let him go for as little as £50m when the season is completed.

Aubameyang is out of contract at the Emirates in 2021 and looks no closer to signing an extension, for which he would apparently want a significant pay rise.

Arsenal, therefore, look set to have to sell the Gabon international this summer to avoid losing him for nothing 12 months down the line.

When asked whether Aubameyang would leave Arsenal, Jones replied: “It’s more than likely.”

However, even if the Gunners were to accept a £50m bid, it’s not known whether that would apply to a bid from Chelsea – one of their most direct rivals geographically and competitively.

There are indications that Real Madrid and Arsenal may do business together in the summer for Aubameyang.

Real Madrid have been backed to try and entice Arsenal into selling Aubameyang by including one player in a swap deal.

The 30-year-old is valued at £50million by the north London club but of those teams linked with him, none appear willing to meet that fee in straight cash.

Spanish football expert, Guillem Balague, has warned that the likes of Barcelona and Real Madrid do not have the finances to do the deals they have in their sights this summer.

That means there could be a flux of swap deals and loan deals between clubs all across the continent.

And Arsenal legend Kevin Campbell can see a scenario in which Mikel Arteta is offered the services of Luka Jovic.

The 21-year-old Serbian, a target for Chelsea, only joined Los Blancos a year ago for a fee in excess of £50million but has scored just twice in 24 games at the Bernabeu.

Campbell told AFTV host Robbie Lyle on a 24-hour NHS charity live stream: “One thing I will say about those teams, they have pieces that could entice Arsenal to do some trade.

“There could be players involved, swapping players with a little bit of money.

“Let’s talk about Jovic, who isn’t really getting a look in at Real Madrid. He could be a bargaining chip to try and lure Aubameyang over there.

Pierre-Emerick Aubameyang joined Arsenal from Borussia Dortmund in January 2018 for a club-record fee – and made a huge impression straight away.

The Arsenal’s captain followed it up with 31 in the following season, scoring 22 league goals in the process to share the Golden Boot with Liverpool’s Sadio Mane and Mohamed Salah.

In 75 Premier League games since his arrival, Aubameyang has netted 49 times, one of the best goals return in the history of the league.