Charles praises Queen’s reign as he is formally confirmed king

At the moment the Queen died, the throne passed immediately and without ceremony to the heir, Charles, the former Prince of Wales. He will be… 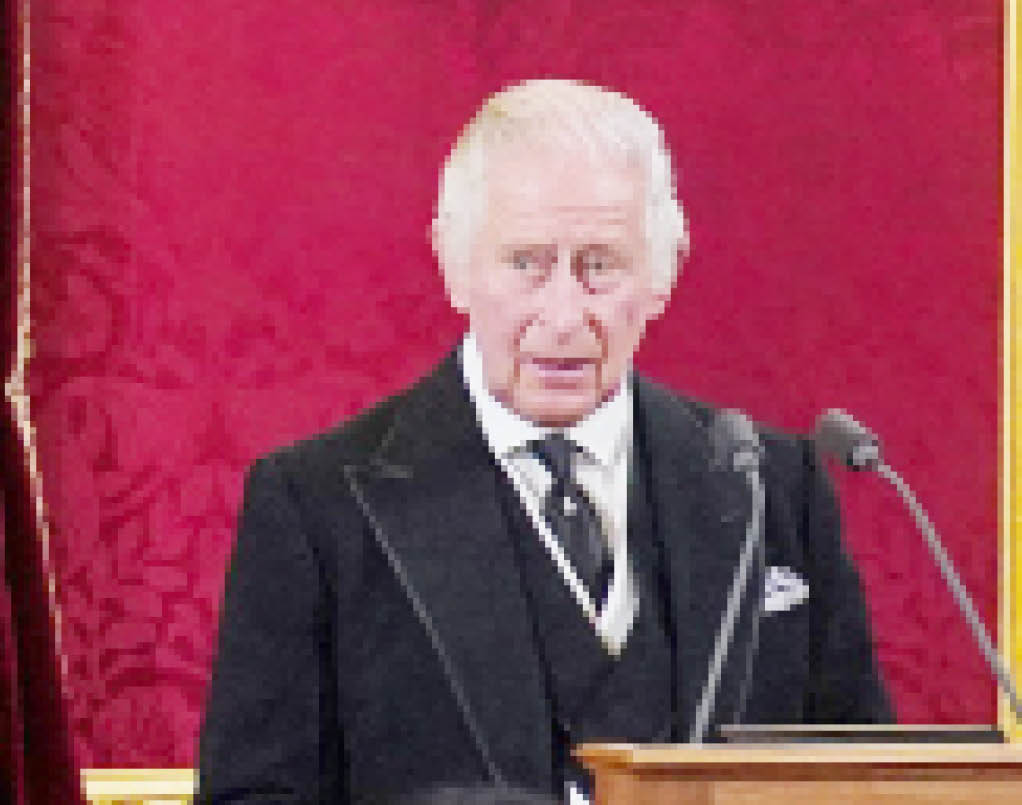 Britain’s King Charles III speaks during a meeting of the Accession Council in the Throne Room inside St James’s Palace in London on September 10, 2022, to proclaim him as the new King Photo: AFP

At the moment the Queen died, the throne passed immediately and without ceremony to the heir, Charles, the former Prince of Wales. He will be known as King Charles III. That was the first decision of the new king’s reign. He could have chosen from any of his four names – Charles Philip Arthur George.

King Charles III has praised the Queen’s “unequalled reign” after being proclaimed king at a ceremony at St James’s Palace.

The King became the monarch after the death of his mother, but a meeting formally confirmed it on Saturday. He also approved the day of the Queen’s funeral being a bank holiday though it is not known what date this will be.

Speaking before the Accession Council, the king said his mother’s death had been an “irreparable loss”.

Queen Elizabeth II’s funeral will be held on September 19 at Westminster Abbey in London, Buckingham Palace.

The Queen will lie in state for four days before her funeral on September 19, Buckingham Palace has confirmed.

She will be taken from Buckingham Palace to Westminster Hall on Wednesday, where the coffin will be rested on a raised platform known as a Catafalque.

Her coffin will be draped in the Royal Standard flag, and once in Westminster Hall, it will be topped with the Imperial State Crown, orb and sceptre.

Members of the public will then be able to file past and pay their respects.

The Grand Hall is the oldest part of the Palace of Westminster, at the heart of the British government.

The last member of the Royal Family to lie in state in the hall was the Queen Mother in 2002, when more than 200,000 people queued to view her coffin.

Meanwhile, senior MPs in the House of Commons, including Prime Minister Liz Truss, have been swearing allegiance to the new monarch.

Making his address in the State Apartments of St James’s Palace in London, King Charles said: “It is the greatest consolation to me to know of the sympathy expressed by so many to my sister and brothers, and that such overwhelming affection and support should be extended to our whole family in our loss.”

He later spoke of the Queen’s “selfless service,” saying: “My mother’s reign was unequalled in its duration, its dedication and devotion. Even as we grieve, we give thanks for this most faithful life.”

The king added that he would “strive to follow the inspiring example” he was set by his mother in taking on the “heavy responsibilities of sovereignty.”

It is the first time the historic ceremony, which dates back centuries has been televised.

The king himself was not present for the first part of the meeting when he was proclaimed monarch by the Accession Council, made up of senior politicians, judges and officials.

The clerk of the Privy Council, Richard Tilbrook, proclaimed Charles “King, head of the Commonwealth, defender of the faith,” before declaring, “God save the king.”

The packed room, including all of the six-living former British prime ministers, repeated the phrase. The proclamation was then read out on a balcony above Friary Court in St James’s Palace.

The new king paid warm tribute to his mother, but this was the point when Charles began to look forward to his own reign.

Before the Accession Council’s ranks of senior politicians and public figures, King Charles dedicated the rest of his life to serving as monarch.

It was a mix of ritual, ornate language and constitutional practicality.

Charles is now the head of state and here was the seamless and symbolic transfer from one reign to the next, with oaths and signatures.

The inkpot used had been given to him by his sons, Prince William and Prince Harry.

The announcements also confirmed that the day of the queen’s state funeral would be a public holiday.

But here was the king publicly shouldering his new responsibilities, promising to follow in the queen’s example. It was the choreography of continuity.

Just before the ceremony inside, hundreds of people were allowed through from the Mall into the palace’s outdoor Friary Court to witness the proclamation up on the balcony.

They brought their babies and children and carried bunches of flowers. Some brought their dogs on a walk, diverted to witness the moment.

After the state trumpeters played a fanfare, the privy councillors who had left the ceremony and gathered outside raised their voices to said, “God save the king.”

Cheers of “hip-hip hooray” were heard coming from people lining the roads – both sides of the palace, and ceremonial guns fired close to nearby Green Park.

As senior figures from politics past and present filed away, senior Labour MP Harriet Harman described the ceremony inside as “solemn,” both because of the death of the queen and the weight of the occasion for the new king.

The second reading of the Accession Proclamation was also met with applause and cheers outside the Royal Exchange in London on Saturday.

On Saturday afternoon, senior MPs took the oath or affirmed in the House of Commons.

Taking her oath, the prime minister said, “I swear by almighty God that I will be faithful and bear true allegiance to His Majesty King Charles, his heirs and successors, according to law, so help me God.”