Change of baton, name as Adeleke takes charge of Osun 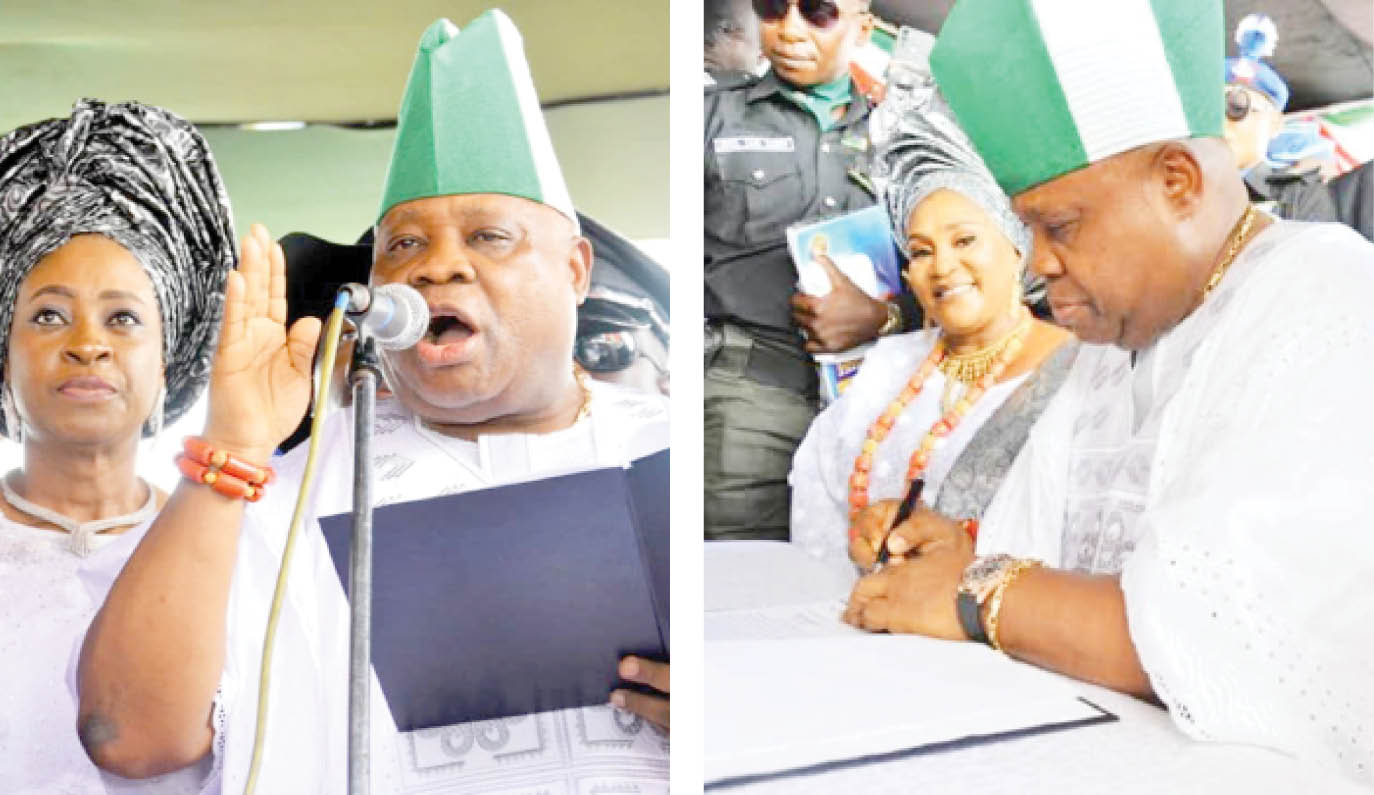 Osun State Governor, Ademola Adeleke, taking the oath of office and allegiance during his swearing-in ceremony at the Osogbo City Stadium in Osun State yesterday

Top wigs of the opposition Peoples Democratic Party converged on Osogbo to celebrate what was termed as a major victory for the party as Senator Ademola Adeleke was sworn in as governor of Osun State.

Adeleke garnered 403, 371 votes to defeat the then-incumbent Governor Gboyega Oyetola, who secured 375, 027 in a keenly contested election in July this year.

His victory brought to two the number of states held by the opposition party in the South West as PDP holds Oyo State.

Adeleke came to the political limelight after replacing his late brother, a former governor of the state, Isiaka Adeleke as the Senator representing Osun West Senatorial District. He had earlier contested and lost the governorship election in 2018 to Oyetola.

The new governor of Osun State, Ademola Adeleke was sworn in by the Chief Judge of the state, Justice Adepele Ojo at the packed-full Osogbo City Stadium.

In his address, the new governor expressed gratitude to the people of the state and assured that he would not betray the confidence reposed in him.

Osun State not State of Osun

One of the major decisions announced in his inaugural speech was the change of the name of the state from the State of Osun to Osun State. Adeleke also reversed the Osun appellation from “The State of the Virtues” to “The State of the Living Spring”.

He, however, did not give reasons for the change.

The former name was approved by a former governor of the state, Chief Rauf Aregbesola.

Adeleke promised to make life better for all the citizens of the state.

He said: “I promised that the expectations of the workers, traders, artisans, farmers, business owners, students, pensioners, traditional and religious leaders and indeed all residents of Osun State will be met by the grace of God and the cooperation of everyone”.

He ordered the immediate establishment of a panel to review all appointments and major decisions of the immediate past administration taken after the 17th of July 2022.

“Let me, therefore, announce an immediate return to the status quo of all fresh appointments, placements and other major decisions taken by the immediate past administration with effect from the 17th of July, 2022.”

He said: “Under my watch as the governor of Osun State, I will boldly correct all past injustice, corrupt acts or policies by any previous administration, which are against the collective interest of our people.”

Daily Trust reports that this decision is not unconnected with the recent appointment of 30 permanent secretaries by the previous administration. Adeleke had promised to reverse the appointments soon after the announcement was made.

He also directed the immediate freezing of all government accounts in banks and other financial institutions.

Adeleke pledged to operate an open and transparent government. He said: “Our administration will demonstrate a high sense of urgency, transparency, justice and innovation to tackle and solve the problems of poverty, illiteracy, disease, and poor infrastructure. Your governor will be a people’s governor. I will be accessible, responsive, consultative and proactive in handling small and big matters of state governance.”

“I know that as a product of the collective will of you my people, there is a heavy weight of history on my shoulders and I accept the urgency of your expectations, the depth of your aspirations and your conviction in me to build a better state.

Adeleke assured workers of a better welfare package and assured the labour unions of his support.

He said “My administration will restore the integrity of the civil service, which has been bastardised through favouritism and political considerations. We will give the civil service a better orientation with a view to restoring its professionalism. In doing this, we will be fair and firm as we act only in pursuance of the public interest. I wish to assure all labour unions in the state of our administration’s willingness to protect workers’ interests and promote their welfare at all times. We will be a labour-friendly government.”

He said some employment and appointments of several Obas by Oyetola would also be reviewed. “Those actions were indeed vindictive measures against the people of Osun State for voting them out of office.”

The new governor said his directives would be backed up with appropriate executive orders.

Governor Adeleke’s spokesperson, Rasheed Olawale later told Daily Trust that the new governor will deliver on his promises to the people.

Reacting to the inauguration, the Chairman of the Christian Association of Nigeria in the state, Amos Kayode-Oguntunde and the Chairman of Osun State Muslim Community, Mustafa Adeleke-Olawuyi, respectively, charged the new governor to put the people first.

Similarly, two guests, who attended the swearing-in, Philip Omodemi and Precious Omoregie, said the event portends a new beginning to the people of the state.

In his farewell message, released in Osogbo by Mr Ismaila Omipidan, his media aide, Oyetola stated that his administration paid N97 billion of the debt it inherited in 2018 when he assumed office.

He said his administration did not borrow any money from anywhere to finance the state’s economy, stressing that he kept faith and maintained fidelity to his electoral promises throughout his tenure.

In another development, hoodlums yesterday created an atmosphere of fear as they attacked members of the Amotekun Corps during the inauguration.

The Commander of the Amotekun in the state, Amitolu Shitu, confirmed that five of his men were assaulted by the hoodlums.

Also, rival groups, yesterday began to overthrow their leaders at various motor parks in the state.