Darwin Nunez headed home in the 77th minute as Benfica stunned Ajax to reach the Champions League quarter-finals on Tuesday, winning the second leg of… 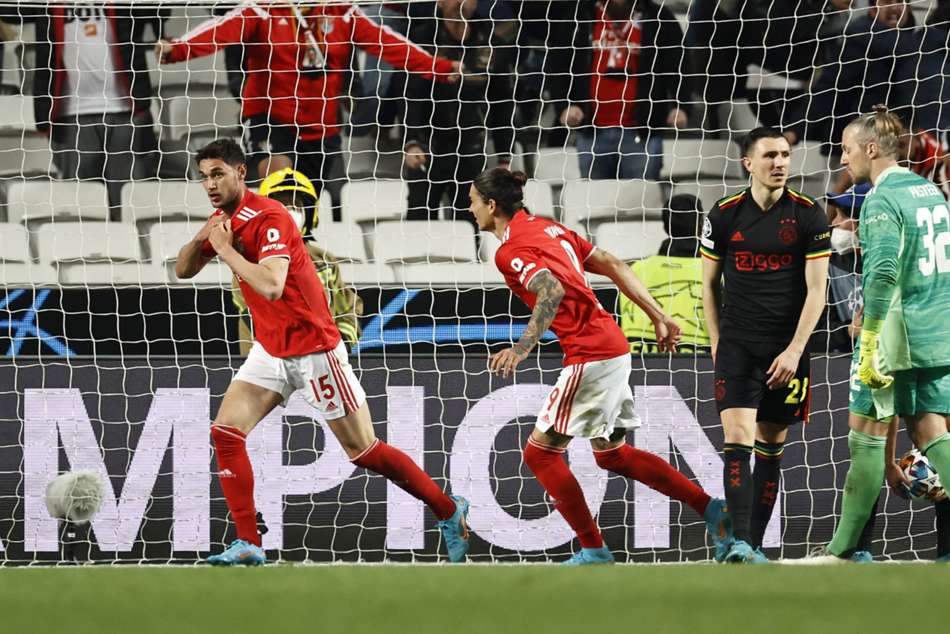 Darwin Nunez headed home in the 77th minute as Benfica stunned Ajax to reach the Champions League quarter-finals on Tuesday, winning the second leg of their last-16 tie 1-0 in Amsterdam to advance 3-2 on aggregate.

The Portuguese side had not managed a single attempt on target until Uruguayan striker Nunez beat goalkeeper Andre Onana to Alex Grimaldo’s free-kick and headed in to silence the Johan Cruyff Arena.

Ajax, who had dominated the first half, could not recover from that blow and go out while two-time European Cup winners Benfica look forward to Friday’s draw for the quarter-finals.

Having sent Barcelona packing in the group stage, they will now appear in the last eight for the first time since 2016.

“We are among the eight best teams in Europe. The team worked so hard to achieve this against really difficult opponents,” said Benfica coach Nelson Verissimo.

Ajax’s star striker, Sebastien Haller, had been hoping to score in an eighth consecutive Champions League game this season having netted a remarkable 11 goals in his first seven appearances in the competition.

Yet he was upstaged by the 22-year-old Nunez as Benfica’s own prolific forward found the target for the 26th time in all competitions since the start of the campaign.

“We were not good enough in either box. We should have scored but didn’t take our chances and then we conceded an avoidable goal,” Ivory Coast international Haller told broadcaster Canal Plus.

“It was the perfect game for them. We leave with regrets but unfortunately that is football. The team who dominate do not always win. We just have to learn from our mistakes.”

A swashbuckling Ajax side had won all six games in the group stage before twice leading against Benfica in the first leg in Lisbon only to have to settle for a 2-2 draw.

Haller, who has 32 goals in total this season, had scored at both ends in that game and he had the ball in the net in the seventh minute here only for the effort to be ruled out because Dusan Tadic was flagged offside in the build-up.

Erik ten Hag’s prolific side, who are top of the Dutch Eredivisie, looked at their best in the first half but could not find a way through as Steven Berghuis blasted over on the volley from just inside the box.

Ryan Gravenberch then unleashed a superb shot that was tipped over by Benfica goalkeeper Odisseas Vlachodimos, and they did not look as threatening in the second half.

Instead, they found themselves behind for the first time in the tie as Nunez struck, and a Benfica team who lie third in the Portuguese league, 12 points behind leaders Porto, held on to join the cream of Europe’s elite in the last eight. (AFP)