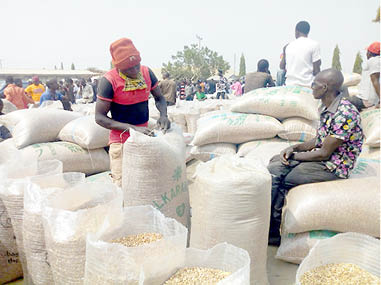 The harvest season has begun in earnest across the country but the prices of major grains are rising instead of coming down as expected.

Every year, the prices of major grains like maize, paddy and soybeans crash even below the cost of production, leaving many farmers lamenting.

Throughout one of the country’s worst flood disasters in 2012, prices of grains stayed low during the October-November harvest even as the country lost a lot of crops to the disaster.

Although the 2022 flood affected crops, many of the crops, like maize and soybeans, were cultivated in the upland areas. Rice was also cultivated massively in the upland farms in addition to the Fadama regions.

In the last two weeks, there has been a sudden rush for grains in markets across the country, which has seen prices go up even in villages and semi-urban towns.

In Katsina, our correspondent reports that the recent Central Bank policy of redesigning the major naira notes effective December has stimulated panic-buying of farm produce across the local markets of the state by people who would not want to take their money to the bank.

According to the policy, the existing N200, N500 and N1000 would be redesigned, and Nigerians were advised to deposit their cash in such denominations in commercial banks for the new notes.

However, those in shady businesses and those who detest the idea of banking, especially in rural areas, seem to have no other means of changing their old naira notes than to resort to mass purchases of farm produce.

According to brokers in the grain markets, buyers and their agents are now going after the farmers, especially of soybeans, which recorded over 17% increase in price within the period of one week.

Malam Sani Garba from Dandume LGA said not only grains merchants or locals, but the elite too, have their agents across the markets purchasing produce for them in bulk.

“You see, since last week, our markets are saturated with buyers of maize and soybeans, hence their prices have gone up. Even the merchants that buy the produce for processing factories have no option but to partake in the stampede.

He added that the development might continue up to January next year considering the proliferation of processing factories across the country and the population growth, which places a high demand on farm produce yearly.

Some of the farmers interviewed by this reporter expressed their joy that demand for farm produce was high and they were making huge sales.

Shehu Mani Tandama from Danja  LGA said they have suffered from the high cost of fertiliser, crop diseases and then the flood that washed away many rice farms. Therefore it is time now for them to sell their produce at handsome prices.

“But for this development, many farmers, especially those of rice, were at a loss. We are now making revenue to cover the cost of farm rent, pesticide/herbicide, fertiliser and labour. If the trend continues many of us will smile to the bank,” he said.

Mani called on farmers to exploit the situation and plan for the next farming season and not just to squander the revenue they realise.

On the other hand, an agricultural economist and farmer, Umar Hassan, from Giwa, Kaduna State, cautioned the government to tame the recent development to avoid a full-blown food crisis considering the state of the nation’s economy; insecurity that has affected many farming areas, the recent flood, and crop diseases.

“There is nothing to celebrate because most buyers are not doing it in good faith but to avoid the traps set up by the government to trace illicit funds.

“Therefore, their target now is to hide the huge money at their disposal and exploit the situation to maximise profit on the farm produce at the expense of the common man,” Umar Hassan said.

Markets across Nassarawa State have also been reacting to the sudden rush for grains sparking a price hike.

The cost of paddy and maize in Awe, Obi, Doma, Agyaragu, Lafia and Nassarawa-Eggon has gone up to N32,000 and N25,000 respectively.

Paddy particularly continues to witness a significant increase, and farmers are usually approached at the farm gates.

In Niger State, investigation by Daily Trust showed that despite the fact that new rice has started coming to the market, the price was still high.

Sellers told our correspondent that the new rice was yet to flood markets as expected, as they hoped that this year would witness a crash in the price of the commodity in the state.

In Taraba State – a major grain producer – our correspondent reports that paddy rice and maize usually cost more at this time.

The price of the two produce is much higher than what they were sold for at harvest time last year.

Daily Trust learnt that the high price of paddy rice was a result of the flood which destroyed over 60 per cent of rice farms across six local government areas of the state.

A farmer, Sani Rufai, told Daily Trust that the rice being harvested is the one produced in farms far away from the river banks.

He said farmers in areas not close to the rivers were the lucky ones as they witnessed bumper harvest.

He said there is going to be a shortfall of paddy rice because of the flood which is responsible for the high price of paddy rice in the state.

While speaking with Daily Trust in Abuja, the president of the All Farmers Association of Nigeria, Architect Kabiru Ibrahim, said, “the talk of some people buying off grains with the money they stashed away instead of going to the banks due to the naira redesign is not surprising.”

He said therefore that it could cause turbulence in the food system because there will be an adverse effect of hoarding.

“I however think this is more of a matter bordering on speculation than reality,” he said.

The farmers’ association president maintained that the hike in prices of maize, paddy, etc at this time “portends trouble for the country.”

“The shortage likely to be experienced due to the incessant flooding is already rearing its head, and we should not live in denial of the fact.

“Another explanation may be the dwindling fortunes of the naira, the production costs incurred by the farmers due to high cost of fertilisers and other inputs,” he stated.