In the 1960s and up until the late 1970s, Nigeria was a household name in the global agriculture business. Nigeria was an international player in… 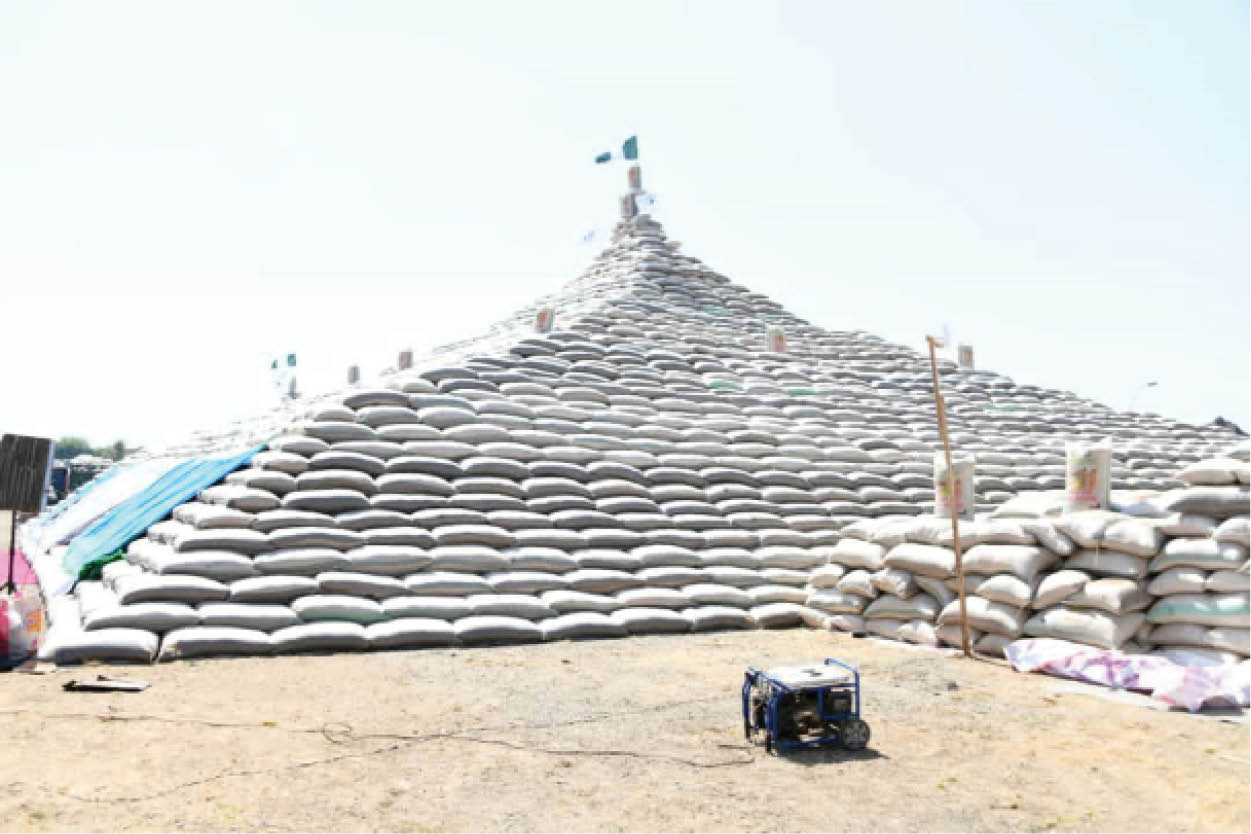 In the 1960s and up until the late 1970s, Nigeria was a household name in the global agriculture business. Nigeria was an international player in Groundnuts, Cocoa, Rubber, Soya Beans and other cash crops. It relied heavily on agric-dollar to finance governance.

But when Nigeria began to make huge revenues from crude oil sales, it relegated agriculture. This has been the biggest undoing of the country as Nigeria lost additional streams of income and millions in employment opportunities.

But when the current Central Bank Governor, Mr Godwin Emefiele took over, he made a commitment to return Nigeria back to the agricultural global market. He introduced a lot of initiatives to help local agriculture thrive. Among the several initiatives he introduced was the forex restriction on some cash crops like rice and maize so Nigeria doesn’t continue to be a dumping ground for these products.

The policy was also to help local farmers rev up capacity and create wealth and employment. The CBN also introduced the Anchor Borrowers programme which was aimed to finance local smallholder farmers. The ABP has become the biggest financer of smallholder farmers in Nigerian history.

With the Anchor Borrowers Programme, the CBN has returned the agriculture pyramids into Nigeria again, from the rice to pyramids in Niger State, Kebbi State and in several parts of the country.

On March 2, 2021 in Birnin Kebbi, where the CBN governor went to receive the latest rice pyramids from the farmers and the flag-off of the 2020 wet season harvest aggregation and 2020 dry season input distribution under the CBN-Rice Farmers’ Association of Nigeria (RIFAN) Anchor Borrowers’ Programme, as part of the fifth anniversary of the Anchor Borrowers’ Programme (ABP).

He said ABP has emphasised the need for all stakeholders to sustain current efforts championed by the Bank to galvanize agricultural production towards meeting the requirements of Nigeria’s growing population.

He noted that Nigeria was naturally blessed to meet her food requirement and had no reason to continually repeat mistakes of the past of neglecting agriculture.

“The rhetoric around neglect of previous years will remain part of our history and the best time to correct those mistakes is now and every stakeholder must contribute their quota to guarantee the realization of these national targets,” he said.

“Covid-19 and the associated lockdowns globally have shown that nations only export out of their reserves. Let us start building our own reserves now,” he added.

The flag-off, which comes barely three months after the CBN showcased sky-high pyramids in Minna, Niger State, to highlight its intervention in the maize value chain, also featured the display of pyramids, which were rice harvests brought in by farmers in the state.

He noted that the ABP, which is an essential part of President Muhammadu Buhari’s drive for economic diversification, had improved the fortunes of rural farmers, transforming agriculture into a potential for economic growth.

According to Emefiele, the ABP, in the past five years, had been characterized by huge successes, learning points and challenges. Specifically, he noted that a total of 2,923,937 farmers cultivating 3,647,643 hectares across 21 commodities through 23 participating Financial Institutions had been financed in the 36 States of the Federation and the Federal Capital Territory from inception till date.

He also disclosed that the Bank, under the 2020 wet season CBN-RIFAN partnership, financed 221,450 farmers for the cultivation of 221,450 hectares in 32 States.

“The North-West zone with 85,261 farmers that cultivated 120,218 hectares represented 38.5% in total number of farmers and 54.3% in a total number of hectares financed,” he disclosed, adding that the massive pyramids being launched in Kebbi were harvests from various fields across Kebbi State and a confirmation of the positive outlook of the Anchor Borrowers’ Programme.

Speaking further, Emefiele said the partnership between the CBN and the Kebbi State Government and RIFAN aimed at strategically complementing the Economic Sustainability Plan of the Buhari Administration. Following the President’s approval of the resuscitation of the Nigeria Commodity Exchange (NCX) and the commitment of N50b by the CBN and other stakeholders, he said a vibrant commodity exchange would enhance post-harvest handling, guarantee effective pricing for farmers, minimize the adverse effect of middlemen and ultimately transfer the gains from primary production to other nodes of the value chain.

While acknowledging the importance of loan repayment to the sustainability of the programme, he stressed that the CBN was constantly engaging the farmers to enhance their trust in the system, provide a competitive price arrangement and facilitate effective market linkages for their outputs.

To further create value and transfer these gains along the value chain, he said the CBN also maps miller to off-take the paddies and track the release of outputs scheme.

To underscore the CBN support to local rice farmers, the Rice Farmers Association of Nigeria (RIFAN) recently said that since 2015, the Central Bank of Nigeria (CBN) hasn’t allocated one dollar to fund rice import even as it said at least N1.2bn worth of rice is consumed daily in Nigeria.

RIFAN also debunked claims from some quarters that the CBN owns RIFAN contractors who supplied farm inputs in the Anchor Borrowers Programme (ABP) being implemented by the CBN.

The National President of RIFAN, Alh. Aminu Goronyo had said in a chat with newsmen that local farmers fortunes have improved since the CN stepped on the scene.

The CBB also crystalizes its local farmers support with the recitation of commodities exchange so that the local farmers can get the right process for the farm produce.

Following the president’s approval of the resuscitation of the Nigeria Commodity Exchange (NCX) and the commitment of N50 billion by CBN and other stakeholders, Emefiele said a vibrant commodity exchange would enhance post-harvest handling and guarantee effective pricing for farmers, among others.

He said at recent stakeholders meeting of the NCX that the Anchor Borrowers’ Programme (ABP) and Commodity Development Initiative (CDI), sought to strengthen key agricultural commodities’ value chains, enable improved productivity in the agricultural sector, and increase sourcing of inputs locally by stakeholders in the manufacturing sector.

These programmes he said have also helped to improve our self-sufficiency in the production of key staple items, which is in line with the government food security objectives.

Mr Emefiele explained that the CBN has been engaging the management of NCX and other key stakeholders on strategies to revamp the Exchange and upgrade its facilities, similar to what exists in other African and western countries where commodities exchanges are a key drivers of economic growth.

It is against this backdrop he said that Mr President considered and approved a proposal, for the repositioning of NCX, in order to consolidate on the government’s efforts aimed at strengthening the agriculture value chain, part of which includes connecting farmers to markets beyond their immediate environments.

•That CBN, as majority shareholder of NCX, should collaborate with Nigeria Sovereign Investment Authority (NSIA) and Africa Finance Corporation (AFC), under the Infraco Structure, to develop and implement a strategic repositioning plan for the NCX to make the NCX an efficient world class Commodity exchange.

•The formation of a Steering Committee (SteerCo) chaired by the CBN Governor and including representatives from NSIA and AFC as well as the Federal Ministries responsible for Finance, Budget & National Planning; Industry, Trade & Investment; and Agriculture & Rural Development, to oversee the implementation of this strategic plan

•The revalidation of CBN’s 59.7% majority shareholding stake in NCX, to enable it implement far reaching measures, which includes reconstitution of NCX’s Board and Board Committees, appointment of Chairman by the CBN, and an investment of at least N50 billion through the InfraCo structure.

•That CBN is expected to engage the Nigeria Postal Service on possible utilisation of its assets to develop model warehouses across the federation.

•The SteerCo may co-opt any other Ministry, Department and Agency of government to see to the effective implementation of the Strategic Turnaround Plan.

. That the current plan to privatise the NCX be stopped forthwith given the unfortunate arbitrage opportunities which the government has noticed in the private sector arrangement; which has become an obstacle in moderating food prices in Nigeria.

Indeed there are better days ahead for the agricultural sector to contribute even more significantly to the gross domestic product and employment generation in Nigeria.