It’s not the best of times for the residents of Lokoja, the capital of Kogi State. No thanks to the much acclaimed global  climate change… 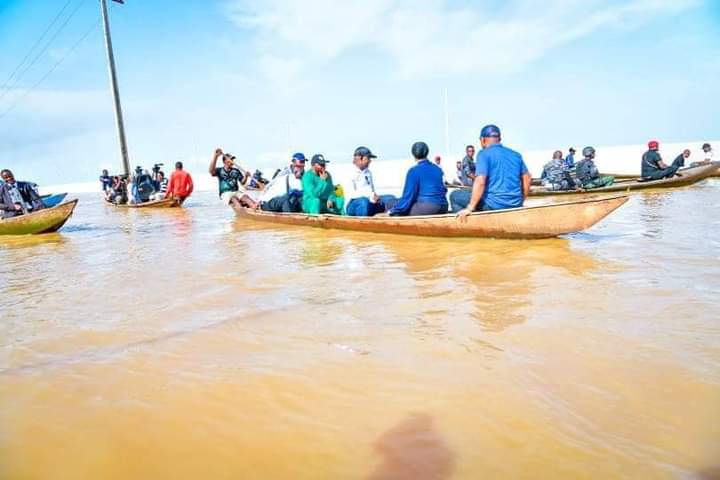 It’s not the best of times for the residents of Lokoja, the capital of Kogi State. No thanks to the much acclaimed global  climate change phenomenon. It has announced its presence in the state since 2012, hitting Lokoja residents hard with flood water.

Ten years later,  the lethal  River Niger flood water is back, wreaking  havoc on the residents of the capital city  with great intensity.

Flood begins to recede in Benue

A staff member of National Inland Waterways Authority (NIWA), David Aigbe, who was on duty at Ganaja- Lokoja highway where  flood water has cut off the state from the eastern flank, said the level of water flood at its peak  in 2012  was below the level recorded on September 30, 2022.

Locals  said the flood water at   Ganaja-Lokoja, Gadumo and Andakolo   extension in Lokoja was life-threatening due to the fact that the areas are situated  directly at the confluence point of River Niger  and River  Benue.

Jubril  Adebayo, a resident of Gadumo, said the turbulence of the rivers – Niger and Benue meeting  point increases the water current at that zone

The same fear is being entertained by the residents of Kabawa as the water has started surging up towards highlands in the areas.

Consequently,  thousands of residential houses, business centres or shops, and offices have been submerged and  valuable property of the residents  destroyed.

As at last count, the Federal Ministry of Information and  Culture, including a branch of Living Faith Church at  the 200 housing unit and most  structures, including plants  in that area around the Meme river bridge along Lokoja-Ajaokuta road were  submerged completely.

Also, Kogi State House of  Assembly quarters in Gadumo-Lokoja on the same route were flooded, forcing the  lawmakers  to relocate to a safer place in the city.

The water flood also sacked  two most popular markets in Lokoja – Kpata and Old Market, as traders  have to relocate to deserted IBB Main Drive Way under a makeshift arrangement, to display their wares for sale.

In the same vein, many driveways or street roads in the city  were cut off, making it impossible to access such areas in Lokoja  by cars, motorcycles or Keke Napep, except by canoes or engine boats.

A resident of Adankolo, Ademu Yahaya, who claimed to have lived in the suburb  since he was born stated that  many of the houses in the enclave have  collapsed as a result of the flooding.

“The houses we laboured for years to build are no more. By the time this flood recedes, many of us will not get a house to lay our heads. They will have all been washed away into River Niger. Sad, so sad!” he said, almost shedding tears.

Most residents bemoaned the twist of fate that befell them, saying they could not  understand why River Niger decided to vent its anger on them in this way.

Like other residents in the flood water region of Lokoja, Funso David stated that it is better to imagine this ugly event than to experience it in this hard way.

He said this water flood is a sad reminder that nature would always have its way, no matter how one tries  to cage or control it  to serve mankind’s desire.

‘“We now go to our houses to retrieve one thing or the other in a canoe or engine boat. Few weeks ago, who would have thought of that.

“The government constructed an embankment at the River Niger to prevent it from overflowing its bank. This water still found a way out and navigated to flood houses and cut our roads. This is a hard lesson I have to learn in my lifetime,” he said.

Daily Trust reports that the embankment at the River Niger bank at Kpata and Kabawa end of the city was done to prevent  flooding in the flank of the city.

But the flood water, through the channels that feed and collect water into River Niger, entered the roads and submerged everything in sight –  houses, plants and  roads to make it impassable.

It was noted that boat operators have latched on the flooding in Lokoja metropolis to do brisk business, exploiting hapless residents.

A trip, no matter the the short  distance, attracts the sum of N100 and above, particularly on flooded highway, while N50 and above is being charged for a sail by canoe operators in the flooded areas.

Commuters in Kpata -kabawa to Nataco -Lokoja along Lokoja-Abuja Highway, including 500 Housing Unit to Ganaja village on Lokoja -Ajaokuta road and streets of flooded areas in Lokoja also have a sad story to tell.

While the travellers were groaning over the exorbitant transport fares being charged by boat operators, some families have been thrown into mourning as some boats were reported to have  capsized at Ganaja  area and Kabawa axis of Lokoja, drowning five people.

It was learnt that three out of seven passengers that boarded a boat on Monday evening at Ganaja died as their boat capsized  midway in their journey. One of the two corpses  picked up by divers  on Tuesday from the spot has been identified as  Abdullazeez Abdulfatai. Another victim is said to be still missing.

Also, it was reported that a  boat ferrying three persons  from Kabawa on Tuesday afternoon to a new market to link up Nataco -Lokoja end capsized with only one  survivor.

A corpse of one David was said to have been  picked up shortly after the incident, while the corpse of his  friend, whom he was travelling with, identified as Fatai, said to be a graduate of Federal College of Education, Okene is yet to be located.

The Kogi State police Command’s Police Public Relations Officer, SP William Aya, has confirmed that two corpses have been picked out so far  at the Ganaja-Lokoja end of the highway.

Meanwhile, to prevent the  outbreak of water borne disease, the management of  National Emergency Management Agency (NEMA) has drafted its staff to Adankolo – Lokoja to treat raw water from river Niger for the flood victims.

The state governor, Alhaji  Yahaya Bello, has asked the federal government to declare a state of emergency in Kogi State. He described the flood as a national disaster.

Governor Bello who was on a fact-finding tour of the affected areas of the capital city on Monday assured the victims of the readiness of his administration to  provide  relief to the victims.

The governor directed the victims to move to the IDP camp which the government has created to take care of the immediate needs and cushion their challenges.