The Centre for Dryland Agriculture (CDA), Bayero University, Kano, is leading other development partners in the groundnut value chain to produce russet resistant varieties of… 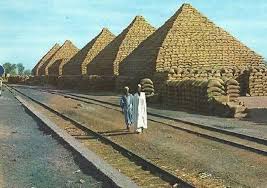 The Centre for Dryland Agriculture (CDA), Bayero University, Kano, is leading other development partners in the groundnut value chain to produce russet resistant varieties of groundnut, with a view to enhancing production of the crop in the dry-land areas of the country.

Over 50 hectares of demonstration farms have been cultivated in Kano with the technical support of the centre to boost production of different varieties of the crop for farmers.

Recall that groundnut was one of the main contributors to Nigeria’s Gross Domestic Product (GDP) prior to the discovery of crude oil in the 1970s. But production of the crop suffered a setback and total neglect that resulted to the disappearance of groundnut pyramids of Kano

Speaking to Daily Trust on Sunday recently during a visit to some of the groundnut farms, the deputy director, CDA, Professor  Sanusi Gaya, said about nine varieties of groundnut had so far been developed by the Institute for Agricultural Research, Ahmadu Bello University Zaria, in an attempt to revive groundnut farming.

“The reason we decided to embark on this tour of groundnut farms is to showcase what the Centre for Dryland Agriculture of Bayero University is doing with its teaming partners, especially farmers and seed companies, so that people will know the contribution of the centre to the development of agriculture in Kano State and Nigeria in general.

Before the oil boom, agriculture generally was the mainstay of the Nigerian economy, and there is no gainsaying the fact that groundnut contributed tremendously to the GDP of Nigeria. But from the late 1970s to 1980s, there was serious decline in groundnut production in Nigeria, which occurred due to a disease called russet.

Russet is a disease that reduced groundnuts production to zero level, but with the advent of science, new varieties are being developed by several institutions, both national and international. The institutions that are working in Nigeria have come with new varieties that are resistant to russet. And that is what is bringing groundnut production back to limelight in Nigeria,’’ he said.