President Muhammadu Buhari on Tuesday felicitated with a former Head of State, Gen. Yakubu Gowon, on his 87th birthday. The president, in a statement by… 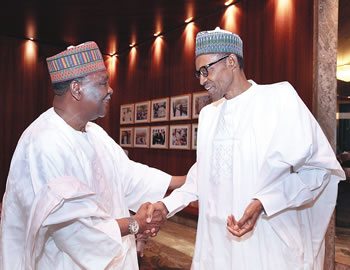 President Muhammadu Buhari on Tuesday felicitated with a former Head of State, Gen. Yakubu Gowon, on his 87th birthday.

The president, in a statement by his media aide, Garba Shehu, rejoiced with the leader and his family on the grace for good health and strength to keep serving.

He congratulated Gowon on the formidable role he had continued to play in the development of the country by always advocating peace and unity, and remaining a voice of reason and wisdom in good governance and democracy.

He also lauded the statesmanship of the convener and national chairman of “Nigeria Prays’’ whose vision for a greater country he said had resonated in the programmes he instituted in the 70’s like the National Youth Service Corps, creation of states and the Reconciliation, Reconstruction and Rehabilitation project, which he added had turned a reference for harmony.

Buhari said grace and fortune had continued to guide Gowon who started out as a career soldier, youngest military Chief of Staff and youngest Head of State before turning a Professor of Political Science and founder of the Yakubu Gowon Centre.

He said the centre had continued to support issues of good governance, infectious disease control, HIV/AIDS and malaria.

Buhari joined family, friends and Nigerians in praying for longer life for the visionary leader.

Similarly, the Northern Governors Forum yesterday felicitated with Gowon on his birthday.

In a congratulatory message, the chairman of the forum and governor of Plateau State, Simon Bako Lalong ,said the special day brought with it great joy for the life of a great personality who served the nation with uncommon loyalty, simplicity, fairness and courage particularly during trying moments.

Lalong said the forum was proud of Gowon, who in addition to his role of promoting peace and good governance around the world, remained a unifying factor and consistently mobilised prayers for the peace, progress and development of Nigeria.