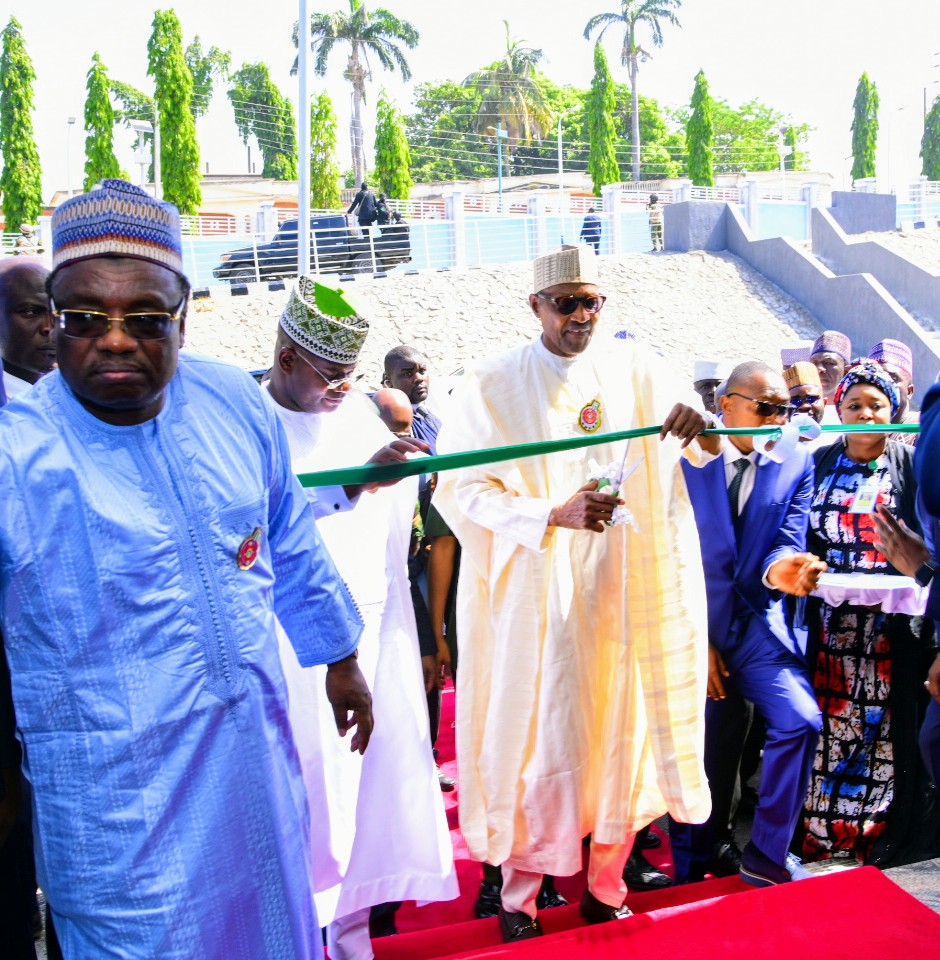 Speaking at Ohinoyi’s palace in Okene, Buhari said the commissioning of the projects was in realisation of the campaign promises to the people of Kogi

”I have been briefed by Gov. Yahaya Bello for the numerous projects he has executed for the people.

”The Confluence University of Science and Technology at Asara, Rice mill in Ejiba, hospitals in Idah, Kabba and Okene, construction of roads in the three senatorial districts, GYB Model Secondary Schools among others.

”In Lokoja, there is a flyover project, the first of it kind in Kogi State,” Buhari said.

The President noted that Kogi played host to AKK Gas Pipeline projects that would be completed in 2023, saying, it will boost the economic activities of the country and a multiplying effect on the people of the state.

”Our administration is working to reposition Kogi State as an investment hub through the activation of solid minerals in the state.

”No project that is dare in our heart like the Ajaokuta Steel Company located in Kogi, which we inherited in moribund condition from previous administrations.

”The steel company has disputes both locally and internationally. I am glad to say that through our concerted effort we are able to settle the dispute by paying some money and the company is now ready for concessioning to competent private investors that will operationalize it for the people of Kogi State and Nigerians at large.

”We are in talks with a reputable company in United State and by God’s grace Ajaokuta very soon will come back to serve the people of Nigeria,” he said.

He commended the governor for his impressive performance, saying, he had done very well in the area of security and project execution in Kogi.

”We are proud of him and we urged him to do more for the people.

”I am appealing to you to support the governor so that he can achieve and deliver more dividends of democracy and achieve peace and development of the state,” Buhari said.

”When I was sworn in on the 27th of January, 2016, we were determined to serve our people and we quickly commissioned the multidimensional sector to form what we call New Direction Blueprint.

”From that period till date, this particular document has served as a guide for accelerated development in Kogi State.

”We took our time to move around the state to determine what the people are lacking and what they really want that could improve the standard of living.

”Every year we zero down such need to our budgetary provision and we ensured that we follow it to the latter,” Bello said.

Bello stressed that his administration had fulfilled all its promises within the available resources and today those projects would be commissioned as well as others that may not be reached in other parts of the state.

”We ensure that the entire people of Kogi State benefit from our projects executed from internally generated revenue, national resources and every other resource God gave to us in Kogi state.

”Mr President, we hit the ground running and you told me to be courageous in leadership and how to bring out my best and today the project is an attestation of our best to the people of Kogi State.

”I followed your footsteps in ensuring that projects and infrastructures have a direct impact on the people,” he said.

He appreciated the President for all his support to Kogi State, and appealed for the completion of the Ajaokuta steel company, saying, ”no nation can achieve industrialization without iron and steel.

In his remarks, the Ohinoyi of Ebiraland, Dr Ado Ibrahim, who was represented by the Ohi of Okengwe, Alhaji Mohammed Anaje, appealed to Mr President for the revitalization of Ajaokuta Steel Company.

NAN reports that the President after inaugurating the Okene projects flew to Lokoja for the onward commissioning of other legacy projects in the state capital, the confluence city. (NAN)