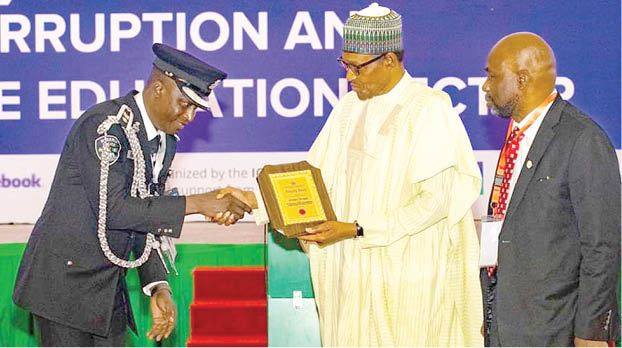 Amah, who was conferred the award at the 4th edition of annual national anti-corruption summit organized by the ICPC,  is the Divisional Police Officer in charge of Nasarawa Division in Kano State.

The decision to confer the award on Amah was based on the recommendation of the chairman of the ICPC, Prof. Bolaji Owasanoye, last month.

“After a bank staff confirmed the availability of the money at the bank to the victims, the transaction took place. However, the suspect arranged with armed robbers to track and rob the victims while they were transporting the money.

“When the matter was reported to the Police Division in Kano State where SP Daniel Amah was the DPO, they recommended investigations. In the course of the investigation, they traced the principal suspect, Mr Ali Zaki who offered $200,000 to the SP to kill the case, through a bank staff.

“The offer was rejected, the bank staff was promptly arrested which led to the arrest of the principal suspect. The $200,000 was recovered and registered as an exhibit.

“For this and other acts of integrity, SP Daniel Itse Amah is being conferred with the 2022 Public Service Integrity Awards.”