President Muhammadu Buhari has indicted the Academic Staff Union of Universities (ASUU) of corrupt practices. The union has been on strike since February 14 over… 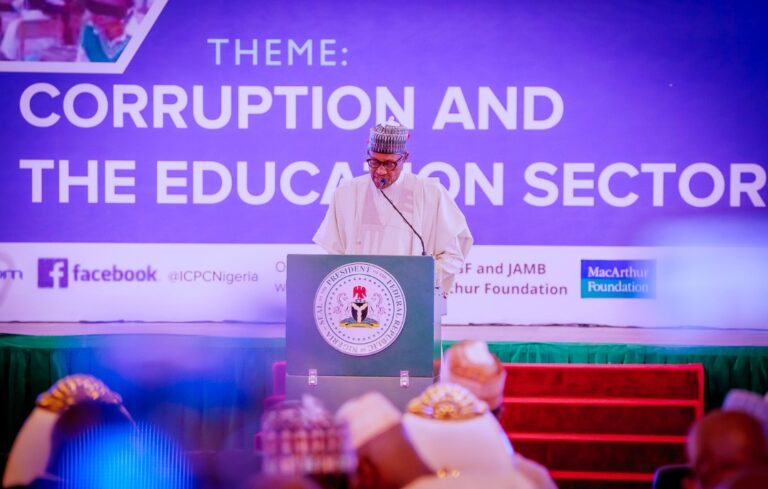 The union has been on strike since February 14 over demands bordering on allowances and salaries of lecturers.

The president has pleaded severally with the union to call off the strike but the lecturers have stood their ground.

While declaring open the Fourth National Summit on Diminishing Corruption organised by the Independent Corrupt Practices and Other Related Offences Commission (ICPC), Office of Secretary to Government of the Federation (OSGF) and Joint Admission and Matriculation Board (JAMB), Buhari said ASUU is no less complicit in the corruption in tertiary education.

He said corruption in the education sector continues to undermine investments, while critics downplay funding by focusing only on budgetary allocations, urging a more comprehensive re-evaluation of expenditure.

The president said: “This year’s summit will mirror how corruption undermines educational policies, investments and create an unfriendly learning environment for our youths.

“Incessant strikes especially by unions in the tertiary education often imply that government is grossly underfunding education, but I must say that corruption in the education system from basic level to the tertiary level has been undermining our investment in the sector and those who go on prolonged strikes on flimsy reasons are no less complicit.

“The 1999 Constitution places a premium on education by placing it on the Concurrent List, thereby laying the responsibilities of budgeting and underwriting qualitative education on both the Federal and State Governments.

“The total education budget for each year is therefore a reflection of both federal and state budgets and should be viewed as other financial commitments in their totality.

“Corruption in the expenditure of internally generated revenue of tertiary institutions is a matter that has strangely not received the attention of stakeholders in tertiary education, including unions.

“I call on stakeholders to demand accountability in the administration of academic institutions and for unions to interrogate the bloated personnel and recurrent expenditure of their institutions. Let me also implore the Unions to work with the government to put faces and identities to names on the payroll.

“Due to declining resources, the government cannot bear the cost of funding education alone. I task our academics to attract endowments, research and other grants to universities, polytechnics and colleges of education similar to what obtains in other countries.”