By Kemisola Agbaoye The news is meant to be a depiction of the world, which means that men and women voices should be captured in… 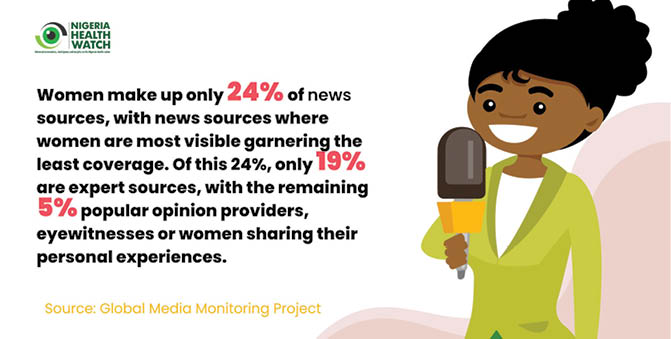 The news is meant to be a depiction of the world, which means that men and women voices should be captured in equal measure in the news. More equality between men and women voices in the media leads to better journalism, increased trust from the audience and increased revenue. As of 2015, women make up only 24% of news sources, with news sources where women are most visible garnering the least coverage. Of this 24%, only 19% are expert sources, with the remaining 5% popular opinion providers, eyewitnesses or women sharing their personal experiences. This means that women’s perspectives in news coverage is not taken into consideration which increases their marginalisation.

Why is there such an underrepresentation of women in media? Is it because women are reluctant to appear as experts in the news, due to conditioning by society to think that their voices do not matter? Or is it because they are asked far less often to come on the news as expert sources? Experts say it is the latter. Whatever the reason may be, the most important question is, what can be done to improve women representation in media? There needs to be a more intentional, concerted effort towards improving women representation in the media. This is the responsibility of all parties – newsrooms, journalists, and women experts themselves.

Newsrooms around the world are already taking steps to increase women representation in media. Since 2017, the British Broadcasting Corporation (BBC) has been implementing 50:50 The Equality Project, a collective action aimed at increasing women representation in the BBC. What started with one program and one team has grown to see 70% of BBC content featuring 50% women contributors and include 125 organisations in 26 countries, including the ABC. The 50:50 project was implemented with the basic principles of measuring what you control, sharing data and committing to change, fostered by intentionally inviting (and not mandating) people to join in the challenge. Bloomberg’s New Voices Initiative, launched in 2018, includes a global list of women experts in finance and business, and funding of media training for top women executives and experts, seeing over 300 executives trained since inception. There are also non-newsroom media organisations changing the women representation in media narrative such as Quotethiswoman+, a South Africa based organisation that curates a database of women+ experts for journalists/newsrooms and provides media training for them.

This is not necessarily the case in Nigeria, where women are historically misrepresented, with their roles relegated to domestic activities and caregiving. In Nigeria, the volume of stories written about women in major newspaper dailies like Vanguard, Punch, The Guardian and ThisDay was found to be low, with most stories written about odd issues as opposed to expert stories. The portrayal of women in Nigerian media has also been shown to reinforce wrong stereotypes of weakness and vulnerability, further propagating patriarchal perceptions. This further underscores the need for media organisations and journalists to intentionally portray women as successful and amplify the voices of women as experts and professionals.

In November 2021, Nigeria Health Watch organised the 6th Future of Health Conference tagged #BreakingGlassCeilings, where stakeholders discussed gender equality for sustainable development and proffered recommendations to increase women representation in media. Speaking at the Conference, Chris Ubosi, founder and managing director of Megalectrics, said “Women should be encouraged to seek opportunities in media. There should be training amongst journalists to discourage the current stereotypes and patriarchal ways. Professional societies should be encouraged to put female members forward as resource people”.

Thus, there is a clear and urgent need for newsrooms and media organisations to institute systems and processes that will increase women representation in their content, change the way women are portrayed, and provide training for their journalists on how they can mainstream gender into the content production process. Journalists need to seek women expert opinions more intentionally – this does not reduce the quality of content, but instead, improves it and boosts reader engagement – and communicate clearly to women experts when reaching out to them for interviews so they know what to expect. Women experts need to read and respond to correspondence from the media in a timely manner, as well as lend their expert voices to salient issues as they are being discussed, so that the next generation of women know how relevant their voices are.

Dr Agbaoye is Director of Programmes at Nigeria Health Watch