The five aggrieved governors of the Peoples Democratic Party (PDP) have announced the formation of the Integrity Group. This was announced when the G5 met… 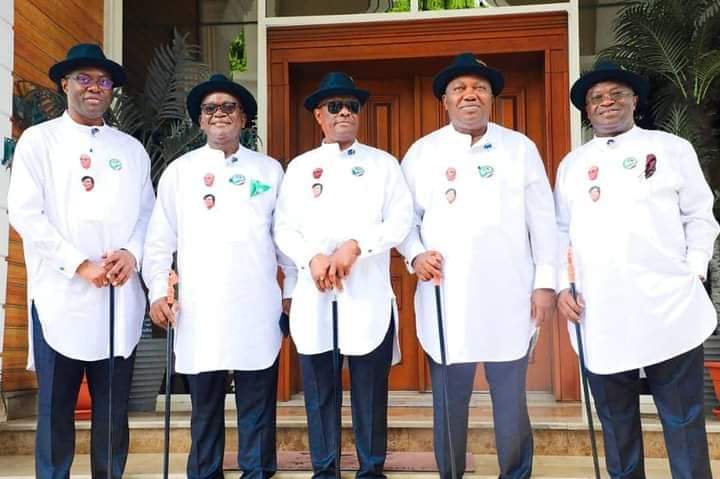 The five aggrieved governors of the Peoples Democratic Party (PDP) have announced the formation of the Integrity Group.

This was announced when the G5 met in Lagos on Sunday.

At the meeting, the group said no going back on the decision not to be part of the campaign of the presidential candidate, Alhaji Atiku Abubakar.

They also demanded the resignation of the party’s National Chairman, Dr. Iyorchia Ayu.

PDP Crisis: A Southerner ought To Succeed Buhari &#8211; Ortom

Former Governor Jang who briefed newsmen however said the window for reconciliation is still open.

“We have reviewed the issues in our party and we, therefore, stand on the position we took at our last meeting in PortHarcourt and we hereby reiterate our position that the window for reconcilation in our great party, the PDP, remains open,” he said.

Speaking before the meeting proceeded behind closed doors, Makinde stated that the G5 governors who were the face of their struggle were being backed by the leaders and elders of the party present at the meeting whom he said are now part of the newly formed Integrity Group.

Makinde said: “We are here this morning to hold a meeting of the Integrity Group within our party, the PDP. You’ve been of the G5 that is the five PDP governors. The G5 is all about the Integrity Group. You can see us, five serving governors, as the face of this struggle but the leaders and elders of the party that you see here are the people behind those faces.

“We are this morning in the South West to review the situation within our party, to review where we are and to also look at what is going to happen in the coming elections. At the end of our deliberations, you will be fully briefed on where we stand on those burning issues. On behalf of our leaders and elders in the South West, I want to welcome members of the Integrity Group…”

The group had at a meeting held in Port Harcourt in September 20 declared it would not be part of Atiku’s meeting.