Governor Ben Ayade of Cross River State has defected to the ruling All Progressives Congress (APC) from the Peoples Democratic Party (PDP). Top members of… 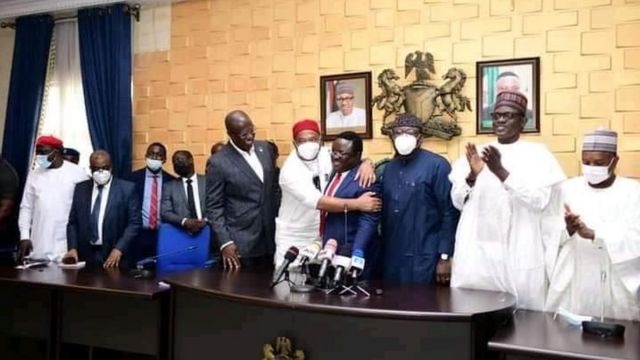 Governor Ben Ayade of Cross River State has defected to the ruling All Progressives Congress (APC) from the Peoples Democratic Party (PDP).

Top members of the ruling party, including governors and senators, are currently at Government House, Calabar, where the defection was finalised.

At the end of a meeting with the APC stalwarts, Ayade chanted: “APC!” as clap and

Among the governors who are in the state are Kayode Fayemi (Ekiti), Simon Lalong (Plateau), Hope Uzodinma (Imo) and Abubakar Badaru (Jigawa).

They were led by Governor Mai Mala Buni of Yobe State and chairman of the party’s Caretaker Committee.

Some commissioners and PDP bigwigs expressed shock over Ayade’s decision but said they would move with him to the ruling party.

The development has reversed PDP’s dominance of the South-South as the opposition party controlled all the states in the region before the defection of Ayade.

APC has now recovered from the defection of Governor Godwin Obaseki of Edo State who defected to the PDP from APC shortly before his reelection.