Reports say that former Vice President of Nigeria, Dr Alex Ifeanyichukwu Ekwueme, is dead. He died at the age of 85. His brother and the… 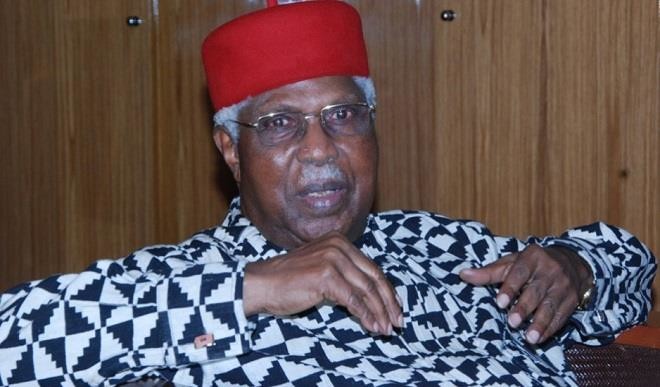 He died at the age of 85.
His brother and the traditional ruler of Oko in Anambra State, Igwe Laz Ekwueme, said the former Vice President, died by 10:00pm in a London clinic, on Sunday.
In a statement, he said: “Ekwueme family regrets to announce the peaceful passing away of their patriarch, the former Vice-President of the Federal Republic of Nigeria Dr Alex Ifeanyichukwu Ekwueme GCON.
“The sad event occurred at the London Clinic at 10:00 pm on Sunday 19th November 2017.”
The 85-year-old architech, was the first elected Vice-President of Nigeria, in office from 1979 to 1983.
He slumped in his Enugu residence, and immediately taken to the Memfys Neurosurgery Hospital Enugu, where he relapsed and went into coma.
As soon as he was stabilised in the hospital he was flown to London in an air ambulance last week.
Ekweme who was Vice to President Shehu Shagari were ousted in a coup staged by present President Muhammadu Buhari who was then an Army General in 1984.
The attended the University of London; King’s College; Lagos, Nigerian Law School; University of Strathclyde, University of Washington
He is the Ide of the Oko kingdom in Anambra State, where his younger brother, Lazarus, is the traditional ruler.
He was also honoured by the council of Traditional Rulers in the old Aguata as the Ide of Aguata Local Government Area of Anambra State comprising forty-four (44) towns.
Ekweme is a distinguished architect who started his professional career as an Assistant Architect with a Seattle-based firm, Leo A. Daly and Associates, and also with the London-based firm Nickson and Partners.
He worked briefly with ESSO West Africa, Lagos, overseeing the Construction and Maintenance department.
He founded Ekwueme Associates, Architects and Town Planners, the first indigenous architectural firm in Nigeria.
Before he was flown to London for treatment, reports said he had died but the family denied death.
The family said Ekwueme is alive, stable and responding to treatment, quoting an official of Memfys Neuro-surgical Hospital in Enugu, has said.
The official told the News Agency of Nigeria (NAN) in Enugu that ”Ekwueme is still in Memfys Hospital”, even though President Muhammadu Buhari has ordered he should be flown abroad for better care.
He was admitted into the hospital for chest infection.
Also officials of the hospital said he was recovering and doing well.  “People should not spread false information. The family members are always here,” the official said.
Ekwueme, was later flown abroad for further medical treatment.
The News Agency of Nigeria (NAN) reports that the elder statesman departed the Akanu Ibiam International Airport, Enugu, around 8:30 a.m last Sunday in a white air ambulance with registration number N605AJ.
President Muhammadu Buhari had approved that Ekwueme should be flown abroad for treatment.(NAN)