Since July 9, 2009, the beginning of the Boko Haram insurgency, Borno State, our beloved home of peace for decades, suddenly became a theatre of… 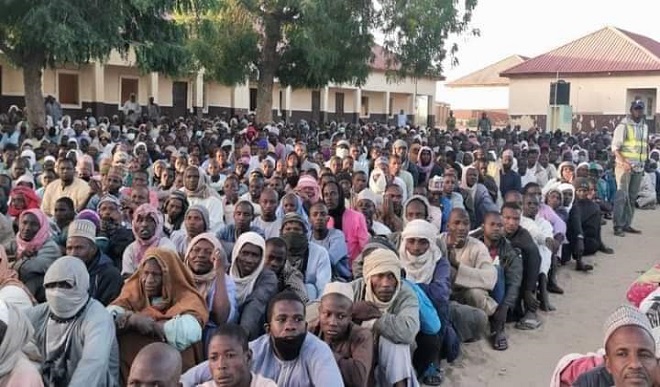 Section of Beneficiaries of food donation by Borno state government

Since July 9, 2009, the beginning of the Boko Haram insurgency, Borno State, our beloved home of peace for decades, suddenly became a theatre of war. It witnessed massive killings of innocent lives and the destruction of properties and valuable infrastructure.

Some peace was restored after a long period of agony and uncertainty, thanks to the gallant efforts of our patriotic Nigerian military, the police and other security agencies as well as the UN and its relevant agencies, other development partners and civil society groups.

As harmattan season sets in

For more than half of the present democratic dispensation, the good and suffering people of Borno State did not enjoy much peace, law and order because of the on and off insurgency activities of Boko Haram/ISWAP insurgents.

All the same, the good people of Borno State are looking forward with great/positive expectations to the 2023 general elections because of the renewed commitment of INEC and the security agencies to conduct peaceful, free and fair elections. Also, the President and Commander-in-Chief of the Armed Forces made his own commitment to free, fair and peaceful general elections.

Unfortunately for the good people of Borno State, their hope and great expectations of free, fair and peaceful general elections in 2023 in the state is totally misplaced and this is demonstrated by the vicious and sustained attacks on the convoy of former vice president and presidential candidate of the PDP for the 2023 general elections, Atiku Abubakar.

Nobody would believe that such vicious and sustained attack can be contemplated by any group in broad daylight from the Maiduguri International Airport entrance up to the Shehu’s Palace. They were not, the political thugs, afraid of being photographed by anybody. All sorts of people have captured the evidence of this vicious attack. I learnt that of the more than 100 people injured three have died already and many vehicles including buses for the V.I.P conveyance sent by the Bauchi State government on request by the PDP Borno State chapter, were vandalised.

The authorities must ensure this incident of November 9, 2022, in Maiduguri is investigated properly and those guilty are prosecuted promptly. Otherwise, we cannot pretend there is true and genuine democracy in Nigeria. Confidence in our institutions can only be restored by bringing the culprits to justice without delay.

There are sincere and genuine indications that all the relevant agencies/state actors, development partners and civil society groups are willing and assisting in applying the full weight of the law in this ugly incident. The good people of Borno State, the political parties in the state and civil society groups are ready and willing to assist the relevant authorities to bring to justice these undemocratic elements in the state.

The great and progressive Borno people have been deprived and put down for more than 10 years by the killings, destruction and oppression of Boko Haram/ISWAP insurgents. It is a great pity and tragedy if from amongst the politicians some undemocratic elements will emerge to continue the unnecessary killings, destruction and oppression of our people just as we are hopefully coming to the end of Boko Haram insurgency and start the reconstruction and economic development of dear Borno State.